Sick. Day, uh.. 10?
The gunk has moved out of my lungs and now inhabits my sinuses. I am tempted to drill holes in my skull, but I am no closer to coming up with a mathematical model for g*d based on the Torah so I am not going to go full Maximillian Cohen just yet (look it up).
According to my friends, this pervasive bug likes to come and go in waves. My good friend Elliot's fiancé had it for three and a half weeks, and Prez's wife had it for over a month. I have a feeling my current house-guest, a former coworker who I am helping out while he coördinates the move from the peninsula up to the city and county of San Francisco, has been incubating this disease for many months now, occasionally reinfecting himself and all around him.
Short of taking Andromeda Strain like measure, will this bug ever kick? Being in insurance limbo, I will not be wasting my time to have a doctor tell me to rest and drink lots of fluids, beyond antibiotics as this infection likely is. 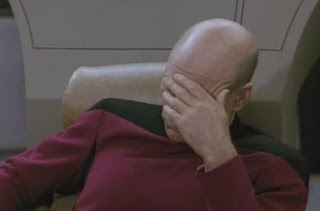 I feel like this from the moment I wake (from fitful, restless "sleep") to the moment I decide to cover myself in blankets and pretend to become unconscious (about 20 minutes later).
But tomorrow is back to gym, hell or high water, and I have one hail Mary left in the pantry: the moonshine toddy.
I am lucky to know a number of people in the food and beverage industry, in the service industry. Recently my old pal Yakov was at a food and beverage industry conference hawking his revamped formula for Lev's Original Kombucha, as well as hawking a Victorian era concoction called a "shrub" made with sweetened, flavored vinegar and a neutral spirit, such as vodka or gin. It just so happens that Lev's makes a pro-biotic vinegar - a natural byproduct of the Kombucha brewing process.
I don't want to denigrate the hippies that make most of the wretched garbage that passes as Kombucha in today's market, or the ubiquitous, treacle sweet mass produced garbage that is omnipresent in SF, LA, NYC and major up and coming markets where Kombucha is sold made by opportunistic hacks. No, I certainly don't want to diss those other Kombuchas. But I have to, because most of them suck. Lev's Original Kombucha. Demand it by name.
Side-note: I know I am going to catch shit for advocating drinking "that peasant swill" as my friend Hep calls it. Hep, perhaps if you had the good stuff you would change your mind.
This post is not about Kombucha or Lev's, however, but that Yakov scored me a 1/2 gallon jug of Wilie Howell Whiskey for Hanukka this year (officially, I celebrate Festivus and Pastamas).
Wilie Howell was a moonshiner and bootlegger operating during the prohibition of some infamy. The story, here on the web page, should come along with Uncle Tupelo, Jason Isbell or Hank Williams III playing loudly in the background. The story is over the top Americana. A sample:
I'd take some nice pictures of the preparation but I'm sitting in darkness in my pajamas watching The Layover (this week: San Francisco!).
Here's the ingredients and method:
Mix ingredients in a travel mug or thermos.
Mix gently with a cocktail spoon. The thermos will keep your toddy nuclear hot. This is key: booze, lemon juice, honey and heat. Turn off the lights, wrap yourself in a blanket. If one doesn't work, make another and queue up Downton Abbey.
Email Post
Labels: cold/flu hank williams III honey jason isbell jason isbell and the 400 unit kombucha lemon lev's original kombucha shrub toddy uncle tupelo whiskey wilie howell whiskey