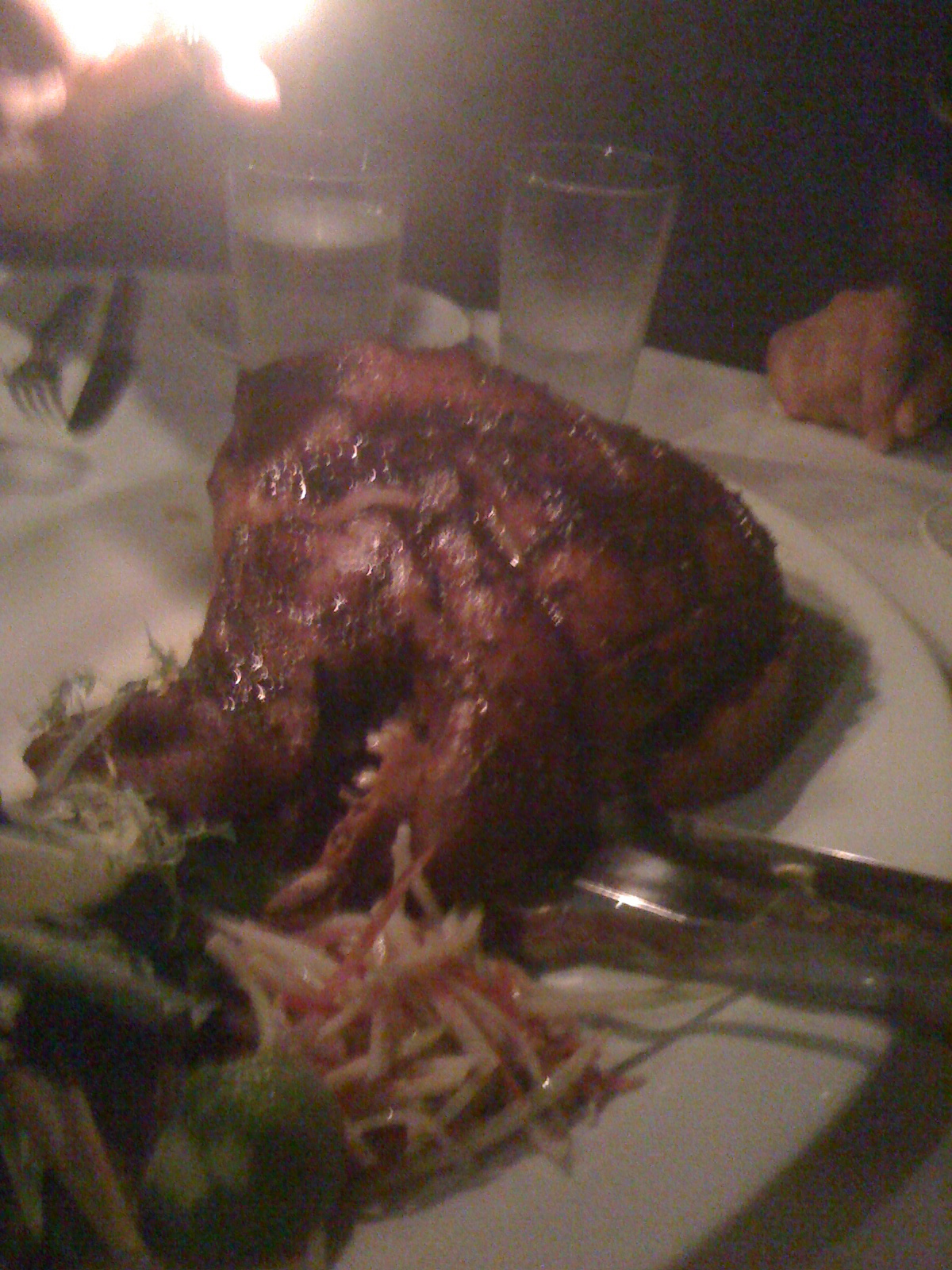 On the left is a grainy photo of a pig's head. Here's a better view that someone else took: pig head!

Half a hog's head is a heavy cut of meat. The cheek itself can weigh over three pounds. The whole thing is maybe seven or eight pounds, plus bone and gristle.

The pig's jaw gets a lot of work, as do many other muscles in the head of a pig. Muscles that work hard contain more connective tissue to anchor them to the other muscles and the skeletal structure.

At the Greenhouse Tavern in Cleveland, when we eat meat we eat the half-pig's head (call and order in advance; this is not always available).

Many hours of braising are required to cook it, and because it's impractical to hold the meat at serving temperature, about an hour is required to reheat it before it comes to the table.

Which may explain why I was as drunk as a monkey when I took this photo at a table that included me and about 15 or so of my best friends.

Moreover, we had eaten almost everything else on the menu.

Chef Jonathon Sawyer's respect for "the whole hog" is understandable given his pedigree: a Cleveland chef who has worked beside grinning maniac, and pork-lover, Iron Chef America Michael Symon, whose Lola Bistro is a mere three doors down on the E. 4th St restaurant alley. Noodlecat, Sawyer's other restaurant (also co-owned by wife Amelia), is located around the corner on Euclid Avenue.

Sawyer also has fully embraced, and is in many ways on the vanguard of, the movement to locally source ingredients.

Incredibly, after nearly three hours of Romanesque grazing and goblet clinking, we ordered a round of desserts. All of the desserts are made on site. Frequent themes include seasonal fruit tartes, pots de creme, and a variety of ice creams and sherbets. Twee and clever are eschewed for rustic and flavorful. Hey, it's Cleveland: I want dessert, not architecture.

Thankfully, the Greenhouse Tavern is among a growing number of Cleveland restaurants and bars that stock Fernet Branca. You'll probably need one after dinner.