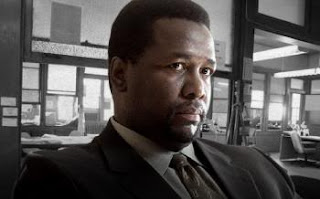 Like my avatar, Detective Bunk Morland, I am a large man who delights in junk food and Jameson. In my teens and 20s, this behavior was relatively consequence free.

Actually, that's a lie, but this is not the place to detail the sordid details of my misspent youth. That place is LiveJournal.

The truth is, I am a fat fattie. I watched Ricky Gervais mock fat people mercilessly for torturous long minutes during his recent HBO special until I recalled that he himself was quite portly in the not too recent past.

Well, as the sun sets on my fourth decade I have decided that I will maybe attempt to begin to think about getting into shape.

Inertia seems to be the largest factor for people like me. Getting the foot in the door is the first step. Getting my big, swollen fat foot out of bed, onto the bike peddle and over to the gym. So I joined the gym. I actually did that. Bravo.

I also recently stopped working. The conundrum is that cheap food is, well, shit.

Let's examine how we eat, shall we, for a moment? By we I mean Americans in general, the country that has put McDonald's in every corner of the globe, invented the KFC Famous Bowl ("failure bowl of sadness", according to fellow portly American Patton Oswalt). We have taken the Japanese innovation of high fructose corn syrup (thanks, Japan!) and made it the world's most ubiquitous sweetener.

I come from Cleveland, Ohio. Dairyman's Grape Drink is king for children of all colors and backgrounds, but especially so the lower down the class echelon one goes. We drank it in elementary school. According to skinny comedian Dave Chapelle, drink has three ingredients: water, sugar, purple. You can get a half gallon of it for probably less than $2. Ramen is cheap. A Big Mac and fries is cheap, and they throw the bucket of fizzy sugar water at you for practically nothing. $0.02 cents of HFCS, the cup probably costs more than the ingredients.

It is hard to both eat healthfully and cheaply, and Coca-cola is fucking delicious. I know, I had one tonight. Shame.

But one endeavors to remain honest and as the Internet as my witness I will go to the gym.. probably not tomorrow but the day after, I'm still beating a cold. I think they don't like sick people at the gym.
I actually like the gym. It's not all hot yoga girls and buff, waxed men (that's the gym down the street closer to social gaming ground zero). My gym is middle-aged Mexican women, a 400 pound 6'4" comic book super-villain (my friend and colleague Veggie), UPS employees, neighborhood folks and average bodies, many of them portly themselves.

And fat people, hear me when I say this: you feel good after a work out.

So that's who I am, that's what I am doing, and let's hope that this blog tracks my magical transformation from lardy tub-ass to smugly handsome gadabout svelt sex ninja.

This week: using root vegetables to make pasta. Because I love pasta, and I don't eat enough vegetables. And kids love it! I know, I delighted my friend's kids with these over the holidays and in return they made me deathly ill. Thanks kids! Merry Christmas.