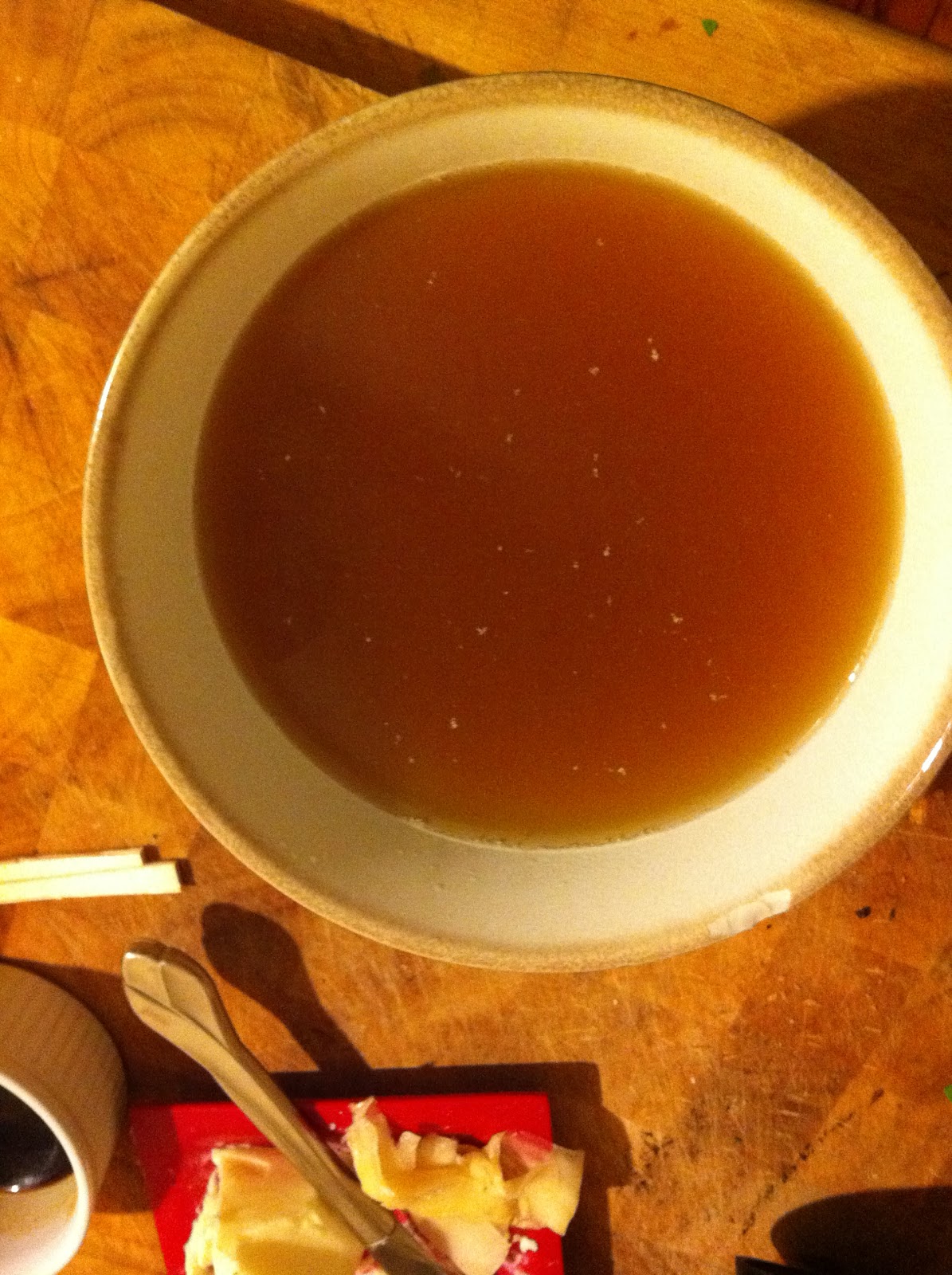 Consommé is an unhip preparation of stock. For me, it evokes an age of cooking and preparation that is nostalgic: maybe there never was a time when Amelia Earhart and William Howard Taft would sip consommé and eat lemon bars and cucumber sandwiches at high tea.

It's a fussy, hours long preparation one can see hapless servants slaving over in costume pieces from Amadeus to Downton Abbey.

But done just right and boy is it worth is. Especially when you discover that your apartment is harboring pneumonia.

Consommé is much more than throwing some bones in some water with maybe some aromatics and boiling it for a few hours then straining it. That will produce a functional stock.

If you plan on making soup immediately, this should be all that's necessary. However, to extend the shelf-life of a stock (and also to be able to take more liberties in the stock making process in terms of skimming and temperature control), you need to add a few steps in order to clarify your stock to remove any proteins that will cause it to spoil faster. The result of this process is creating a "Consommé".

Thanks for that musical interlude, friends of Chowbacca!, The Handsome Family. If songwriter/bassist/player of obscure instruments/sometimes lead vocalist and wife in the husband/wife duo The Handsome Family, Rennie Sparks ever were to publish a cookbook, we would be first in line to buy it.

Hopefully you can hear my head clearing up over the course of days it took to make this (freezing and thawing in between some steps to push the "pause" button as it were).


Chilling the stock in between steps also allows me to easily take off the excess fat, something that I should have done had I not been confined to bed like some Dickensian child with the consumption. A chef pal told me he skips clarification in lieu of freezing the whole mess after the first straining and then letting it melt over a colander lined with cheese cloth, but I haven't tried that and I'm not sure how well it works with my super gelatinous stock (I'll save several animal carcasses - 3, sometimes 4 chickens plus random bones - ham, ox tail, left over ribs from rib eye or côte de boeuf, etc).

Hey so, how about those 49ers? Yeah. Sorry, can't be bothered. I was sick so I watched Firefly all day long on Sunday. Here's the next part of the assemblage:

Clarification:
That is for 5-6 quarts of stock.

So, it seems that River is some kind of psychic weapon. The crew is uncomfortable with her presence but when a bounty hunter takes Serenity hostage, River's skills prove valuable. And on with our show:


Sorry, "spoiler alert". Look, it's been almost 10 years the show's been off the air. If you haven't seen it, you don't know what the hell I'm talking about (as if it isn't obvious what River is from the start.. the girlfriend all us nerds wish we had in high school. Speaking of, she reminds me a little of the Polish girl I "dated" in third grade who is now some kind of 12th degree yoga ninja, and the very odd drama-club girl who I was painfully platonic with in 10th grade, already a habitual LSD user who would punctuate her speech with things like "your religion is broken" a'la River.) 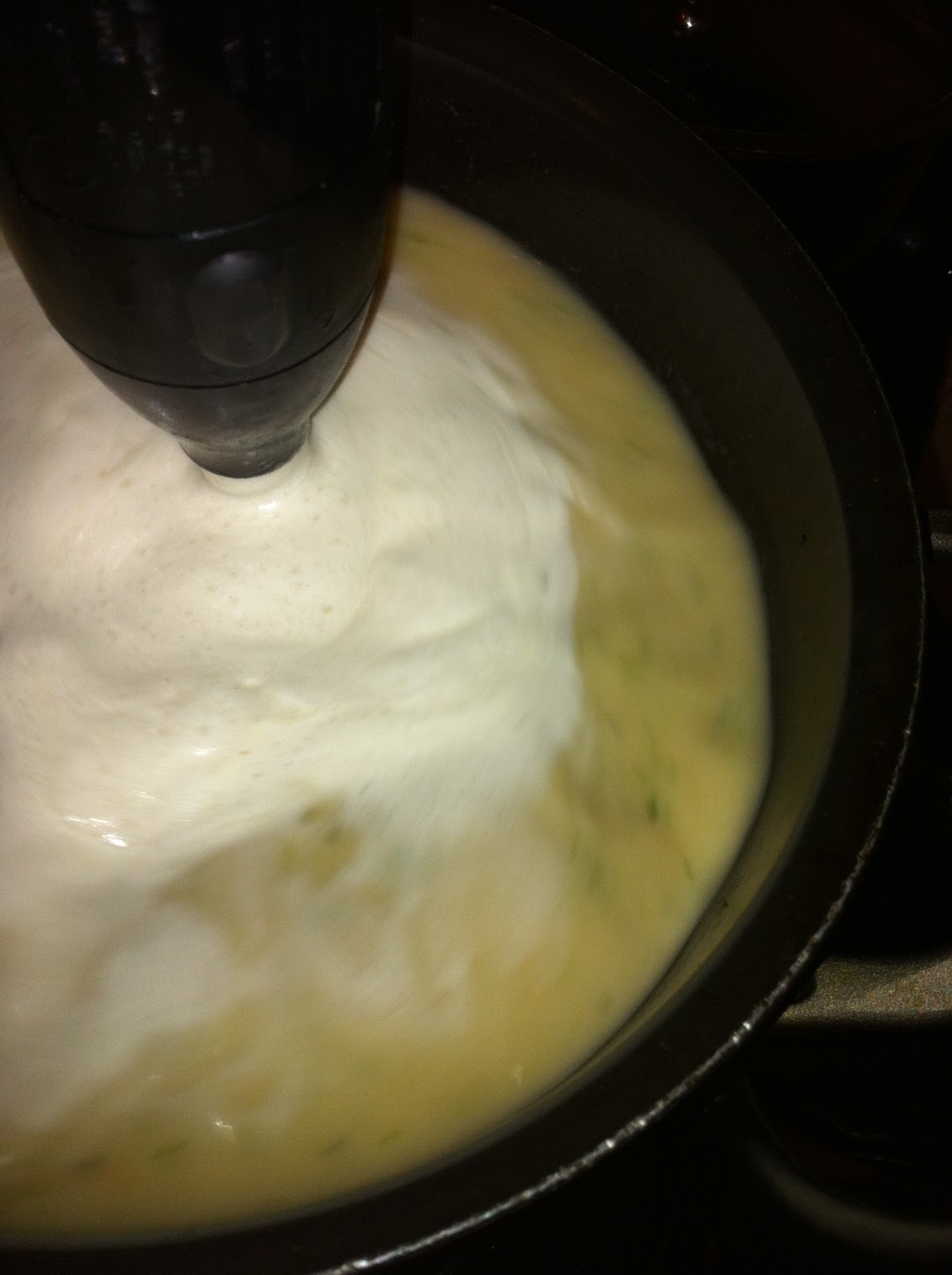 The heat is on as hot as she'll go (captain) and I'm blending this sucker up for a good 5 or 7 minutes. As soon as the foam looked like it might be beginning to cook on top, I turned down the heat and gave the whole works a vigorous folding with a balloon whisk.

At medium heat, after about 10 minutes, this: 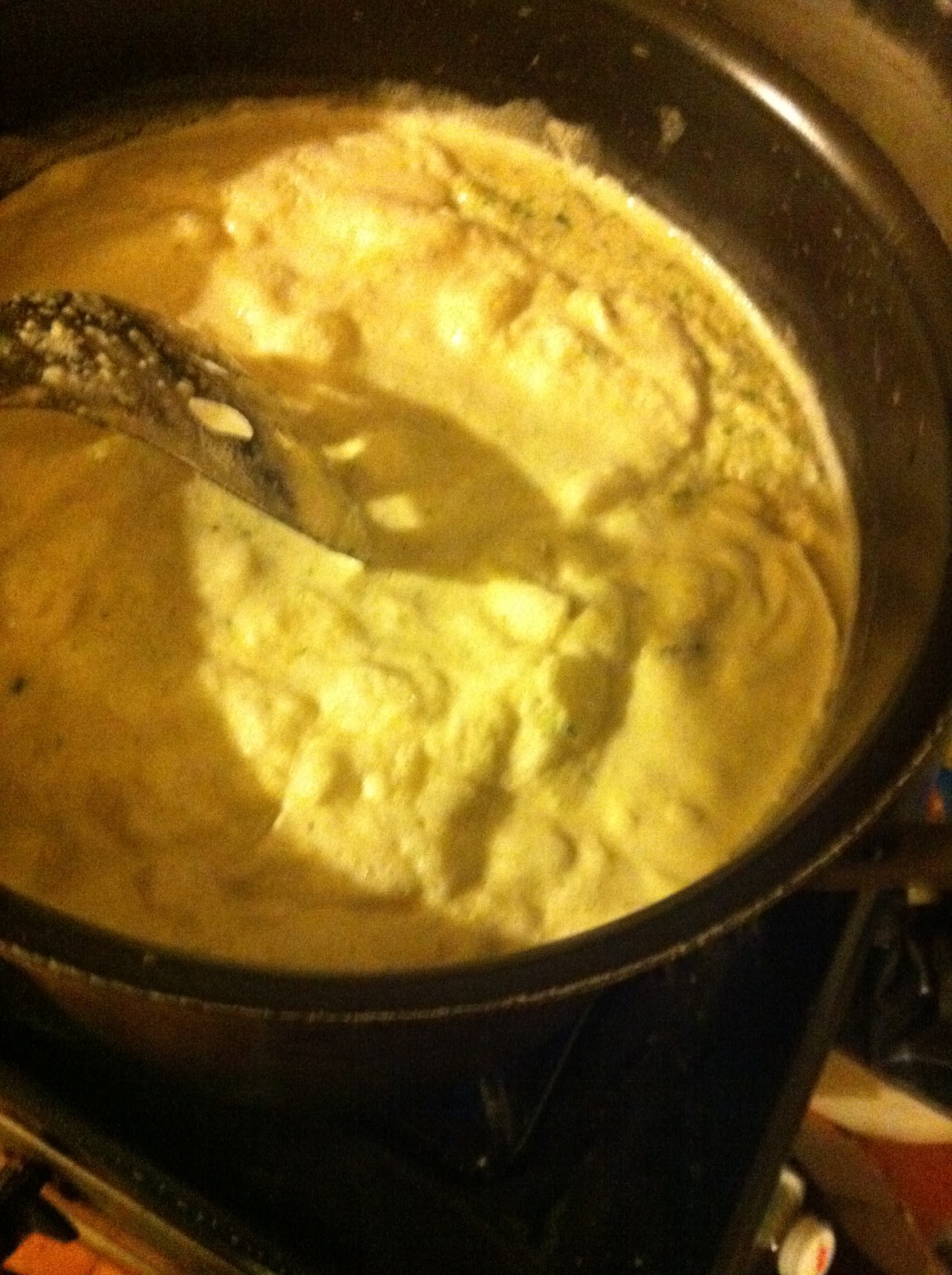 Now the "raft" is really starting to form up, after about 20-25 minutes, I lower the heat: 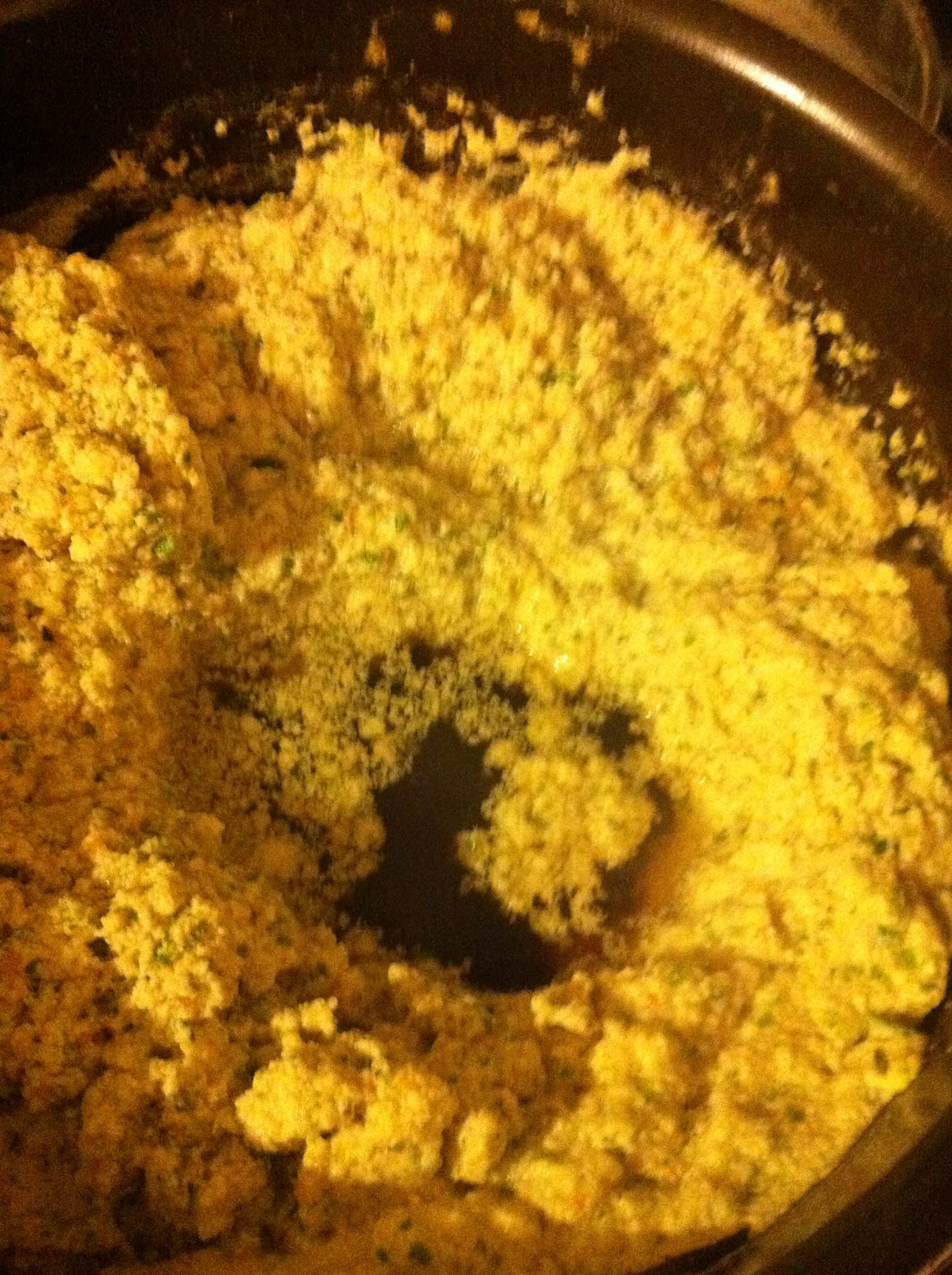 Notice I've formed a sort of release valve "hole" in the top. Without it, heat will not be able to escape and the raft will act as a sort of pressure cooker for the liquid below. Eventually the pressure will be too great and the stock will "boil over", downing the raft. The raft then could burn on the bottom of the pot, and the whole thing would be ruined. Make sure you vent your raft and occasionally baste your raft.

Notice how clear the stock is looking. You can let this simmer for up to an hour or so then strain: 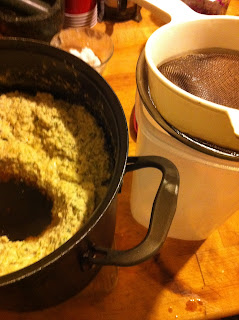 All is well with the world. The SF 49ers eek out a slim, back and forth victory over the Saints, propelling my city once again toward another sports championship. Firefly has looped back to the first episode it played earlier today, repeating the loop in prime time. I have retired my beer for home made ginger beer, for I shall be up early the next morning shooting hot lead out of firearms of questionable legality with a bike gang. But that's a story.. for LiveJournal.