Pork belly. The words make me all fuzzy and warm. And drooly.

For years now I have wanted to cure my own pancetta. In fact, a few years ago I bought a refrigerator to use solely for curing, brewing and other cold food experiments I might dabble in. "So where is the pancetta?" I ask myself. I have no idea. I lost touch with my original source for pork belly; time, distance and kids got in the way; and the project got put back on the shelf.

Then, last week I had dinner with one of my oldest and dearest friends, Susan.

We stopped by the Koreana Plaza at 28th and Telegraph in Oakland to find a Korean clay soup pot to ship off to our old friend Bruce in Cleveland. It would be a perfect gift because the man loves all things soup and cooks exclusively in a single wok, despite being a European mutt from the West Side of Cleveland, a region best known for its love of kielbasa and perogies and less for embracing Phở and Bibimbap.

Also, I needed a few things for my kimchi project -- and what better place than the Koreana Plaza?

On our way to the household items section of the plaza, I became mesmerized by the meats, kimchi and other treasure tantalizingly displayed near the entrance of the store.

I should have grabbed a shopping basket. When we checked out my arms were bursting with items, Susan had been pressed into service to handle the overflow.

Yes! Pork belly.. the price was right and I could not pass it up.

The next morning I inspected my treasure: two packs of truly beautiful, sliced pork belly.

Since the pork belly was pre-sliced, hanging it to cure like pancetta was not an option: it would dry out far to quickly, leaving me with pork jerky.

Instead as an experiment I thought I'd try a refrigerated cure similar to the what I did at Liberty Cafe when I worked in the kitchen a decade ago.

I laid the slices out and massaged kosher salt and pepper on both sides.

I then re-stacked the slices, tucking a sprig of fresh thyme between the layers.

I bundled the slices tightly in parchment paper before sending them to the spare refrigerator where they would cold-cure. 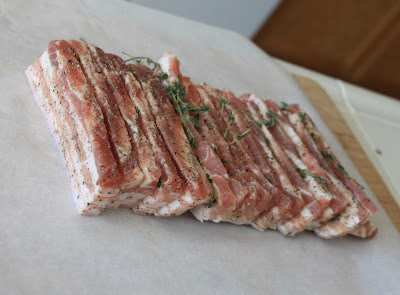 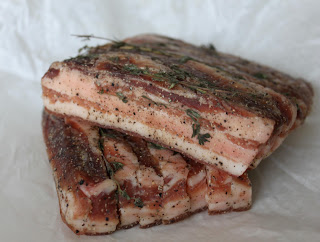 The moment of truth: opening the parchment paper.. magical.. cured to perfection!

My husband had a good laugh at my inability to contain my extreme excitement and glee upon witnessing the fruits of my labor.

I took a few pieces out, trimming away the skin.

I laid the cured belly slices and the pork skin slices in a cold cast iron skillet, slowly cooking over a med-low heat.

The rashers, or slices, of pork belly finished cooking first, so I removed those and cranked up the flame to crisp up the strips of skin. 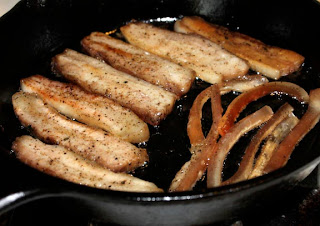 The skins fried up puffy and golden like match stick cracklin' French fries.

A freshly fried sopes and eggs over-easy accompanied the rashers of pork belly -- high on my husband's list of favorite breakfast items. As a special extra little treat, I garnished the whole works with my cracklin' fries.
What to do with all the rest of this pork belly? Maybe I'll smoke some of it and make some sort of Frankenstein bacon.

Of course, pre-sliced pork belly is not the same as having the whole sub-primal and the trek to Oakland is just a bit too far to get it, so my search continues for a local source.

Some day, some magical day soon enough I will have a massive roll of pork belly happily curing in my spare refrigerator. Until then...

[ Editor's note: If like me you live in San Francisco, pork belly is relatively easy to find. I special order mine from either Drewe's Brothers Meats or Olivier's Butchery. In the San Joaquin Valley, Wolfsen's can't be beat. Wherever you live I hope your town still has a local butcher. It's a magical thing.]