The Return of Original Joe's

Back in 2007 San Francisco lost a little something when our beloved Original Joe's was destroyed by fire at its Tenderloin location on Taylor street. It was the kind of place where street hustlers and city hall snakes bought martinis for each other over steaks and chops. I could tell you stories.

I'd been anxious to get to Joe's new location on Union street since the buzz about its reopening began. Yesterday I made it by for lunch and I was pleased to see that while it was a cleaner, street hustler-free establishment it still had that old school dining feel. The corner spot in North Beach once occupied by the venerable Fior d'Italia and the forgettable Dimaggio's was not quite the Original, but felt more like Joe's Reborn.

With a cozy fireplace and feel the updated dining room was both welcoming and clubby. The staff was friendly and helpful and the Manhattan's were huge.

The food was delicious and for the most part was reasonably priced. In fact there were several items that were priced a few dollars under what I've come to expect from San Francisco menus, but taste was what I'd come for and Joe's delivered. The crab cakes were delicate and flavorful. The sweetbreads were creamy and tender. The lamb chops were delightful and even the sides of spinach and ravioli were noteworthy. A perfect amount of garlic really made the spinach something special.

For dessert we took our server's suggestion and had the butterscotch pudding. If dessert had been all I'd eaten it would have been enough to get me back in the door. 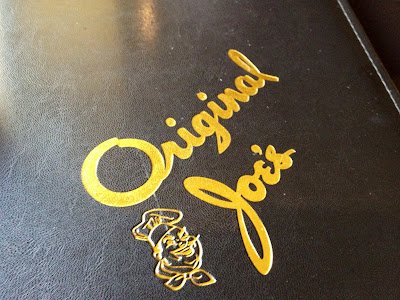 So, raise a glass to the new old school. Welcome back, Joe's.

Do you have stories from the old Joe's? Leave a comment and tell us all about it!
Email Post
Labels: Crab Cakes Lamb Chops North Beach Old School Original Joe's Ravioli Rye Manhattan San Francisco Sweetbreads