"Cavorting, wee beasties" proclaimed Anton van Leeuwenhoek in or around 1674, fully 401 years before this writer's birth, as he peered at microorganisms through microscopes he would fashion in his workshop. While not, as sometimes credited, the inventor of the microscopes, Leeuwenhoek, a mere Dutch craftsman, was the first to recognize microorganisms existed and cataloged a great many of them.

Likewise, Dom Pierre Perignon, 14 years Leeuwenhoek's junior and a Benedictine monk, cannot rightly be sited as the inventor of sparkling wine (at least one example is documented prior to méthode champenois) he is legendary for codifying it - even if the process was not officially written down until the 1900s.

Leeuwenhoek's mother's family were brewers, and that's probably where the similarity between him and the good friar end other than that they were both tinkerers of a sort, practitioners of esoteric craft: Leeuwenhoek would put anything he could under his microscopes, including the teeth of his daughters; Perignon spent a lifetime mastering the craft of making the perfect sparkling cuvée of pinot noir from Champagne, France.

Although Perignon's name is more familiar to us that the chewy Dutch monstrosity of Leeuwenhoek (just kidding, Dutch is a beautiful, lyrical language and the Dutch are a fine, industrious people), Leeuwenhoek's discovery of microorganisms had a much more profound effect on history.

Leeuwenhoek's contribution to microbiology can be traced along a clear path from that lucky Dutch day in 1674 to my kitchen in 2012, where I employ billions of "wee beasties" for many nefarious ends.

Worth mentioning, but we will not be going into this detail at the moment, that microbiology lead to the development of Saccharomyces cerevisiae which is used in the Alton Brown version of this recipe, the yeast I prefer are wilder beer yeasts found in Belgian bottle-conditioned beers, or in the air, or on fruit.

My current "mother" (or as one baker refers to his starter, "chef") contains yeast and lactobacillus from beer (I believe I used Hennepin) and from Lev's Original Kombucha (that's another drink you owe me, Yakov).

I'm going to describe how I start my ginger beer "mother", how I brew my ginger beer and how you can lager it over several weeks and months to produce a low-alcohol ginger lager.

His method: melt the sugar with about 1/4th of the water in a sauce pan, add the remaining water and bring to a boil. Turn off the heat, add the ginger and lemon juice and cover for an hour to let cool. Once at room temperature, strain, pitch the yeast, mix and bottle.

My method uses roughly the same ratio, but I bottle only in empty beer growlers or recycled 1/2 gallon glass liquor bottles. Because I steal yeast from various sources, my length of carbonation may be longer than 48 hours.

My ginger beer begins with proving a starter of wild yeast or yeast from a dormant source like a bottle-conditioned beer. 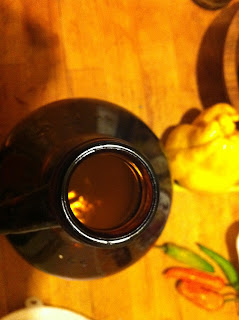 When we say bottle-conditioned, we mean that instead of injecting CO2 into the beer after fermentation to provide fizz (as is the standard practice for most commercial beers), we allow the yeast in the beer go through a second fermentation after racking, or bottling, the beer. This is accomplished through adding a precise amount of sugar to each bottle and racking the beer, unfiltered, into that bottle then capping it.

Too much sugar, and the yeast will produce so much CO2 that your bottle may burst. Too little, and you won't get enough fizz.

We think of beers as being fizzy, but carbonated beer is a recent development in beer history (within the last few hundred years). Before we understood how yeast worked, carbonation was largely accidental -- same as with wine until méthode champenois came to be.

I can't say authoritatively when ginger beer appeared on the scene, but most sources seem to agree that the drink was invented and gained popularity in England during the 1700s. This drink is close to what I make and different than the standard "ginger ale" on the market today in that it was a fermented "soft drink" that contained some alcohol.

In the 1800s, along with the first primitive refrigerators (whose essential component was the compressor) came artificially carbonated soft drinks that had no alcohol. CO2 was injected under pressure into bottles of kegs of soft drinks.

That's fascinating and all, but without further ado let's get to the good stuff.

Buy yourself a glass 1.75 l bottle of some sort. While the Dottore Gustavo household are Smirnoff drinkers mostly, the metal bottle cap can rust during the brewing process giving the batch an off taste. A plastic capped glass Jim Beam finger-jug works well, or Svedka, or if you were like 99% Bittersweet, you would have a number of empty bottles of Sailor Jerry at hand.

While you are at the booze store, find a good unfiltered, bottle conditioned beer. I prefer getting this in a 750 ml format bottle. Hennepin, La fin du Monde, Chimay Cinq Cents, Maudite, Ephemere, Lindeman's Cuvée Rene are all good choices. Inspect the bottle for sediment on the bottom, you'll need that later.

Dispose of these in whatever manner you find fit - but let's have some cocktail recipes since you will soon have quite a lot of ginger beer, which happens to mix nicely with bourbon, vodka and rum: 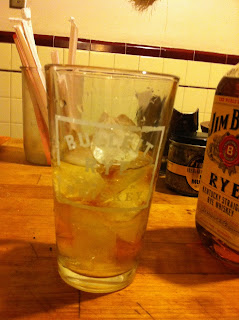 Mix in the order of ingredients, do not stir. The carbonation does the stirring. Garnish with a lemon slice.

Same as above, but garnish with lime wedge.

Once you and several of your best mates have emptied the 1.75 liter jug.. go to sleep you drunk bastard. Wake up, scramble some eggs, plenty of hot sauce, buttered toast and a strong cup of coffee.

Ok, you earned it - why not have some hair of the dog? Open your 750ml of beer and drink 3/4 of it, pouring it into a glass and not drinking from the bottle you savage. Warm 3/4 cup of water for 30-45 seconds in the microwave in a clean pint glass. The water should not be hotter than 100f. Add the remaining 1/4 of the beer, which you have shaken up to collect all the sediment on the bottom of the beer bottle. Add 1 tablespoon of sugar and stir.

This should wake up whatever yeast was in the bottle of beer. There are other, lengthier ways to prove this kind of yeast, and of course you can also try to capture yeast from the air, from organic fruit (eg, grapes, apples) or at a brewer's supply shop. 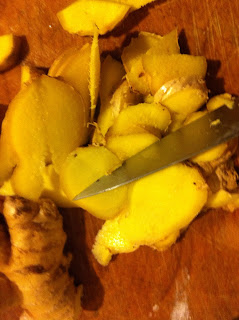 When the french press is warm but not hot to the touch, you can plunge the lid. If you want to take the temperature, we're looking for no hotter than about 100f. Add the warm ginger "tea". Using this method, you don't have to mess with strainers, but I do like to press firmly down on the ginger to get all of the goodness out.

Stir your beer/water/sugar mixture and add it into your 1.75l bottle.

Lid your 1.75l bottle and give it a good shake.

After 24 hours, loosening the lid should release some gas. Once this starts, release extra gas twice a day for 5 or 6 days. Then, refrigerate. Your ginger beer is ready to drink.

If you have the patience, rack your growlers or 1.75l bottles of ginger beer and let them age for two or three months in the fridge. The yeast will very slowly convert more and more of the sugars in the solution and settle on the bottom. This is what we call "bottom fermentation" or "lagering".

After three or more months aged in this manner you will have a beverage that resembles a lager or Pilsner more than ginger beer - but with a refreshing ginger flavor. I haven't taken Brix measurements on the product, but my guess is the final product could be has high as 3-5% alcohol. 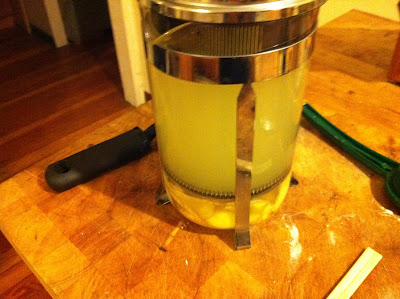