If you are like me, you probably grew up thinking that Lucky Charms was the national dish of Ireland, and perhaps when you became more mature (like, 30 or something), you came to the conclusion that it was corned beef and cabbage.

But you'd be wrong. It's Irish stew.

We at Chowbacca! have been craving the iron, vitamins and calcium triple-punch you get from the favorite green leafy vegetable of our pal Kaptain Kale, so we decided to go another route for St. Patrick's Day related cuisine and make us up a batch of that good colcannon - in my opinion, the dish that ought to be the national dish of Ireland.

Colcannon, also known as Kale Colcannon (which is like saying ATM Machine or PIN Number...think about it) is a dish made of smashed potatoes, kale, cream, butter and perhaps some cheddar, with aromatics such as leeks and shallots. 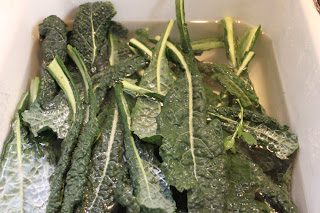 The redundant "Kale Colcannon" construction came about because some recipes (especially those from the dark ages before Kale was King) use cabbage instead of kale. The reason for this is because in Gaelic both our green-leaf heads of cabbage and the leafy, thick, deep green leaves are called "kale" - indeed, the two are in the same family - but the traditional Irish dish features the latter, not the former.

Not that cabbage and potatoes are not themselves delicious: they are. However, it is the nutritional benefits of kale (absent from regular cabbage) that make kale the King of All Green Leafy Vegetables. Namely, calcium.

Just a moment ago you thought Lucky Charms were the national dish of Ireland. Well, I'm going to blow your mind...get ready, because here it comes: milk is a terrible source of calcium.

Milk - and do not get me wrong, I love milk and I love its myriad by-products: butter, cheese, gout, IBS -  milk is a terrible delivery agent for calcium.

Next time you are in the supermarket, examine a quart of milk for the following words: fortified...vitamin D...calcium added...

Why do we need to add vitamin D to milk? Because the calcium added to milk cannot be absorbed otherwise. But, there's plenty of that and other vitamins in kale, plus an incredible amount of calcium, and you don't have to add anything (pinch of salt and a little lemon juice is nice, though).

Moreover, you probably shouldn't be drinking milk unless you are a small child. Lactose is the sugar in milk and lactase-phlorizin hydrolase is the enzyme tasked with breaking it down. Mammals (that's us, little tit-suckers that we are) do not generally produce this enzyme much after they are weaned.


And by weaned I don't mean having your mind blown by a 20 minute solo for "Can't Put My Finger On It" while on a fist full of 'shrooms (that's Ween, dummy). I mean that you have stopped relying on your mother to feed you via her teats, udders, milk-bags, etc. In fact, it's easy to wean most mammals because when you stop producing lactase-phlorizin hydrolase (LPH), your body stops being able to digest lactose, and that leads to vomiting and diarrhea.


Which is not good eats.


But, there are mutants in the human population who can gleefully drink milk as matured adults, roughly 20% of people, and they come from Northern Africa, Central Asia and Europe. Which is where Ireland is.


That said, if you wish to replace the cream and butter and cheese in the recipe with lactose-free analogs, I recommend kefir in place of cream, or soft tofu if you want to keep it vegan, and olive oil for butter. The cheese is optional anyway, and there's no replacement for a good cheddar (sorry, vegans, there just isn't).


"Kale" Colcannon:
The recipe generally specifies that you boil the potatoes, same as any other mashed potato preparation. While that may be good enough for the Guy Fieri crowd, I like the flavor imparted by baking instead of boiling potatoes. If you can, wrap them in foil and toss them in embers next time you grill something.


Rub your spuds in oil and salt and dock to let out steam. Roast them at 350 degrees F for about an hour and 15 minutes in a Dutch oven, until fork tender.


Halve and run the spuds through a ricer or food mill into a mixing bowl, and cover. I like to save the skins and fry them up for breakfast.


Melt half your butter in a large saucier over high heat. When the first bit of foam appears, introduce the shallots and leeks and cook down over medium heat until all are translucent. Add the kale and cook down for about 5-6 minutes. Add the cream, salt, and pepper, and bring to a simmer.


Mix this with the potatoes and adjust seasoning. Garnish with raw kale, if you like. Also fun: garnish with kale in a casserole and brown under the broiler. 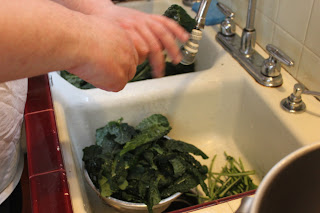 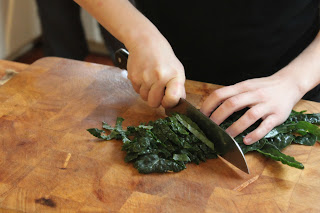 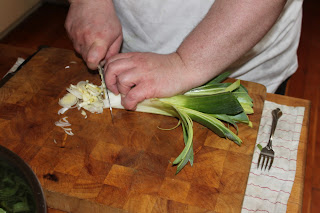 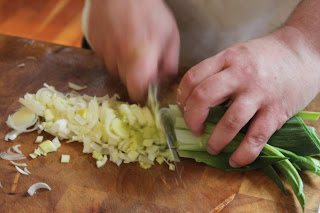 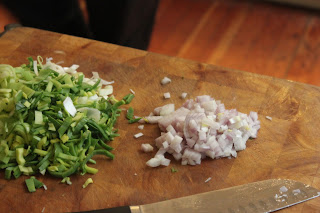 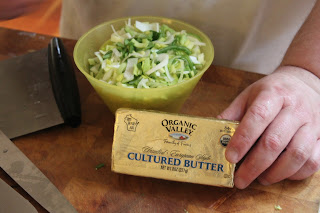 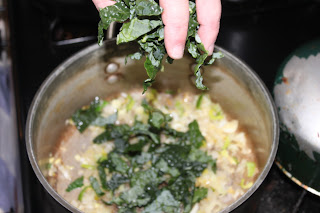 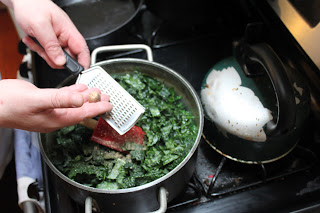 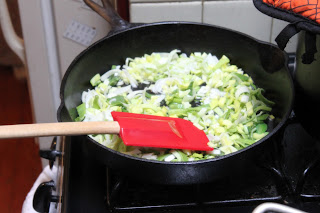 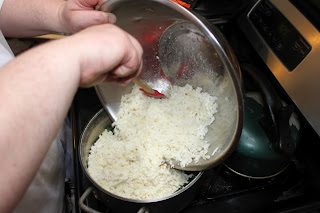