I did it. I finally bought a tagine. I still have a few jars of preserved lemons to use creatively so I figured why not go all out, right? It's a traditional Moroccan clay. It's simple and very pretty.

The way a tagine works is simple. Liquids evaporate from the food on the bottom and turn into steam. With the cone shaped lid in place the condensation drips back down into the food, keeping all of the flavors locked in. 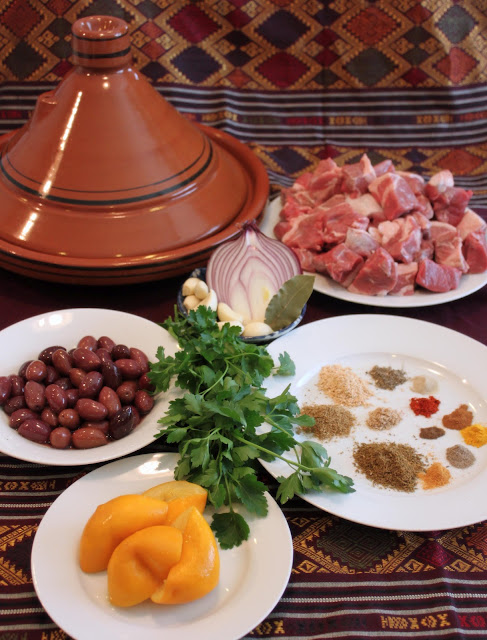 I've never actually used a tagine before now so I have my fingers crossed. I properly seasoned it last week which entailed submerging it in water for 6 hours and letting it dry in a 300°F oven for 2 hours, turning the oven off and letting it rest until cool and then coating the inside with olive oil. This prevents cracking.

I'm pretty happy so far. As I type, it's bubbling away on my stove top and starting to smell really damn good! Let me tell you what is in there: 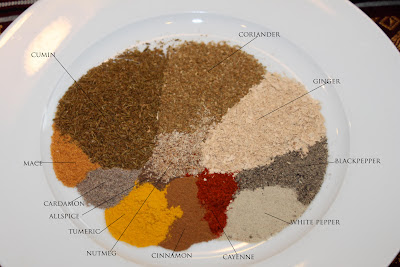 Cube your boneless lamb leg (mine was about 3 pounds) into 2 inch chunks. Then rub the spice mixture and one diced preserved lemon and 1/4 cup of olive oil into it.

Cover the bottom of the tagine with 1/3 cup quality olive oil. Distribute the cubed lamb evenly over the bottom, putting any really fatty sides facing down.

Top it with slices of red onion, garlic, bay leaf and fresh parsley sprigs. Add a cup of room temperature  water -we wouldn't want the tagine to crack! 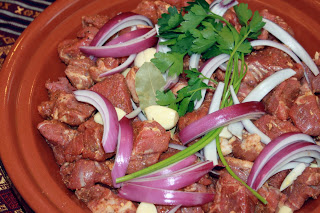 Put on the cone-shaped lid and set your tagine to rest on a heat diffuser over med-low heat on the stove top for 2 hours. After 2 hours, give it a peek to make sure there is enough water, ( I added 1/2 cup more).

Continue to let it cook for another 1½ hour.  Then add the rest of the chopped preserved lemon and pitted olives. Continue to cook for the last ½ hour taking the total cooking time to 4 hours.

Before serving, scatter the rest of the sliced red onion chopped parsley over the top. 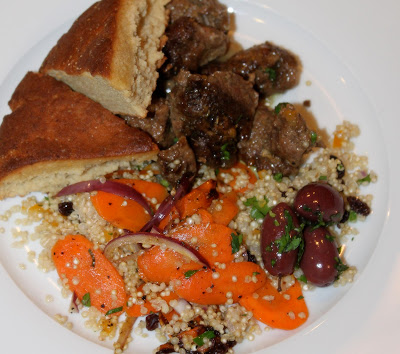 [Editor's Note: Christopher Kimball and the folks at Cook's Illustrated have done testing that shows that a Dutch oven will do the same task as well, but if you can afford one and have the space for it a tagine is pretty cool.]
Email Post
Labels: coriander cous cous cumin ginger Lamb Tagine onions paprika preserved lemon spices Tagine