"Oakland? Who Knew?" The Breakroom Cafe

Presenting the first in our series "Oakland? Who Knew?". Each installment will spotlight an example of The Other City By the Bay's vibrant, yet under publicized, restaurant scene. Good eats? In Oakland? Who knew? You will, now.


99% BitterSweet kicks it off with a vegetarian/vegan cafe that even a carnivore can love.


A vegan cafe? In downtown Oakland? On the skirts of china town? Yes! It does exist and has existed for five years now. Honestly, it's pretty dang amazing, even by my own carnivorous-heathen standards. 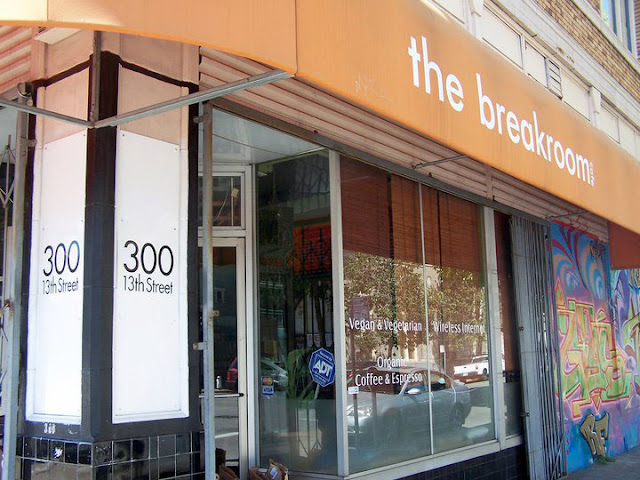 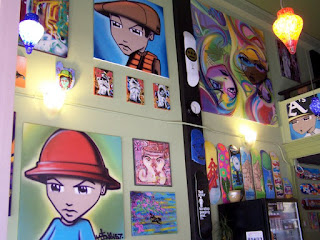 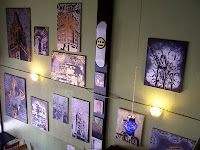 When you walk into The Breakroom Cafe, you can immediately tell the owners pour their souls in to this place.

From the choice of paint on the walls, to the well tended plants, the hand painted menu board, the works of local urban artists featured on the walls, and the huge mural they regularly have updated on the side of the building, it's part gallery/part cafe, and not one detail goes overlooked…and then of course, there is the food!

Lunch, this is what they do. Serving well thought out, creative, vegan sandwiches on fresh bread from Metropolis Bakery is how they do it.

Among my favorites are the vegan Meatball Sub. That sandwich won PETA's Best Vegan Meatball Competition. It is served on a panini roll and is covered in marinara sauce with melted vegan mozzarella cheese. Oh, it's good! The Spicy Sloppy Joe is no joke either. It's served with a side of house made corn bread.. all vegan, but you'd never know it. The Club! Ooh, The Club! A triple decker on marble rye with vegan turkey, ham and HOUSE MADE VEGAN BACON (WHAT?!?!).  I love that sandwich. It hits the spot every time. 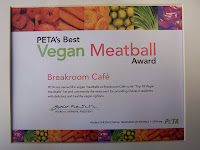 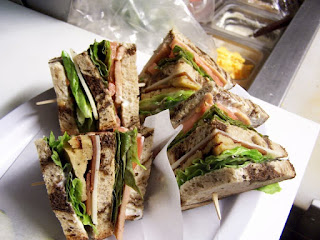 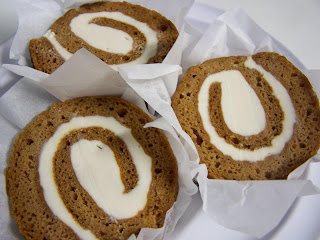 Let's not forget about the coffee and espresso from De La Paz roasting company. It holds nothing back. It's in-yer-face strong but still really well balanced. Thanks to The Breakroom's talented baristas, I have never had a bad drink there.

Even if you're just stopping by for a little something, you'll definitely want to look in the pastry case. Beautiful cupcakes, pumpkin rolls and other sweet vegan delights will be looking back up at you begging to be in your belly!


The Breakroom and every aspect of it is a labor of love and it shows. Oakland is lucky to have such a gem like this sparkling on the corner of 13th and Harrison.  If you're in the neighborhood, go check them out, I highly recommend that you do!