Aside from some train puns and hobo terms finding their way onto the cocktail menu, the railway theme is played down at Southern Pacific's 620 Treat Street brewery and pub.

A converted warehouse and machine shop with corrugated tin walls and plenty of skylights, the brew-pub is an open, airy environment (and gets enough light to support a number of trees growing indoors). The space certainly has room for lots of rail related kitsch but they thankfully chose a more austere approach to decor. As is, however, it's a lovely space to gather with a large group.

The interior features a bar, high picnic tables with bar stools, trees (really!), an upstairs dining room and a fenced in patio with actual picnic tables and plenty of bike parking.

Our group trickled in, sitting at the bar, right about 12:30/1pm on a recent Sunday. As soon as the sun started coming down on us through the skylights like we were sitting under God's Own Magnifying Glass we moved to tables. 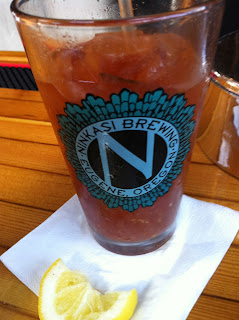 The first order of business for me was a Bloody Mary. I wanted a Bellini because it was a hot day but I got derided by my companions for being a wuss.

I don't know that they would have been able to make a Bellini for me, but as hot as it gets at that bar, I suggest they get on it.

The Bloody Mary was as good as any I've had in the city, expertly spiced up by our helpful bartender Nate. The drink is garnished with house made pickles. San Francisco prides itself with elaborate bloody mary garnishes, and having house made garnish certainly gilded the lily.

We were given lunch menus at the bar, with a beer and cocktail list on the obverse. The lunch menu features dressed up ham and cheese and smoked pastrami sandwiches, a variety of burgers, empanadas, "little gems" salads, house made pickles and fried Brussels sprouts.

On tap there are 7 different beers made in-house: a wit beer, California blonde, Belgian blonde, Helles Lager, a pale ale, an IPA and their Black Lager. There are also several other local beers available on tap, labelled as "guest beers".

The verdict: of the beers, my favorites were the Black Lager by a wide margin followed by the Helles and and the Wit. 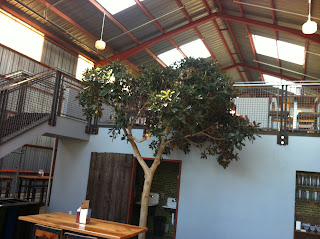 The Black Lager was much lighter than an ale or stout, which hopefully is what the brew-master was aiming for.

A few of my friends felt that it was too light, but I don't like to be beat over the head with "stoutness" of black beers.

The black lager was served at just the right temperature, just warm enough to let the flavors shine through.

The black lager had notes of raisins, honey and hops.

The Wit Bier, typical of the style, had hints of citrus and the Helles, a dark hued amber that has a splash of that Pilsner funk.

The rest of the beers in the flight were well executed but unexceptional. The India Pale Ale, a beer that seems to be a rote beverage of which every west coast brewery must have some version, was competent at best.

Of course, no one wants to be called merely competent so hopefully the brewers have plans for some seasonal specials (San Francisco is ripe for a Maibock revolution, y'all) and for some aged stuff (an oak aged barley wine would be nice, also a Flemish style red ale - which takes as much as 6 months to age). 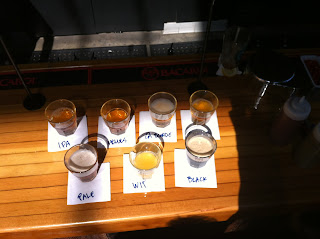 I was disappointed with the Brussels sprouts which had been fried whole with bacon and left behind a pool of grease. I would have flash fried halves or quartered Brussels sprouts or simply roasted them in the oven and added an acidic element (I used the limes that came with my empanadas to brighten up my sprouts). I would have done the bacon that accompanied the sprouts in large lardons. But the chef's heart is in the right place - the bacon place.

As for the empanadas, I thought these were executed well. Filled with savory Argentinian beef, almond and chopped green olives with an aioli on the side (this accoutrement I could have lived without), the empanadas were flakey and soft, and also topped with a salsa verde (why not that on the side instead of the heavy aioli?).

My friends had a variety of lunch items that all looked pretty good: burgers with blue cheese, ham and cheese sandwiches, salads and herbed, garlicky French fries ($1 extra than the normal fries) - thinly cut and crispy.

Will I go back? You bet. I hope the coming months see the menu tighten up, and I have yet to try the dinner menu (watch this space, though). 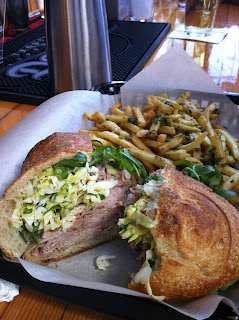 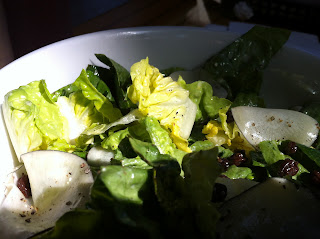 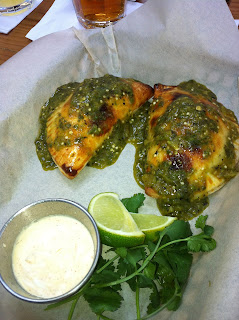