This Spud's For You: Proper Homefries 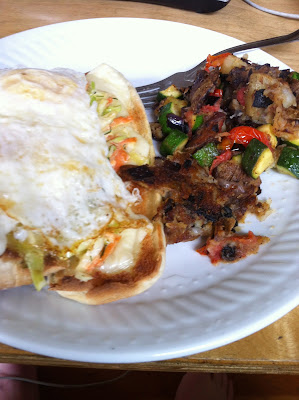 Found a potato that was a day or so away from going green and felt, by gum, I had better cook that sumbitch.

Homefries are of course best made on a commercial flat-top griddle, just like hamburgers (I defy anyone to argue with me on this), which I don't have at home.

The next best thing naturally is a cast-iron pan. Mine is a #9 with a lid, holds about 5 quarts of fluid and has a cast-iron handle that allows you to pick it up and toss whatever is inside - if you have the arm strength.

So, for me it's usually a two handed job.

A home fry doesn't need the be potato based, but you do need some starchy tuber. I've done them with yams, sweet potatoes, or even any starchy root vegetable I guess. But today, it's the potato.

What else you put in there is pretty much up to you, but here's how I like to do it and in this order:

Fry up some bacon. Set it aside and drain most of the fat. Toss in raw, cubed, skin-on potatoes and some diced onions. Turn the heat down, cover, and find something else to do for at least 15 minutes, because we are going to first steam, then fry them suckers.


Basically, depending on how hung over you are or aren't, who you are feeding (and how many of them there are) and what you have in the fridge, you can put whatever you feel like in homefries.

I went with zucchini and halved cherry tomatoes, pictured above.

Remove the lid of your cast iron and give everything a good shake. Make sure that the heating surface is evenly covered. Salt and pepper. Turn the heat up high. Walk away again, because if you haven't made coffee yet, well, why haven't you? Are you a tea drinking commie? Don't like America?

Keep your ears peeled because eventually you will hear the familiar high-pitched sizzle of frying.. at this point, either give everything a flip with a broad spatula or toss the whole works.

Wait another few minutes then add your accoutrement.

Shake the pan to let your newly introduced items get contact with the cast-iron, pepper again, add a pinch of salt and let that fry for another few minutes.

The whole shebang? Maybe 45 minutes to an hour of cooking.

What's that? You don't have time for all the noise? You can cheat a couple ways:
That will cut down the time you need to steam the potatoes.

Of course, you can also do the steaming and frying the night before and toss everything together in the morning for a quick breakfast.