"We're doing this just for this week to see how it does, then hopefully make it a regular thing on the bar menu," says Nathan Sheeran, assistant GM of SOMA's Twenty-Five Lusk. 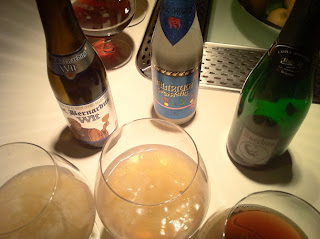 We at Chowbacca! certainly do hope that the beer pairings menu becomes a regular feature at Twenty-Five Lusk.

Sheeran and Executive Chef Matthew Dolan developed a menu featuring three traditional Belgian beers with complimentary and contrasting "bites". At $28, this is a steal - the most expensive pour, an aged Belgian sour-ale, is typically $8-12 for a 6 ounce pour on most bar menus. 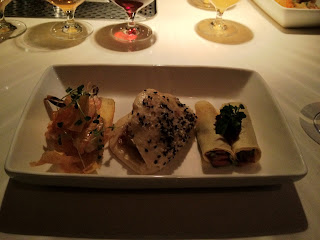 In the spirit of transparency and full-disclosure, I have known Sheeran for 32 of his 34 years, and had he done a lousy job - I would have let him down easy.

But Sheeran's bona fides are indeed impressive, and he would certainly be my pick to attempt this type of pairing.

An alumni of Cleveland Height's La Cave du Vin (one of the top 25 beer bars in the world, according to ratebeer.com - and honored with similar accolades by several other industry associations), Sheeran is among  an élite group within the service industry that has a level of expertise in beer that parallels a master sommelier's knowledge of wine. 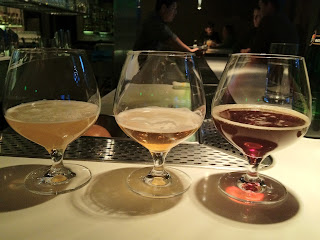 And Twenty-Five Lusk's bar selection reflects this passion for beer. However, even in the age of the gastro-pub, beer is still given short shrift in fine dining. Hopefully, this is changing.

And, at the risk of sounding like a smart Alec (Guinness not Baldwin, obviously), it's about fricken time that San Francisco catch up with the East Coast and Midwest on beer - there is life beyond India Pale Ale, California...take my hand and come along on a magical journey of delicious beer.

Note: Nathan made me promise not to post this on the web but it's just too precious not too. Welcome to 25 minutes into the future, bud.

I thought Chef Dolan and Sheeran really knocked this out of the park.

Starting with the shrimp - as you can see it's still a touch translucent, just perfectly cooked to medium. The  highlights of the St. Bernardus Wit bier did match nicely to the elements of the dish: the citrus and tartness of the candied kumquat, the sweetness of shrimp, a light herbal note throughout. The beer finished like a fizzy tea: herbal, umami. 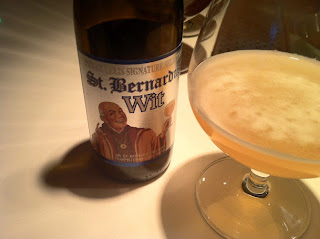 Next up, steamed bun with pork belly, pickled radishes and sunchokes. Normally, pairing a sunchoke with wine is a daunting task, however the team at Twenty-Five Lusk is making a broad stoke here in contrasts. The bun is salty, almost too salty, but as soon as Delirium Tremens hits the palette, the salinity is instantly quenched, and the fatty pork is cleaned away leaving you ready for the next bite. Personally, this was my favorite of the three bites, perhaps because of my abiding love of salt and my long, long love affair with Delirium Tremens. 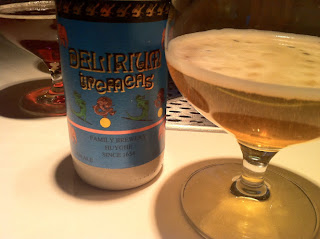 The inaccessibility of some Flemish sour ales like the Bacchus* lays in their murky depths, and I understand that sour ales are not for everyone, but I love them and their "culinary clown car" (to borrow a phrase) of flavors: smoke, barnyard, hay, flowers, cherries, apples, caramel, aged gouda, raspberries and funk. A great sour ale is a study in self-contained contradictions. The accompanying smoked duck and cheese crepe with fig mirrors much of what is going on in the ale: just enough but not too much smoke, not too much grease, the duck at room temperature, dry, goat-y notes of cheese, tart fig in a paper thin crepe. Dee-licious. 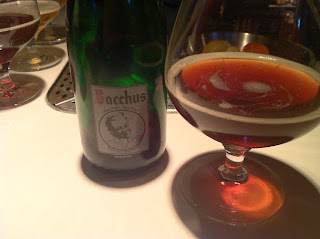 So, well done Nathan, and well done Chef Dolan. Let's do this again, and often! 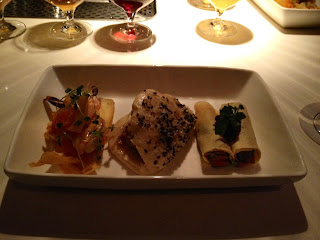 The Belgian beer pairing menu will be available in the bar and lounge areas of Twenty-Five Lusk every night until March 31st. No reservations are needed. Enjoy.