When I first got my hands on Harold McGee's "On Food and Cooking: The Science and Lore of the Kitchen", the first chapter I read all the way through was the one on bread making.


It's because the book lacked a chapter about how to forage for or cultivate magic mushrooms.


One of the most fascinating things about food science is the nitty-gritty details about what happens, chemically, during commonplace kitchen occurrences.


For instance, most people when asked would say that when bread stales it's because of a loss of moisture. That is in part true, but it's not because of loss of water that bread becomes stale - it is the re-crystallization of starches and proteins over time that squeeze moisture out of the bread.


And staling begins the moment bread is taken out of the oven: in fact, it's key to making good bread.


I had always loved ciabatta bread since I was introduced to it as a child: the crunchy, hard crust and a chewy crumb with large, open bubbles. Nothing would give me more joy that to toast a slice of ciabatta and watch butter melt into the crevices.


But, how does this happen? What makes those big, open bubbles? What makes the crust so crunchy, so different than all the other breads I was used to growing up: loaves in the Swedish and German style...uniform sliced commercial breads...Jewish ryes and Ukrainian black breads...bagels and bialys?


The answer, it seems, is water, chemistry, and time.


Gluten is not a single protein, but a network of gliadin and glutelin proteins stitched together when dissolved in water (with a small amount of alcohol excreted by yeast respiration). The molecules can be stretched out (when relaxed) but also exhibit the properties of any elastic substance that can reform to its original shape.


The most difficult part of dealing with dough is managing it's elasticity. Consider silly putty.


When force is applied to an elastic material, it tends to maintain it's form. Anyone who has tried to make pizza at home is familiar with dough shrinking back to (almost) it's original form unless you let the dough "relax".


I could write pages and pages of boring scientific detail as to why this happens, but rather I'll use the silly putty example, in the extreme, to show the phenomena in real life:


In this example, the kinetic force of hitting the ground aligns the proteins in the putty as crystals, which shatter upon impact.


In theory, you could chuck a (heavy enough) ball of dough from a (high enough) height and get a similar result. Don't try this at home.


Force applied to this kind of material, an elastic putty, will tend to make the molecules try to maintain their shape. So, in order to shape and stretch dough, it must be slowly coaxed.


Coaxed gently, the proteins can slowly stretch to impressive dimensions. Here's a common example we're all familiar with:

Like the video, gas - as a byproduct of the natural respiration process of yeast microbes - is produced and the net of proteins, like the balloon, trap the gas - while expanding elastically.


The most common way to produce "gluten" is to knead a bread dough. The agitation will knit the two main proteins together, and while the dough "relaxes" after the initial kneading the yeast in the dough begins to consume the sugars in the flour, producing alcohol and carbon dioxide. The carbon dioxide released by the yeast forms pockets of gas within bubbles of dough.


But there is another way to produce gluten that does not require kneading.


Gluten will also form over time as starches and proteins become dissolved in water, as minute amounts of alcohol are introduced into the solution dissolving more proteins. The protein molecules grab on to one another like a conga line, the phosphoric ends bonding to the lipid ends, in a natural chain.


For those of you who didn't spend high school running an illegal BBS (guilty) or getting high (guilty), you'll remember the term "polymer" or even "polymerase chain".


In other words: gluten.

We really have one hard and fast rule at Chowbacca!: writing drunk is fine, just don't publish when you are drunk.


I recently took a trip to Lucca Ravioli Company in San Francisco's Mission District, and I bought a bottle of Prosecco ($12, cheap!) and some double-aught ("00") flour.


What I didn't share was that I would be using the left over yeast at the bottom of the bottle of the Processo to start my "no knead" ciabatta, instead of using commercial instant yeast.


This does take a little longer for the bread to ferment, but it's worth it. A slower dough fermentation means a more flavorful dough, especially when the neighborhood yeast (in the air) can compete with the pitched yeast (from the bottle of Prosecco).


So, it is for you, dear reader, that I must suffer through drinking an entire bottle of sparkling wine. Oh, how I suffer for my art.


That's it for science, for now. Or is it? Because we haven't talked about the gelatinization of starches and proteins when exposed to heat and...most importantly...water.


The recipe, from the Old Grey Lady, for no-knead bread:

Mix the flour, water, salt and yeast in a nice, big stainless steel mixing bowl (or better yet, a ceramic bowl). Do not knead. It's called "no-knead" bread for a reason.


Cover with plastic wrap and leave it out, at room temperature, for at least 12 hours, or better still, 18 hours. You will see bubbles form on the surface. Lift the plastic wrap and you should smell a sour, boozy smell. Now you are ready to shape the dough into loaves.


Speaking of suffering, it is easily 70ºF outside, and because of my blacktop roof and the shape of my apartment, that means its 80ºF inside. But it's about to be hotter, because while I proof my dough, I'm preheating my oven to 500ºF. Yes, 500.


I've put my bakers stone on the top rack. Don't have one? You can buy ceramic tiles from the hardware store and save yourself some money. You should also have: 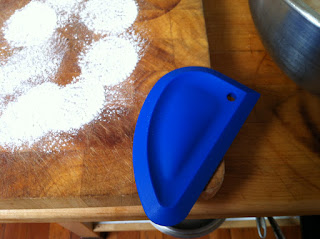 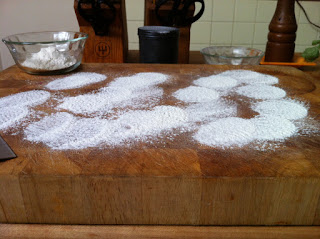 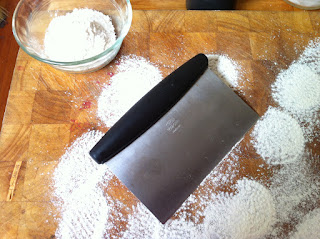 Using your dough scraper, fold the dough in on itself, adding flour as you go, as much as 1/3 of a cup, depending on the humidity, etc.


After you fold over with the scraper once or twice, use both hands to pick up and edge of the dough, stretch it, and fold it over.


Be careful to preserve as many large bubbles as possible.


Fold over only a few times, then transfer to a floured sheet of parchment paper, set on top of a cookie sheet turned upside-down so you can remove the paper easily with a pizza peel.

Form, gently, into the shape of a large slipper. 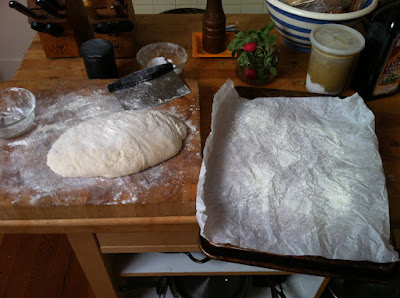 Allow to rest for at least 30 minutes to an hour and then transfer to the oven and reduce heat to 375ºF.


An internal temperature of 220ºF is desired before the bread is ready to be removed. When tapped the bread should sound hollow. 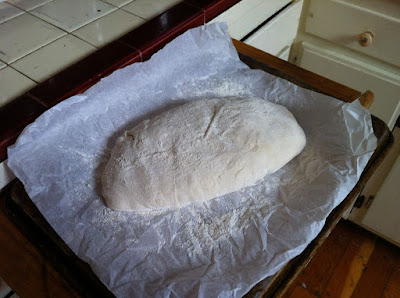 
Put that knife down.


Knives are for closers.


You are almost, almost there, but there is one very important step that has to happen before you can enjoy your bread. 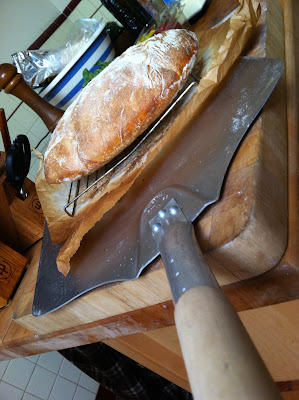 Ponder this while you wait: at boiling temperature, both the proteins and starches of your loaf of bread are gelatinized. As they cool, crystals form hardening the structure of the crust and crumb of the bread.


Suppose you cut into your bread before its "skeleton" - network of crystalized starch and protein bubbles - solidifies?


Just like you wouldn't cut into a steak right after it comes off the grill, you don't cut bread right out of the oven. The opening will let out all of the steam, and you will end up with bread so hard that even your bread knife can't penetrate it.


So, wait. Wait at least an hour. If you have a rack of any kind use that to allow airflow both over and under the bread so that it cools efficiently. It also helps to prevent trapping moisture under the bread.


The crust,  the outer layer of the bread, will stale first, trapping just enough moisture inside to leave the crumb, the inner part, chewy. Time will allow the heat to evenly disperse the moisture within the crumb.


Like I said before, staling is the key to making great bread. Don't cheat, wait. I know how good it smells...go for a walk.