Pozole is one of those secret things you get let in on if you are lucky.


Almost everyone has at least heard of (small M) menudo: a staple Mexican stew of peppers, tomatoes and tripe. Or at least Menudo (the band).


For most people, the prospect of eating tripe means "stop, do not pass go."


Sadly, for the unadventurous eater, many of the finer points of Mexican cuisine are missed if your attitude is going to be to turn your nose up to the traditional.


But for those of us whose knowledge of Mexican cuisine extend beyond Taco Bell (or the Mission hipster version of Taco Bell, which is the shamefully gringo Beef Super Burrito - a Chicago hot-dog style culinary clown car of burrito no-nos, essentially Taco Bell Nachos Supreme toppings wrapped up in a tortilla), dishes like pozole and menudo are fulfilling as nourishment and comforting to "the soul".


There is a time and a place for cheese and sour cream. In your burrito is not the place, in my vaunted opinion.


But whatever, order what you like, the fine folks at Pancho Villa will put whatever dumb crap you want in your green spinach tortilla wrapped hipster burrito, Jefe.


I eschewed all that long ago - I like my burritos simple: lengua or carnitas with rice and black beans, salsa picante or salsa molcajete, extra white onions (cebollitas) and cilantro.


For a quick snack, tacos cabeza (head cheese), again with plenty of onions and cilantro.


And on Sundays? On Sundays most of the taquerias in the city will make either menudo or pozole or both special for that day.


There are as many different versions of this on the web as there are recipes for chicken soup on the web, it seems, but I decided to make something similar to the coastal Jalisco style of pozole you find most often on the West Coast: with added dried Ancho and chipotle peppers. Mine adds fresh peppers and garlic.


Burrito snobbery aside, I have taken many, many liberties with my interpretation of pozole. The main one: using beef tongue instead of roast pork. Here's the traditional pork version, notes for making with beef tongue follow.

I have a stone molcajete, a small one, made from coarse volcanic rock. Unlike ceramic mortar and pestles, the coarse, uneven surface of both the molcajete bowl and it's pestle really make a difference when grinding whole spices.

Grind your salt, pepper, 1 tablespoon allspice, 2 tablespoons cumin, 1 tablespoon epazoté and 2 tablespoons Mexican oregano in a molcajete with 1/2 of the garlic and 1/3rd of the onion. Pour in olive oil to thin this to a paste that can be smeared on your pork.

If you can let your pork absorb this rub overnight, even better.

Sear the pork in a large cast iron skillet (like my Lodge #9) over medium high heat and transfer the meat to a large stock pot.

Deglaze your cast-iron with onion, garlic and lime juice (and perhaps some water). Pour over the pork. Cover with water or stock. Add bay leaves, boil, cover, reduce, and simmer for 4-5 hours.

Roast the dried chiles with the remaining spices in cast iron, whole until little wisps of smoke appear. Set aside.

Sautee remaining garlic and fresh peppers in the cast iron over medium heat until softened.

Carefully remove the pork from the stockpot and place in the cast iron. Allow to cool enough until you can remove the bone and gristle. Using a fork, shred the pork.

Soak dried chiles and spices in the hot braising liquid for 15-20 minutes and then blend with a stick blender.

Add pork and peppers and drained hominy. Simmer for about an hour until hominy is al-dente. The hominy will become softer overnight.

This is a soup I recommend making on Saturday to serve on Sunday.


It had been raining for days, and I was cooped up if I wasn't making the trek to the south bay for work.


I was hopelessly penniless.


Finally, the sun broke out and I got paid: I vowed that I would use the nice weather to bike out to the Dog Patch in San Francisco and visit Olivier's Butchery on 22nd and Illinois.


I had been craving pozole for days...nay, weeks, and I thought it would be fun to make it with bits and scraps or, even more fun, beef tongue.


It was a Sunday. I rolled out of the garage and toward the Bay.


Olivier's opened a little over a year ago and is a full-service French butchery.


Olivier is, as you may have imagined, French. He and his wife, who is Vietnamese, own the store and the two of them are usually on premises. His wife, who speaks English, French and of course Vietnamese fluently often helps translate for Olivier, whose English speaking skills are a work-in-progress.


Traditional cuts can be found: Côte, entrecôte, onglet, hand made sausages - including a powerful lamb merguez, whole and parted chickens, pork; also some more hard to find items - duck, quail, sow's ears, pig trotters, liver, kidney and spleen of beef, pork, lamb and whatever other critters are on sale.


When I first visited, often only Olivier, his wife, and an assistant would be manning the store. They seem to be doing a brisk enough business now to have hired some additional assistants, (typically young, probably culinary school types), all dressed in crisp Burgundy colored chef coats.


After gazing at the display case for a couple of minutes, a helpful young woman came up to me and asked if I needed help finding anything. I showed her the 3.5 lbs tongue I had in hand, sous vide.


I made chit-chat about what I was cooking, what I would like to buy if I had more money (the aged côte du boeuf), how the store is doing, etc.


She suggested that I braise the tongue for a number of hours - I said I planned on doing just that, in a braise with traditional Mexican spices (the epazoté, the oregano, chipotle powder, bay leaves, allspice).


After which, you have to carefully remove the tough outer skin of the tongue with a sharp knife.


Compared to pozole made with pork shoulder, (or traditionally, tête a porc), this is more effort.


But the results were wonderful, soft nuggets of beefy tongue after braising, peeling, chopping and simmering for an additional 2 or more hours. 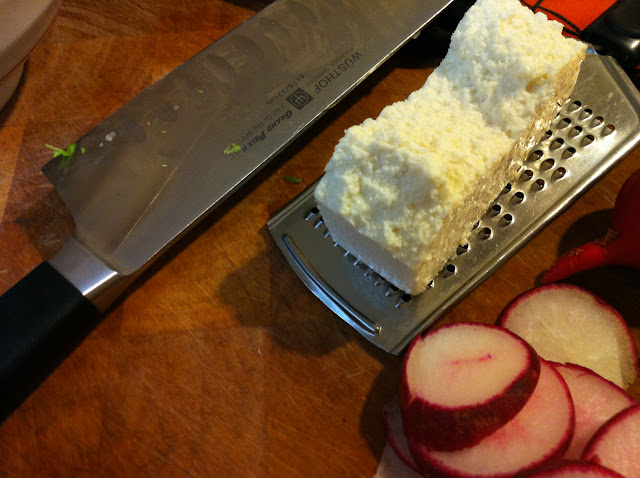 Pozole, like a great many traditional Mexican dishes (especially street food), is as much about the preparation itself as it is about the condiments.


Here are some suggestions:

The sky is really the limit, especially with soups. So, while I wouldn't want sour cream or guacamole in my burrito (and really, it's up to you...do what you like, it's a free California), a dab of either on my Sunday pozole is, as Martha would say, "a good thing."