Jill Vedaa has worked as a chef in Cleveland for a long time, but when I first met her she was tending bar at the gone-but-not-forgotten Code Blue bar in downtown Cleveland.

Also, she was naked.

Well, not quite. Me and my pal and coworker Bryan walked into the bar for the first time one afternoon, eschewing the normal Euclid Avenue office-dweeb happy hour.

On the walls were artsy nude black and white photos of a lithe blonde with short, spiky frosted hair and pixie-like facial features.

When we sat down for a drink, the very same young woman came out from the stock room, all smiles, and asked what we'd be having.

Jill was also working as the sous chef at the Flying Fig under chef/owner Karen Small at the time, and has gone on to amass an impressive curriculum vitae.

Prior to the Fig, Jill worked under some guy named Michael Symon at Lola. Wonder what ever happened with him? 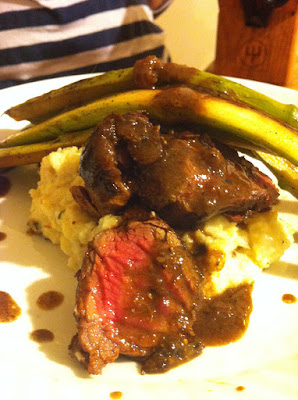 Jill was kind enough to share her recipes with me, particularly her steak sauce. I had a version of the following for my birthday dinner last month at Rockefeller's Restaurant in Cleveland Heights, Ohio, where Jill is the executive chef.

Pull your steaks out of the refrigerator at least an hour before you plan to cook them.

The hanger steak is 1/2 of the muscle that connects the animal's diaphragm to its flank and skirt. There is a large tendon that runs through the middle of the muscle. After trimming the tendon there are two steaks per animal.

Like the skirt, flank and tri-tip, the hanger is both flavorful and can take aggressive seasoning, but for the purposes of this recipe a mix of salt, pepper and, optionally, coriander will suffice, applied after the meat is pulled from the chill chest.

As butchered, most hanger steaks have roughly three sides. I like to fry them up in a smoking hot cast-iron, about 5 minutes on the first side and 2-3 on each additional side in about a tablespoon of bacon grease for the doneness pictured here.

Let rest for at least 5 minutes before slicing, against the bias, and serving. Be careful to intersect the grain of the muscle or, like a flank steak, you'll turn an expensive cut of meat into shoe leather.

I served these with sauce (below), charred asparagus tossed in green tea vinegar (Lev's) and the smashed potatoes, roasted cauliflower with blue cheese (below).

Bring to a low simmer, simmer for 20-30 minutes, add water if needed, blend.

Reheat and monte au beurre with steak (add water, deglaze pan with sauce, reduce slightly, remove from heat, add a pat of cold butter and mix the butter in).

Use as a marinade base (maybe add fresh herbs or raw garlic for skirt steak, flank, tri-tip or hanger).

[ Editor's note: I was out of ketchup - for shame! - so I did this instead.. similar flavors]

Deglaze your steak pan fond ("..le fond du cuisine..") with water and vinegar. The acidity of vinegar will dissolve the brown bits from the pan. I use a thick silicate spatula to work these bits up from the bottom of the pan.

Add remaining ingredients except the butter and stir, reducing by 2/3rd volume. Add peppercorn. Taste and adjust salt if needed.

Remove from heat and monte au beurre (add the butter and mix it in with spatula as it melts).

Rub potatoes in olive oil and salt and wrap in tin foil.

Quarter the cauliflower and rub with oil and salt. Arrange on a cookie sheet, with the wrapped potatoes.

Cook for one hour, turn potatoes and cauliflower, and cook at 350ºF for another 25-30 minutes until cauliflower is browned and fork tender.

Remove into a metal bowl and cover with plastic wrap and let cool, about an hour.

Add cauliflower, black pepper, salt and cream to a saucier. Bring to a slow simmer and blend with a stick blender.

Using your hands, smash the potatoes into medium sized chunks. Add to saucier and cover, on low heat, for 10 minutes. If you want to optionally add garlic or herbs, do so now.

Remove from heat, add cheese, fold over with a rubber spatula and cover until ready to serve. Reheat individual portions in a 350ºF oven for about 15 minutes if cold.