I finally snapped several years ago. I had heard enough jokes about my home town of Cleveland, Ohio from my roommate, herself smugly "born and raised" in San Francisco. It's easy to be proud of growing up in a city as diverse, beautiful and welcoming as San Francisco, to revel in its quirks, its history and romance.

But Cleveland is a hard city to love, although deep in our hearts (almost) all of us who hail from her do.

I proceeded to lecture my roommate on Cleveland history, falling on probably deaf ears (or considering the time of night, vodka soaked). Her opinion on Cleveland has softened...we have taken over her social life and her Facebook page so much that she dared utter these words: "I might as well be an honorary Clevelander now!"

Uh, no. Not until you've scraped ice off your windshield or been attacked by mosquitoes in October, rode the back on an Amish hay cart in Autumn, cheered for the Indians during a snow storm in May at Jacobs Field or felt rage that the Rock and Roll Hall Of Fame Induction Ceremony was held (until this year) in New York City. New York City?

Clevelanders have always had a love-hate relationship with New York City: for it was there, in 1884, that John D Rockefeller uprooted his Standard Oil Company from Cleveland and took it and his largess to New York, New York.

Still, Rockefeller remained fond of Cleveland and dedicated many buildings and parks all the way until his death (and beyond in endowments and trusts).

In 1930, the Heights Rockefeller Building was built to be a general (read: company) store and centerpiece of the Forest Hill community in Cleveland Heights. Home of the Cleveland Trust Company, built in the French Norman style, this handsome building features high ceilings, marble and granite, and one of the oldest continuously operating elevators in the country.

The huge walk-in safe of the Cleveland Trust has been converted into a small but very functional kitchen in which Executive Chef Jill Vedaa creates accessible New American cuisine. The simplicity of her food ("don't fuss with it too much", Vedaa) is austere in contrast to the ornate decor of the space, complete with a stained glass window overlooking the dining room.

I arrived early to Rockefeller's Restaurant and was greeted by a doe-eyed blonde named Joy who bore a striking resemblance to Chloe Sevigny.

I opted to sit at the bar since none of my companions had arrived.

Having had a late night of birthday carousing the night before, I set out to fix my hangover with a stiff negroni. I idly browsed the wine list as I waited, knowing that I would probably defer to my pal and fellow wine enthusiast, Christina.

The space is huge and imposing. I envision John D himself clearing the whole room and roasting a hot dog or marshmallows on a stick over the fireplace, a stolen Citizen Kane moment of forbidden childhood glee safely out of sight of the proletariat.

The group trickles in slowly, foiled by the worst timed traffic lights in Cleveland, perhaps the world. We are shown to a round table on a raised platform overlooking the dining room by our hostess, Joy. 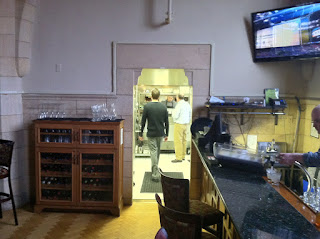 Another round of drinks. Christina gets a negroni - I knew I liked her for a reason. Her boyfriend Chris orders a frou-frou concoction tinted lavender by some twee cordial, as if to say: "yes, real men can drink purple martinis". Bravo!

Brad and I both get the daily special, something called "The Dillinger", which is basically a Bulleit Rye sidecar on the rocks (just say no to "up" drinks). Olga abstains.

After some hemming and hawing we get around to ordering appetizers.

The menu did not contain many vegan or vegetarian options, or did not at the time of our visit.

[ Editor's note: Jill sent us the updated menu which does have a few vegetarian options, including an entrée. I'll include that at the end of this article. ]

We had:
"Just to let you know, we're about to 86 the cowboy steak," said the Waiter.

"Oh word, Jill had best save me one of them bad boys or I'll have to share some stories of her from the 1990s," I jested.

The Waiter shot me a bitch, please kind of look and said, "90s? Hell, I'll tell you some some stories of Jill in the 80s."

Needless to say, by the time I got around to ordering the cowboy steak, which is a single, Frenched ribeye steak, it had been 86ed (the kitchen ran out of them), so I defaulted to my second choice, the hanger steak.

Jill Vedaa introduced this wonderful cut of meat to me back in 1998 when she was the sous chef at the Flying Fig in Ohio City.

The hanger steak is one of my favorite cuts of beef, a muscle that joins the flank and the skirt to the animal's diaphragm. There are two on each animal, weighing about a pound each, on either side of a large tendon.

Susceptible to spoilage, butchers would take them home rather than try to sell them - and as an added bonus it's one of the best cuts on the animal.

Rounding out the entrees:
My arm was twisted into having two excellently executed but not terribly daring desserts:
--

Probably my only real complaint was the lack of an espresso machine.

A+ for effort, indeed.

The price was right: my entree was $28 for a good portion of steak, and most entrees were in the $20-30 range. Appetizers ranged from $8 to $16. There were a number of priced-to-move items on the wine list.

Chef Vedaa's food is good and her approach to food is very accessible: pick the best products available, don't mess with them too much, and you'll have a good result. I can get behind that.

She's hard working and talented and she deserves success, but the restaurant industry is cruel and often arbitrary - I worry that the location may be out of the way for the kind of crowd they want to attract: young and spend-thrift.

Also, it may seem out of place to have such dressed-down food in such dressy environs.

I hope that the local community sees the irony of it as I do, the whimsy of roasting marshmallows over the fireplace in spite of the marble and vaulted ceilings; turning a bank vault into a kitchen.

And Jill...get an espresso machine. We can do better than Starbuck's!