Skip to main content
Labels
Posted by Dottore Gus May 19, 2012

This post is dedicated to the memory of my dear friend Keite. I'll think about you every time I pass through Belmont. Safe travels, little one.

I never understand people who choose to patronize Starbucks, at least in the presence of other options. I pass no less than two on my way to Caltrain in the morning: one at 16th and Rhode Island and the other at Division and Townsend, where the hoodied, Rainbow Brite haired shiny happy Zynglets mill around mid-morning (no one in my industry goes to work early if they can help it).

Starbucks is America's new McDonalds, and the coffee shop (Starbucks in particular) has overtaken the donut shop as the stereotypical hang out for cops (who, in their leisure time cultivate excess muscle instead of fat, and order their lattes skinny, non-fat and no-whip, and there's nothing to see here move along).

On any given morning, Townsend and Rhode Island (near I280 and US101) are lined with CHPD and SFPD motorcycles and squad cars. I've even ridden next to SF bicycle cops, with their cool $3000 Cannondales, no doubt en route to meet up at the 'Bucks.

That said coffee, coffee culture and coffee shops are in my blood -- hell, my blood is probably 1/3rd booze, 1/3rd coffee and 1/3rd actual blood. My body runs on magic and caffeine, but mostly caffeine.

And when I drink caffeine, I skip past the Starbucks and I buy local.

Lately (that's a double entendre, since I'm usually late for work, get it?), I've been adding a shot of espresso to my iced coffee when I stop at Tazza D'Amore inside the terminal for Caltrain's San Francisco 4th and Townsend station.

In honor of baseball season (where, allegedly, our team is supposed to actually win now and again, I'm looking at you Lincecum), Tazza D'Amore now has a special called "The 7th Inning Stretch", two, count 'em, two shots of espresso and iced coffee. Needless to say, this is my new morning drink.

Tazza D'Amore features the same locally made pastries you will find at most coffee shops (many baked by Il Fornaio), yogurt, fruit and pre-packaged sandwiches: turkey, ham, avocado, tofu or cream cheese on sprouted wheat bread with sprouts and veggies and vegan mayonnaise.

Turkey avocado: that's the one I get when I'm being health conscious.

Today, I was being "god I am hung over" conscious, so it was the breakfast special: microwaved Egg-Beaters, cheese and ham on a toasted "bagel".

"Bagel" is in quotes because no matter how much you believe it, the thing you people in the Bay Area call a bagel is not a bagel. And that's a subject for a whole other post.

Provided you are not in a rush, check out The Creamery caddy-cornered (yes, it's caddy-corner you West Coast charlatans, not "kitty cornered") from Tazza D'Amore on 4th and Townsend.

You can have a quick fruit and yogurt with your coffee, or order one of their brunch items - salads, crepes, egg sandwiches.

Behind The Creamery, and with further patio seating, is a Taqueria which I have never actually seen open (presumably they open for lunch). They, and The Creamery, share a tap system which serves local beer on tap.

Of course, I do not make morning drinking a habit, with some notable exceptions.

In the fall and winter of 2009-2010 there was an incident at my place of employment that forced us peons into a tortured schedule of round-the-clock, in-the-office coverage. Oftentimes I was asked to cover 8PM-4AM. There were a number of times, in emergency situations, when I had to take cabs all the way to Palo Alto (about $150, give or take).

But I prefer Caltrain.

The first train leaving California Avenue Station in Palo Alto just after 5AM pulls into SF 4th and Townsend right after 6AM.

At 6AM, you were swimming upstream to get to bed for a few hours before you would have to rise and grind again.

I am an international gentleman of leisure, and I enjoy a cocktail or three before bed, however the only bars open at 6AM in San Francisco are depressing dens of old drunks and tweaked-out coke-heads.

Luckily, one needed go no further than the Caltrain news stand at 4th and King for a couple of airplane sized bottles of Jameson Irish Whiskey and Canada Dry Ginger Ale (yes, that's how much I hate America).

They even have Fernet Branca in cute little glass bottles (suck on that, TSA).

And of course they have all the regular offerings of a news stand: soda, cigarettes, trashy pop-culture magazines, actual news papers, free maps and tour guides (I find these are good for lighting the grill).

Of course, if you are serious drinker, you will want to check out Safeway between 3rd and 4th on King. This is a must-stop shop for Giants fans on game day, or Sharks fans looking to drink on the train en route to the Downtown San Jose Caltrain stop, right next to HP Pavilion, the home of the San Jose Sharks.

And that, folks, is why taking the train is the most civilized manner of travel: multiple opportunities to drink before, during and after the ride.

Of course, one must not forget one's manners.

In fact, the gin-soaked gentleman sitting next to me on the Northbound return-trip back up the peninsula has made two faux-pas:

... keep your fucking feet off the seats.

Manners degrade in a couple of predictable circumstances and in predictable ways (game days and rush hour), so lets run down some rules to make everyone's commute a little nicer:
-- 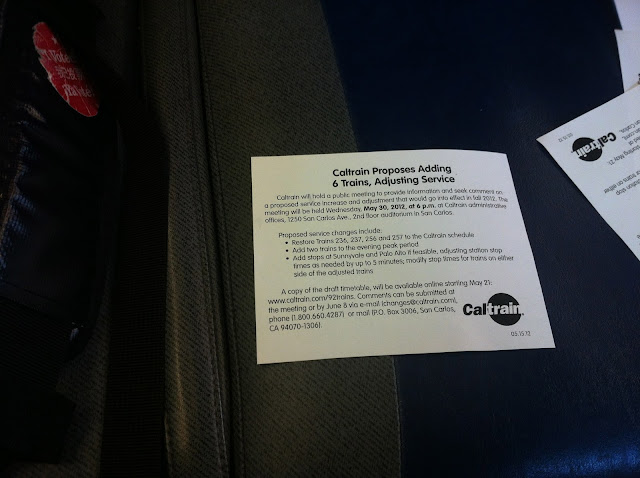 While we at Chowbacca! are unsure of what this will mean for commuters, we do know that the JPB Board of Directors are proposing adding new trains and routes, which would be a positive thing (especially for me, who can't get out of bed at 7:30 to catch any train before the 9:07 Southbound most days).

Stay tuned at www.caltrain.org, or follow their official news arm on Twitter: @caltrain_news. Also good to read: @caltraindiaries and @caltrain, which is operated by our friends at cow.org.