The Greatest Salad Ever 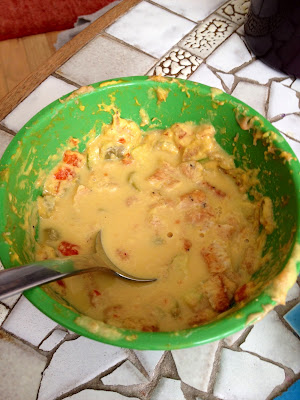 Tonight, just before dinner, my going-on-five-year-old decided that she was going to make a salad just for dad. Her mother and I had all been discussing dinner options with her when the idea that dad needed a special salad took root in her mind. Her voice rose in excitement as the idea bloomed. She mentioned something about olives several times and then whizzed off to the kitchen with her mother.

A short time later I walked down to the kitchen to see how my salad was coming along. I was informed that it was almost done and that in addition to the olives it also now contained yellow mustard, because "dad likes spice," as well as Trader Joe's Everything Crackers and peanut butter. She eagerly mixed the ingredients as she named them for me. She also noted that she had used the "inside of the olives," pimentos, as well.

The Greatest Salad Ever
Created by G for Her Dad

I will tell you here and forever that there is nothing on this Earth that could have kept me from eating every bite of something made with love by my child. I mean it. I knew that truth before she had added water to thin it out into more of a soup. I knew it when she was two and we would sit on the couch watching baseball together as she fed me masticated Cheerios. Whatever awaited me in that recycled plastic bowl was all mine from start to finish and I'd have a smile on my face the whole time.

My wife had posted the tale to a certain social forum before I'd sampled our daughter's culinary first. A friend had likened what he imagined the flavor profile might be to Thai cooking. As it turned out, the look and smell of the dish so unlike a Thai yellow curry I've enjoyed, with the pimentos replacing red bell peppers and peanut butter for peanuts. The Trader Joe's crackers are heavy on . The taste did indeed resemble that yellow curry.

My wife, based purely on smell because this was dad's salad, compared it to a fresh and pickled fruit salad in a spicy peanut dressing with flatbread croutons. Also, not far from Thailand.

It wasn't Thai, of course, but it was as she had named it: The Greatest Salad Ever. How could it be anything else? My daughter had chosen to make me a salad assembled in her wonderful mind and prepared with her loving hands and it was GOOD. That's not just a father's love talking. I ate every bite and I'm here to tell you that each one was good. No lie. What was important, however, was seeing, smelling, and tasting, the lessons that she had learned in the dish.

My daughter had learned both the joy that is cooking and the joy of cooking for those whom we love. She had learned to play with food in her mind, and to mix and match flavors. She had taken those lessons and had, through them, combined ingredients that would seem, to some, to clash into a dish that was pleasant to her loved one's palate. Seeing, and tasting, the love that her mother and I share for food manifesting in the person who has been our greatest gift ... well, there isn't a feeling like it. I will say, though, that it is the greatest feeling ever.
Email Post
Labels: cooking parenthood Playing with your food