Driving east on Ohio State Route 422 into Amish country, I turned to my friend Drew and mentioned, "you know, more than a few people in California, when you mention you are from Cleveland, assume this is what you mean."

We both roll up the window to keep out the various aromas of the country: road kill, manure.

It's early June. Cumulonimbus clouds tower 40,000 feet high ominously in the distance, somewhere over the Allegheny Mountain ranges just past Pittsburgh. North, over the lake, more clouds. But over this patch of Northeastern Ohio, Geauga County, south of Lake Erie and and hour east and south of Cleveland, there are blue skies above.

We're headed to A&A Shooting & Hunting in Garrettsville, Ohio for a nice relaxing afternoon of destroying empty cans and bowling pins and a very unfortunate piece of plywood (who never did anything to anyone).

The sun is hot, and we are all wearing black because, bad ass, that's why. Many things did get blowed up. We drank our waters, cleaned up our trash, and headed out back toward civilization...but not before the boys stopped for burgers at The Frozen Dee-Lite Cafe in West Farmington, Ohio.

"They've been doing slow-food for 60 years but they just didn't realize it," says Drew and he contemplated his 1/2lb mushroom and Swiss cheese burger with a side of potato pancakes ("aren't those latkes?", quipped Chauncey, a local bartender along with our expedition; "We're in Amish country, those are potato pancakes," Drew).

All burgers are made with local Amish beef: Ohio beef, raised without anti-biotics or hormones, with only a brief grain finish. Local dairy is used in making ice cream and milkshakes.

"What kind of shake did you get," Drew asked.

"They just throw a handfull of raspberries in with the shake, probably picked less than a mile from here."

The counter girl, who couldn't have been a day over 13, smiled as I dropped a dollar in the tip jar.

The place had probably been owned by the same family since the foundation was poured sometime in the mid-1950s I'm guessing. Maybe even longer.

There were no obvious signs of a horse hitch and trough, but I wouldn't doubt there having been one at one point.

At that moment, a horse and buggy went by. I dipped my fries into my shake. It was less a milkshake and more a "fresh from the farm heavy cream" shake, smooth, milky with bits of pulverized fruit strewn throughout.

It was a cold treat on a sunny day at a roadside ice cream parlor that itself was frozen somewhere in the 1950s: no kitch, no irony, just honest, good, slow food. 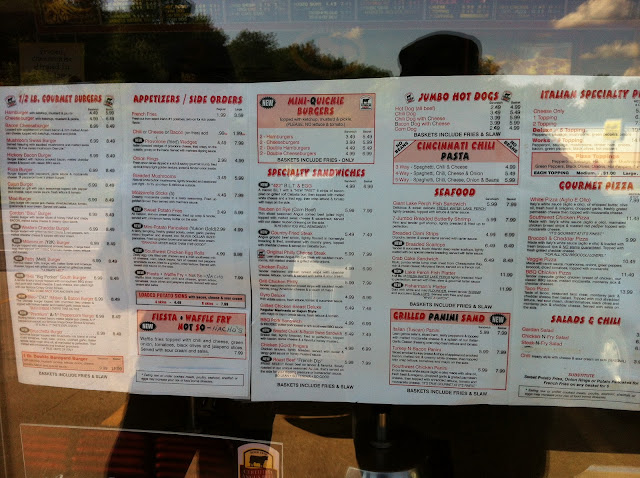