Canned "Beef Corned", How Bad Can It Be?

Hereford, Texas is located in northwestern Texas, not far from the New Mexico border.

Wikipedia tells us that it's the Beef Capital of the World. I'm not sure where that leaves the "queers and beers" part of the holy Texas trinity, but one guess that "what the queers are doing to the soil" may have something to do with the city's unusually high concentration of fluoride in the drinking water, also making Hereford "the town without a toothache."

The Hereford Canning Company is owned by Arrowhead Mills.

Coincidentally, Arrowhead Springs seltzer water, also bought in my recent excursion to Randas Market on 16th Street, features prominently in my bourbon Presbyterians...wonder what the impact on my Purity of Essence will be?.

Arrowhead Springs, the bottled water company, is owned by Nestlé.

To my knowledge, there is no connection between Arrowhead Mills (Hereford, TX) and Arrowhead Springs (Raelian controlled lizard people of Nestlé).

... And the Hereford Canning Company.

Frank Ford, of Hereford, Texas, founded both the canning company and Arrowhead Mills and was a noted Christian Evangelical activist with ties to Bill Graham. He was also a social activist and environmentalist who opposed planned nuclear waste dump sites and an aquifer that he claimed would endanger the water supply in western Texas.

He is said to have never drawn a salary more than three times that of his lowest paid employee. 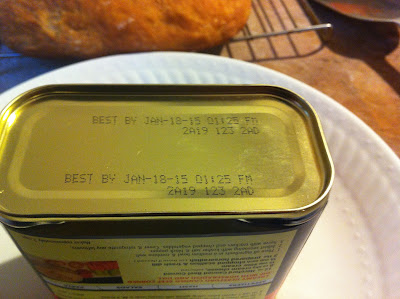 Checking out of the bodega, I asked the clerk if anyone else has ever bought the canned "beef corned".

"Sure, lots," he said while ringing me up. I didn't inquire further.

The "lots" of people who buy this stuff, nationally, seem to be from the Caribbean and specifically from Puerto Rico.

Canned corned beef, it seems, is a staple of the Puerto Rican diet.

The recall was triggered by discovery of Ivermectin, an anti-parasite drug, in meat originating from a Brazilian meat processing plant. Four products, made by three manufacturers, were specifically named in the recall. Hereford was not among those named, but did participate in the "voluntary" recall.

[ Ed. Note: Not to be confused with Levamisole, which has been found in cocaine recently. ]

Meat In The Can, Tell Me More:

What do all of these things have in common?

Jon Heder plays Napoleon Dynamite in the annoying and unfunny movie with the same name. If I want to watch socially awkward people acting foolishly, I'll go to one of those after-work office mixers for sysadmins.

Beethoven, inspired by Napoleon's idealism and efforts in bringing peace to a Europe torn apart by revolution began in 1803 working on a great symphony dedicated "BONAPARTE". Upon hearing that Napoleon had declared himself the Emperor of France, Beethoven hastily scratched off the dedication in a fit of rage (Beethoven seems rather partial to fits of rage) replacing it with "a Eroica", "to a great hero."

Napoleon, undaunted by the young Viennese composers slight, went on to conquer much of Europe and beyond, only to be finally defeated in 1815 in the Battle of Waterloo.

Commanding vast armies confronted the Emperor General with technical problems, food storage and transportation for the troops in a variety of unfriendly conditions was one of the most vexing.

Both the original and American incarnation of "Iron Chef" make silly references to the idea of "the warrior chef", but the brigade system of formal chef training, along with their rank and file ("chef d'cuisine," "sous chef," "chef d'garde manger," down to the humble dish washer) have origins in Napoleonic warfare.

One such real-life "warrior chef" was Nicholas Appert, the cook and soldier who, under Napoleon's direction, invented what remains today to be the essence of modern canning technique: food is cooked in a can which has been sealed air tight.

The presence of microbes had been known about for over 150 years in Europe, although modern germ theory didn't really gain acceptance until the late 19th Century. In fact, it would be nearly a decade after the heyday of the Napoleonic Empire before Louis Pasteur would be born, and another 40 years to develop the germ theory of disease.

Nevertheless, germs had been observed as had their spoiling effects on food. Salt shortages and expanding frontiers created pressure under which the idea of canning was "cooked." (See, I made a food metaphor!)

By the end of the 19th Century canned food was a staple of military diets, and had gained commercial success too: England and New York had canning factories as early as 1813 and 1812 respectively; New York canned oysters were considered a delicacy the world over (and over-harvesting, combined with pollution from overcrowding in New York and New Jersey and the waste from the Industrial Revolution lead to world-wide shortages later in the 19th Century).

Canning food, especially meat, was an economical way of tightening the belt during two back-to-back decades of blight in America: the Great Depression and World War II.

That was also when items such as Hormel's SPAM gained such prominence in the diet of Pacific Islanders, wayfarers between the American West Coast and the Pacific Theatre, and canned corned beef became so prominent in Old San Juan and other waypoints to Europe.

Canning, and the circumstances around which it gained popularity in the United States in the early and middle part of the 20th Century have no doubt had long term effects on the way we eat.

So to answer my own question: "Who eats this stuff?", the answer is clearly "we do, in great abundance, to this day."

Did I mention I love canned sardines?

But what about the product itself?:

This whole exercise came about months ago chatting with my pal Mike T at Delirium Cocktails on 16th and Albion.

Delirium came to be in or around 2001, replacing the long declining "Albion Street Bar" which was a good place, it seemed, to score meth or heroin and perhaps a little strange on the side.

While not the cleanest bar in the city (and, it should be said, not the dirtiest), Delirium at least pushed out most of the riff-raff. This left a riff-raff vacuum, which was filled by yours truly, our Benevolent Leader Larry and the rest of the neighborhood Alcohol Enthusiasts Club.

While almost all of us have moved away, and the staff has rotated in an out, we still convene as a group now and again to catch up, watch a ballgame and drink cheap cocktails in the presence of patrons and bartenders our age with a jukebox that plays actual CDs (who knew I'd be nostalgic for that one day).

I was explaining to Mike the "editorial process" and the "idea pool" which fuels this here blog (answers: "very little," and "drinking"). He suggested I find some cheap canned food the the bodega next door and write about it.

"Interesting pitch," I replied, using faux-journalist lingo. I washed that idea down with a shot of Fernet Branca and went next door to get some peanuts, California Lotto scratchers and a can of something I would not normally eat unless if my manliness was called into question.

Hereford Canned Beef Corned beckoned me, with it's ugly label: A tomato, perhaps to remind you that once this beef was food, an American flag, because America, and a thoroughly unappealing looking "beef corned" sandwich on grilled white bread with lettuce, tomato and perhaps...cheese?

The meat itself (or meat-like paste) resembles Spam, except it is a deeper hue of pink. Flavor-wise, it would be hard for a lay person to distinguish the two: the beef corned has a slightly grainier texture, and is less spongy than Spam. The two contain similar amounts of fat and sodium.

I would say that the two could be used interchangeably - wherever one would use Spam, one could use Hereford Canned Beef Corned.

Here are some of the horrifying ideas that sprang to my twisted mind:

We will not be making the sandwich depicted on the can. Ever.