Cocktail of the Day: Bourbon Presbyterian

"Have you ever had a press before?"

The question was from Riki, meeting me for a drink after her shift at a well-known jazz club, pub and restaurant on Cleveland's east side known to be a revolving door for Cleveland bar and wait staff.

"What's a press?" I asked, probably now more than 15 years ago. A press, I discovered, was a refreshing alternative to drinking bourbon "on the rocks" as I had become accustomed.

"On the rocks," or "double bourbon" (or more casually, "bouble-dourbon") was my entrée into the world of Whiskey. It was the mid-1990s and Maker's Mark had hit the Ohio bar scene aggressively.

It was a revelation that alcohol could taste good to someone like me, who would alternate between whatever sugary cocktail the goths found fashionable that week (amaretto sours, screwdrivers, gin and tonics that would glow blue in the black light of the goth club) and cheap beer (Rolling Rock) and cheaper wine (Carlo Rossi finger jugs).

Sins of the underaged, we would take what we could get and keep the conversation with the bartender to a minimum, fearing that at any moment we'd be discovered and banned.

But now I was over 21, and starting to appreciate real beer, real wine and real whiskey.

Maker's Mark is already quite sweet. It is also a bit harsh, at 95 proof, so on the rocks it was.

With a little added water, the nuances of Maker's Mark came forward: vanilla, a tinge of smoke, oranges, molasses, honey, flowers. Yep, I just described bourbon like it was something you could get in a candle at Bed Bath and Beyond, sue me.

However, several 6 ounce pours into 12 ounce tumblers would quickly take it's toll. Perhaps in introducing me to the more austere Presbyterian, Riki was teaching me something about pacing.

I had tried whiskey and cola (found it too sweet) and whiskey and ginger (the same). But the press, the noble Presbyterian, offered a compromise that hadn't occurred to me. 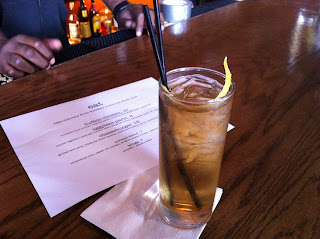 Fill a Collins glass with ice cubes, mix the ingredients in the order listed above, garnish with a twist of lemon and perhaps a shake of bitters.

Why "cocktail"? No one can agree to the origin of the word. We like to think that it's a drink that one drinks first thing in the morning, on the tail of the rooster's morning call.

Not only is that probably wrong, it probably makes us sound like drunks. Whatever, it's 11AM somewhere in the world.

There's also some disagreement on the origin of the term "Presbyterian Cocktail". My guess is that the name is "in honor" (in a passive-aggressive sort of way) of Calvinist Temperance leaders.