Inside the Chef's Studio with Dottore Gustavo: Chowbacca 415

And now, another edition of Inside the Chef's Studio with Dottore Gustavo: 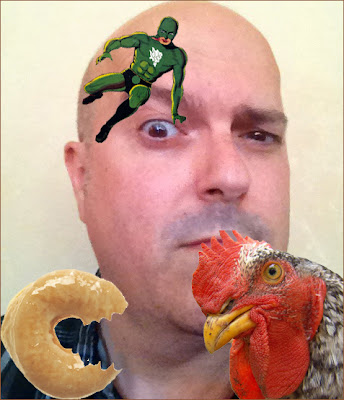 Today's guest is Chowbacca! founding father and benevolent-ish dictator Larry McCarley. Born on a mountain, raised in a cave by his faithful butler, Alfred, Larry killed, cleaned, and ate a bear when he was only three.
It was in that perfect, genuine, complete, crystalline, pure moment that his mad, impetuous, torrid love affair with all things food began. And he hasn't looked back, except to see who exactly had been following him. Are you curious? It was a squirrel. Now, let us join this lovable rogue for a bit of T&A … er, Q&A with Dottore Gustavo, shall we?


What is your favorite guilty pleasure food?

I regret nothing. Well, that one night in Bangkok ...

What is your favorite curse word?

Fuck, I don't know. Fuck, I guess. I fucking use fuck like a fucking Southerner uses fucking salt, liberally.

What is your favorite knife?

Any knife that isn't in my back. Other than that I use the fuck out of my 8" Shun Santoku, although my wife's 8" Wüsthof is a champ too. I love all of my knives, really, and my hatchet, and my Russian army inspired camping shovel with the super sharp blade. I love a good tool in good working order.

I make time for one sport only, and that is baseball. I love baseball. I don't much care for other sports and they'd just eat up a bunch of my time anyway. Sorry, curling. :(

Within baseball, that greatest of all sports, I follow the Cleveland Indigenous Americans, which is the team I grew up with, the San Francisco Giants, which is the team I call home, and the Anaheim Angels of Los Angeles and/or Anaheim and sometimes Los Angeles, which is my team by marriage, or team-in-law as I like to say. I love them all. I love it when they win, hate it when they lose, and I love the game more than any one team. Oh, and fuck a bunch of Dodgers.

What would be your last meal?

I might as well say unicorn tartar because I'm not going anywhere. Period. That said, foie gras served in the skull of some PETA jerk with a glass of Champagne.*

If you weren't a chef, what would you want to do?

I'm not a chef. I'm a cook, like that Stubbs guy on the barbecue sauce bottles but with less melanin and a third dimension.

What profession would you not want to do?

I have tremendous respect and love for them but I would never be a professional cook. Repetitious tasks performed in a hot place full of fire and rapidly moving cutlery to serve a bunch of ungrateful asshats day in and day out … not for me. I salute those who can do it, and the wonders they often produce, but I'm not that guy. Let me cook at home for my family and friends. That's where I belong.

This reminds me that we had threatened to do a hot sauce series on Chowbacca! and have yet to get it rolling. I'll answer this question and more when we actually get around to that series. 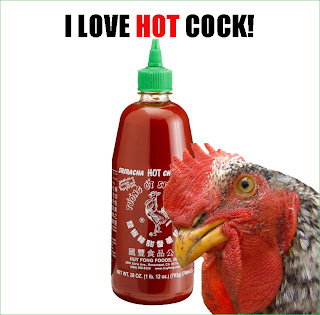 Actually, my wife and I are nurturing a few jars of home made hot sauce at the moment. What's the scoop? Stay tuned ...

If Hell exists, what food does the devil force chefs to cook for eternity?

*No PETA jerks were harmed in the making of this feature or ever will be harmed as a result of it. Ever.
Email Post
Labels: bloggers blogging chowbacca hot sauce inside the actor's studio james lipton larry mccarley sriracha Tofurkey Loaf
Location: Anaheim, CA, USA