The desert was hot. The desert is always hot. Hotter still when you are locked in a Winnebago on the side of a road nobody ever bothered to name. Hotter than hell's flames when you are also frying a chicken.


How did things going so right go so wrong? I was the king, "Los Pollo Hermano" they called me. Men raised drumsticks in my honor. Women pulled me to their grease-smeared lips to confess their love for me. I had it all: Thighs, breasts, wings ... "Los Pollo Hermano" ... The Chicken Brother.


Then came the cartels and ... The Colonel. You thought him a myth? A tale old women tell to scare children at night? Oh no, my friends. The Colonel is as real as the desert sun and far more dangerous. The sun can only burn you, and only if it can find you. The Colonel has ways to find you, and when he finds you he would sell you a poison chicken, or he would butterfly you like a chicken and leave you to bleed in the desert heat. The Colonel is a madman. El Pollo Loco.


Everything had been so right ... so right ... until the The Colonel and his men came for my secret recipe. They approached me at the fiesta. The Colonel wore his immaculate ice cream suit and string tie.


"Buenos tardes, amigo" he said as he sniffed the air. His moustache was thick with at least eleven herbs and spices. He had been trying to make my chicken and had failed. The Colonel did not fail. I knew at that moment that I had to fry my birds away from prying eyes and sniffing noses. I knew from that moment on that only my chicken would ever be right again.


The desert sun made the Winnebago like an oven. I laughed like a lunatic as I lowered the bird parts into the bubbling oil. Not today, Colonel. Not today. 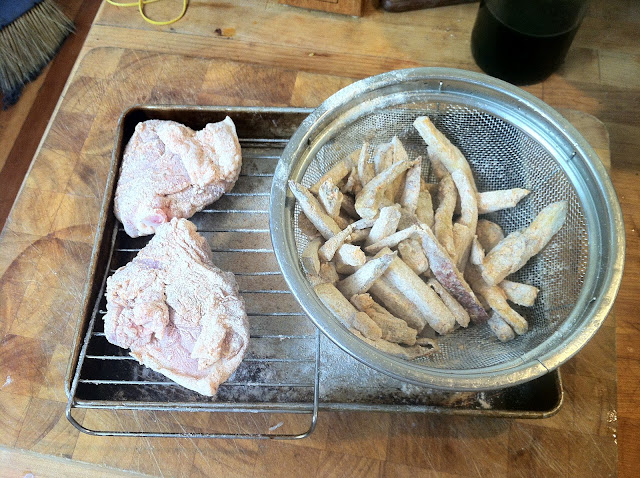 * If you don't have Everglade's Seasoning, just mix 8 parts salt with one part each of powdered thyme, powdered oregano and powdered rosemary and a few pinches of filé (can be found in specialty stores - optional). If you want the authentic Everglade's experience, replace 3 parts of salt with MSG!

Mix about half of the Everglade's seasoning with the buttermilk, the other half with the flour.

Add paprika to flour. Set aside.

Remove chicken parts and let drip-on a wire rack for a minute or two before dredging.

Dredge in flour mixture, shaking off excess flour. Let rest on a clean wire rack for at least 3 minutes prior to frying.

Work in batches, you do not want the dredged chicken to rest more than about 7 or 8 minutes before frying.

"Sear" both sides to cook flour initially, preventing steam from boiling off the secondary side.


Proper fried chicken requires a few key pieces of equipment and a few special skills:
Probably no one, so far as I have encountered, explains heat management in frying chicken better that Alton Brown, so let's defer to him to explain the science of it (the gist being: too cold and oil permeates the crust, too hot and the crust burns before the meat is cooked):

So, you've gone through all this effort to fry chicken... why waste your oil (and excess dredge)? Why not make some fries?


All (root vegetable) fries are done in stages: cold and hot.

Cut the yam into fries and, prior to frying any chicken, blanch them in oil over low heat (about 300ºF) for about 8-10 minutes a batch (my yam yielded two batches).

Fry your chicken, then using a spider skimmer, skim off any large flotsam from the oil and discard.

Mix yam in left-over buttermilk mixture and drain, then dredge in the dredging pan and strain off excess flour. 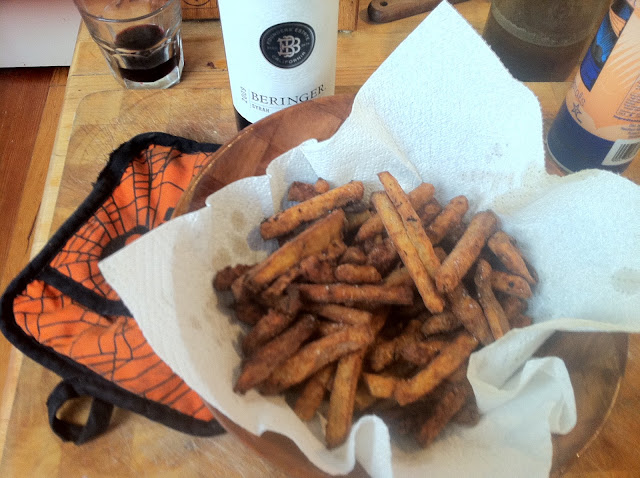 How many different ways are there to make fried chicken? A zillion. Try any of these variations:
** Pineapples contain an enzyme that rapidly breaks down the tougher proteins in meat, but can result in mushy, mealy meat. Definitely not "good eats".
--


As you can tell from the introduction we're excited for season 5 of AMC's awesomely disturbing Breaking Bad. Welcome back, Walter White. (Editor's Note: He is the danger!)

And Chowbacca! loves Gene and Dean. Hope this isn't goodbye forever. We had some real good times together.