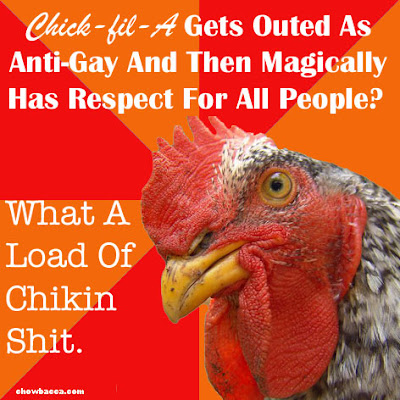 Which reminds me of a joke:

Q: What do you get when a company president flippantly shoots his mouth off to the media about his hateful anti-gay agenda and turns a PR shit storm into a deluxe PR shit storm?

A: A cowardly, insincere press release from the Vice President of Corporate Public Relations.

Considering the massive amount of shit that Donald Perry was shoveling for Chick-fil-A lately it's no wonder that his heart attacked him.

Oh, what the hell. Let's take the high road and give the guy a proper send off:

(WARNING: Video Not Suitable For Work or for country-ass bible-thumpin' gay-hatin' hoe-down funerals for corporate apologists)


Was that enough "honor, dignity and respect" for you, Dan Cathy? No?