The original Ohio City Market began operation on a tract of land donated by Ohio City landowners Josiah Barber (Ohio City's first mayor) and Richard Lord in 1840 at the intersection of Pearl Road (now West 25th) and Lorain Avenue. The area was deemed to be used as a market henceforth by the Ohio City Council and named "Market Square."

Ohio City (City of Ohio) was formed out of the former Brooklyn Township and incorporated 2 days before Cleveland on March 3rd, 1936.

In 1840, then 4 year old Ohio City was an independent rival to Cleveland, and the area now known as metropolitan Cleveland had several such open-air food markets and in some cases enclosed butchery shops. Think "Gangs of New York" if you want a visual of how this must have appeared at the time.

Commerce and tax revenue suffered in Ohio City when the Cleveland City Council in 1836 decided to bypass Ohio City entirely with the funding of the Columbus Street Bridge, a floating bridge over the Cuyahoga River.

This started the "Bridge War", which was well underway when Barber and Lord created their market, an enticement for Ohio City residents to ply their wares and for Ohio City to benefit from sales tax.

The Bridge War, a fascinating - and bloody - period of Cleveland history dragged on until 1854 when Cleveland annexed Ohio City.

At the turn of the 20th century, population explosion lead Cleveland City council to acquire additional land near the original Market Square to rededicate a new city market in the district now referred to as Cleveland's Near West Side (formerly Ohio City).

In 1912, at a cost of $680,000 the new West Side Market was opened to the public. According to the West Side Market web page, "the centerpiece of the market, the yellow brick markethouse with an interior concourse, was designed by the architects Benjamin Hubbel and W. Dominick Benes who also designed other famous buildings in Cleveland, such the Cleveland Museum of Art and the Wade Memorial Chapel in Lakeview Cemetery."

Throughout the two World Wars, Cleveland flourished. Economic decline in the 1960s started to take its toll on Cleveland neighborhoods and institutions. In 1968, the Ohio City Redevelopment Association was chartered to preserve and protect the community of and historical landmarks in then re-named Ohio City Historical District of Cleveland, Ohio.

In 1978, the markethouse of the West Side Market was deemed a national historical landmark, and monies were set aside for its renewal.

The West Side Market has operated continuously for 100 years, a celebrated part of Cleveland's History. It's Ohio's gold!, if you must.

Be sure to bring your own push-cart, because if you don't your hands will quickly become full.

A typical visit to the West Side Market begins with a snack.

You will have to pass through the gauntlet of produce sellers in the market's outdoor ring (vegetable and fruit carts in two perpendicular tented hallways outside the main markethouse) in order to get to the good stuff indoors. But do make note of price and quality, so you can plot some vegetable and fruit shopping into your route back to the parking lot. 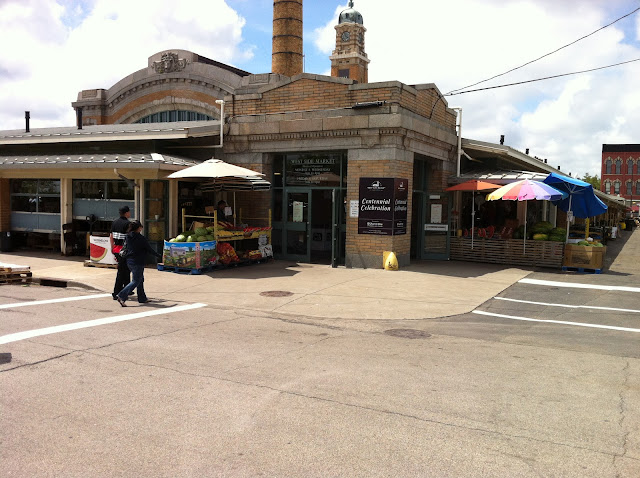 There are a variety of prepared food options once you get inside, baked meat pies, gyros (always with a sizable line thanks to Chef Michael Symon), made-to-order Breton crepes, a taco stand, pastries, breads, bagels, Chef Jonathon Sawyer's Noodlecat noodle and broth "pop-up" and a hot dog stand.

But when it comes to shopping at the West Side Market, Chowbaccans! are traditionalists and we head for Frank's Bratwurst in stalls G-3 and H-3 for a hot brat in a hard roll with mustard and kraut. Sneak up the stairwell to the observation deck and watch shoppers while you eat and plot your route. 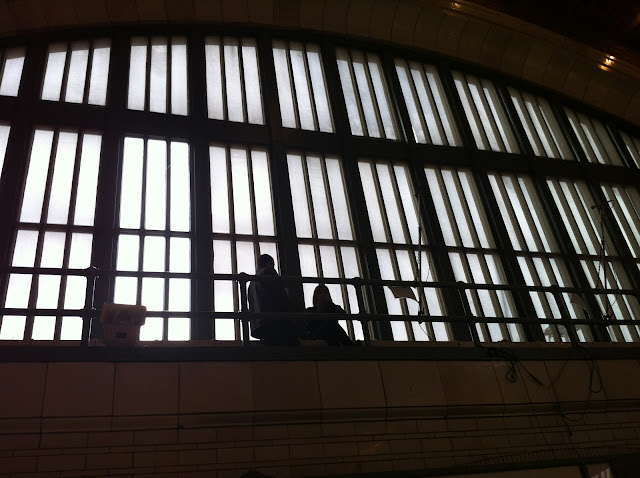 I have a few must-visit spots whenever I go to the West Side Market, but first comers should start in one corner and meander around from stall to stall - planning on taking over an hour to explore the entire market.

Make note of stall numbers of your favorite shops - they are carved into the brick and mortar in corners of each stall.

City Roast Coffee and Tea - for that essential early morning double espresso on a crisp Cleveland winter morning, tea, hot chocolate or a slap-you-awake iced toddy in the summertime. 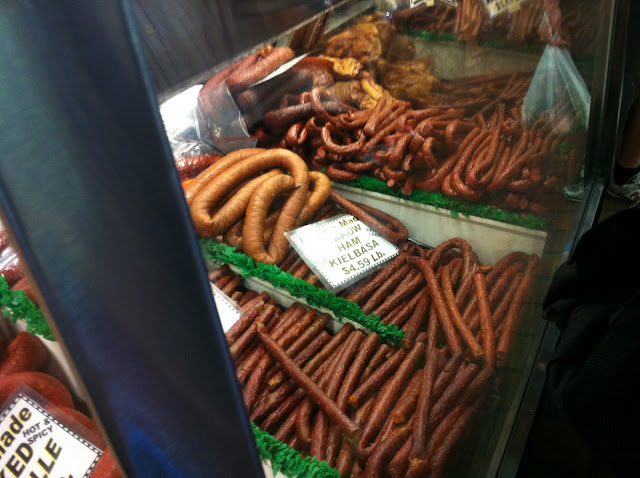 Stop by Czuchraj Meats for their world famous jerky (thanks again, Michael Symon), smokies (thin smoked sausages that are great snacks for your inner Pole), kielbasa, bratwurst and all sorts of Eastern European inspired meat goodies.

Kaufmann's Poultry is the place for Kosher chicken, and we hope you love cockscones, necks and feet as much as we do.

Spanos Bakery has a dazzling array of ways to break out of your Atkin's Diet prison. 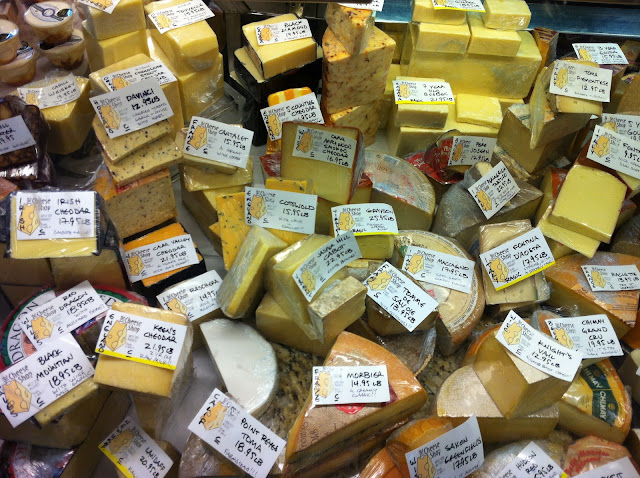 The Cheese Shop is the closest North Eastern Ohio gets to the dizzying array of cheese and customer attentiveness you find in San Francisco's Rainbow Grocery Cheese Department. If it looks good, ask for a free sample! And don't miss that good Ohio honey. 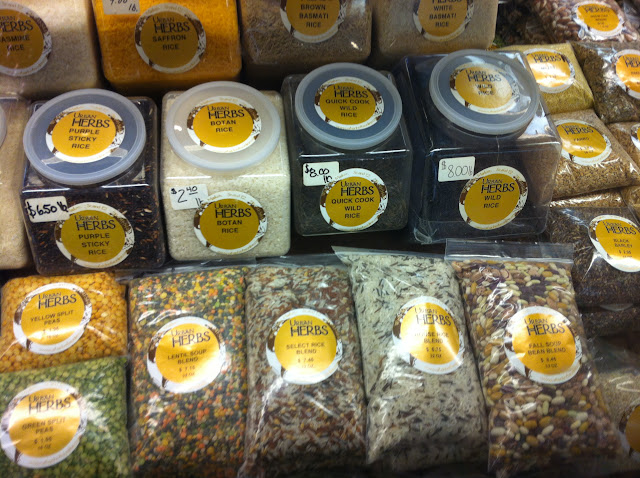 I try to always buy my spices whole, and in bulk. While there are many great ethnic markets in all over Cleveland, Urban Herbs is a great one-stop-shop for most of your whole spice needs. They will even grind up your own custom spice blends, taking nothing away from their own freshly ground mixes. 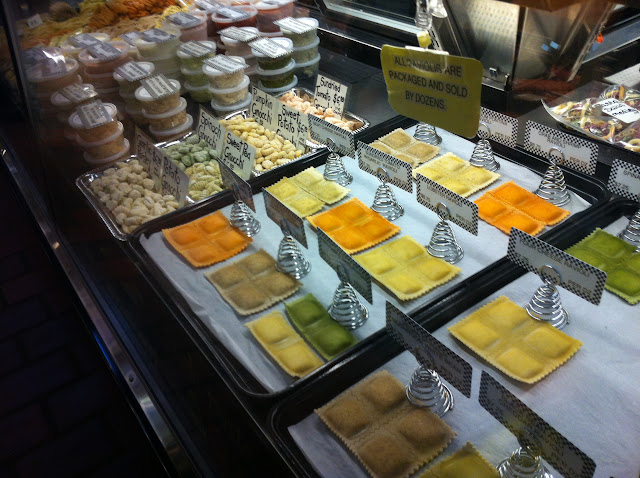 Also a can't-miss is Ohio City Pasta, which provides noddles to Noodlecat and dozens of Cleveland restaurants. All pasta is sold by the pound or by the dozen (stuff pastas), available fresh or frozen.

And don't forget to save some money for the outdoor produce sellers, the same ones sped past on our way in: 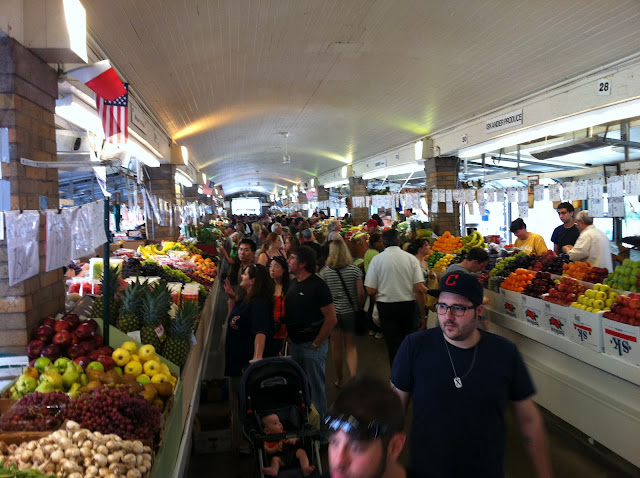 --
Market Square is of course more than just the market.

Directly behind the market is the Market Garden Brewery where you can stop for a cold one after all that shopping (or before, or during).

There's also the Market Avenue Wine Bar, Bar Cento, ABC The Tavern, The Flying Fig and many many other great restaurants and bars. 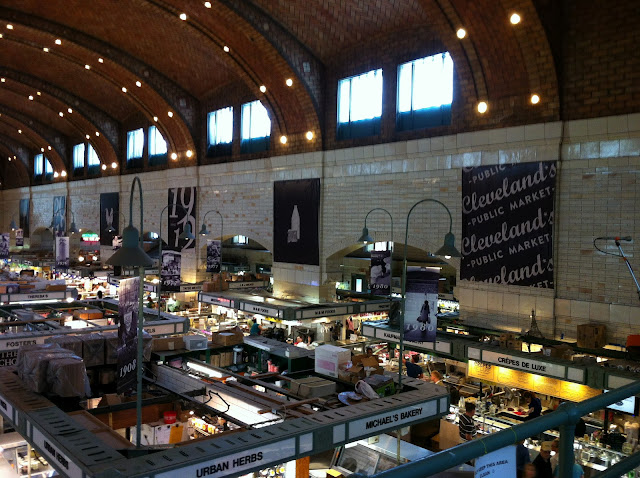