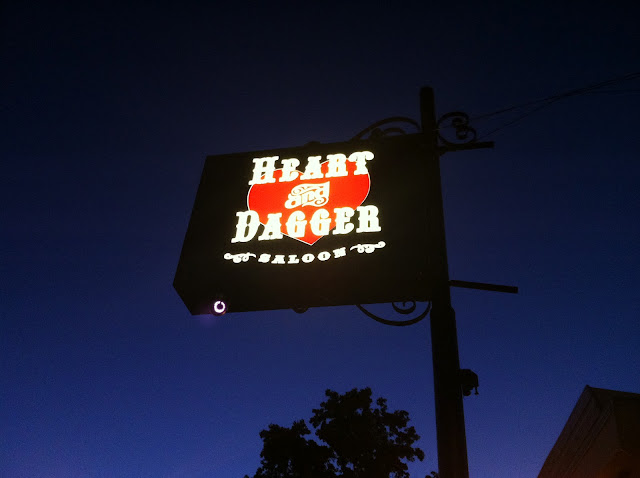 One of my favorite things to do on weekends is to embark on the great journey over the vast, wide San Francisco Bay into the strange yet strangely beautiful Land of Oak.

You would think that, just as Mordor, one does not simply walk into Oakland and you would be right.

But in about 15-25 minutes you can get from 16th Street BART to 12th Street Oakland Civic Center, which beats the hell out of actually trying to drive to Oakland (or back) on that confounded Bay Bridge.

Once at 12th street, you are close to a number of good cocktail and snacking options.

Lake Merritt is a good wheel and spoke for getting to several favorite destinations we'll be visiting on Chowbacca! today.

We start with Radio Bar, right off Civic Center on 13th Street.

I've been to Radio Bar many times and the only thing I can remember ever drinking there is IPA and heavy pours of Powers Irish Whiskey. Fear not, hipsters, they have PBR tall-boys.

They let me roll my bike inside - I didn't want to leave it out on the street as the neighborhood can be a bit dicey.

A couple of drinks, and off I went...

On to the joyfully dark Ruby Room on 14th Street, right off the lake.

This is a bar where one goes to hide from sunlight and lose track of time. Most of the time the bartender controls a Pandora station being fed into the house sound system through the bartender's iPhone, ask nicely and tip well and you can make requests.

The back room features not one but two half-size pool tables (better than the 1/4 size ones often seen in SF), covered in red felt.

The pours are heavy and the clientele are of the professional drunk stripe.

In need of Vitamin-D, I escaped the gravity well of the Ruby Room on two wheels to take a sobering ride along the lakeshore and up Grand toward Oakland's "kinder, gentler" Zeitgeist, the Heart and Dagger Saloon.

Like the transformation of San Francisco's Albion Cocktals into Delerium Cocktails, the Heart and Dagger transformed a flagging local institution into a cleaned up version of itself. Former Delerium manager Erik Sadauskas and his wife Allison bought the bar a few years ago and fixed it up, joining in with other local businesses in the recent renaissance of the Grand Lake neighborhood.

Just like when he managed Delerium, Erik takes pride in having an excellent (old-school, non-internet connected, CD playing) jukebox with some pretty rad, often obscure selections from the 1980s all the way through the modern era.

The bar opens up to a sizable beer garden behind the bar where one can smoke cigarettes of either the tabacco or "other" variety.

Ask for a "pink" shot, a pre-made sugary concoction, perhaps a nod toward the "Ass Juice" of the Double Down in Las Vegas.

If you are feeling a bit peckish, as I was, you can take your chances at the retro drive-up Kwik Way Burger next door, or walk a few doors down the other direction and grab a couple slices of pretty good pizza at Lanesplitter Pizza.

Feel free to bring food into the bar, if you don't mind sharing a fry or two with the lovely Allison, Heather or Suzanne.

The ordeal of having many shots shoved into one's face on a hot Oakland Saturday afternoon takes its toll, so I called for back-up: namely, someone I knew with a van who could transport me back to BART and a sobering train ride back home without risking life and limb on my bike.


My friend with the van insisted me make one last stop at the Merchant's Saloon between Chinatown and Old Oakland on 2nd and Franklin.

Merchant's Saloon is what I would describe as the perfect dive: sassy tattooed bartenders, a large contingent of "industry" patrons, an affection for heavy pours of rot-gut Bourbon, punk rock blaring and an actual piano (should you want to lead the bar in a rousing chorus of "The Piano Man" or better still "The Piano Has Been Drinking").

Lest you not know "the rules" they are posted on the wall of the heavily graffitied bathroom.

My last drink: a tall glass of water, no ice.

Oakland... it's a nice place to visit, but I had to get home. Still, you haven't seen the last of me, Oakland dive bars.