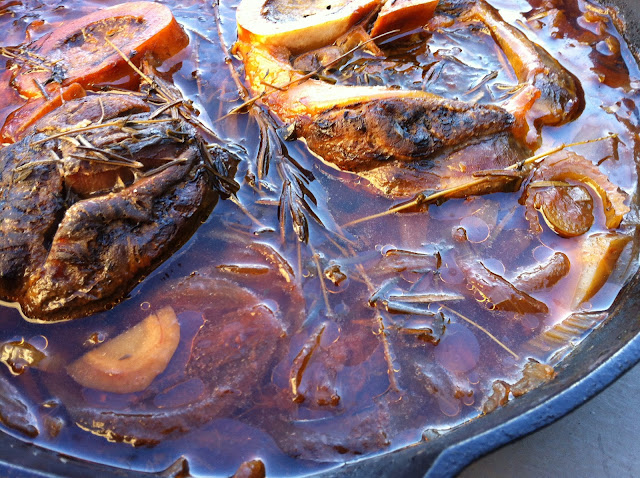 Recently my pal John rediscovered the joys of the Crock-pot and has since then embraced the rib-sticking goodness that is food braised ever so slowly over many hours... and it is a cooking method that fits his lifestyle: busy. When he's not helping run the art studio he and his roommate opened recently, or practicing or playing with his band, or helping a new generation of kids young and old find their next ax you might find him at a local rock club.

The point is: there's scant little time to fuss over a cutting board and a stove, and often dinner is at 4am, 12 or more hours after leaving the studio.

Lately things have been hectic for me as well, and with work and social life demanding more and more of me (not to mentioning writing this damn thing ;), I've been cooking with an eye toward minimum effort and maximum reward.

A few weeks ago it was chili, this week something caught my eye at Olivier's Butchery: nice, thick beef shanks, bone in. And not just any bone, but the animal's leg bones. The leg bones are largest bones in most beeves bodies, and also the largest manufacturer of blood cells. Therefore, containing the most delicious marrow.

Sadly, beef shanks, or any kind of shank, is no longer the bargain meat it used to be. Still, it is cheaper than premium cuts like prime rib, tenderloin or even the recently (as of the last 15 years) en vogue hanger steak (French: onglet). The main reason is that these premium cuts are more tender, requiring less cooking time, and generally have a higher ratio of meat to sinew.

Sinew is made of tougher proteins that take longer to cook; while that makes for a bad steak, it makes for great braising meat. The shank is sinewy because It has to do more work: namely supporting the weight of the animal, anchoring it's muscle to it's skeleton.

Exposed to high heat quickly, sinew turns to rubber, but slow and low, it melts into unctuous gelatinous goodness.

Beef shanks in hand, I was off.

I had bought two beautiful cross-cut shanks, about 1 1/2 inch thick.  It was late, and I wanted to throw something together quickly then go to sleep, another long day at work ahead of me.

I rummaged around and found a few things, threw them in my cast iron, put the lid on, put the works in the oven and went to sleep. 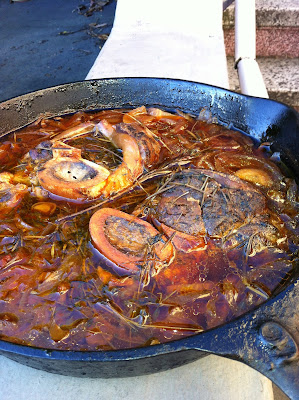 Osso-bucco Braised Shanks With Onions and Fennel:
Season shanks on both sides.

In a white-hot cast iron pan brown shanks for 3-5 minutes on each side. Reserve and reduce heat, browning fennel and onion slightly for a few minutes. Add tomato paste and allow it to brown slightly for a couple of minutes, stirring constantly.

I usually wake up at least once a night... Okay. I wake up about every 40 minutes and it's driving me bananas. At some point, you will probably wake up in the middle of the night. Check the water level and add more if you think it needs it. Add more herbs.

I like to save a little bit of herbs to add after I remove from the oven. Let cool and move to a refrigerator safe container. Any excess fat can be easily remove when you get back home. The liquid should be jiggly, like gelatin. That's flavor!

I use this to toss with fresh pasta or gnocchi, or heat up and top English muffins with a fried egg for breakfast, or just heated up and eaten like a stew.

Clevelanders can see the Founding Fathers frequent several local venues. For now, everyone else will have to make due with Youtube: