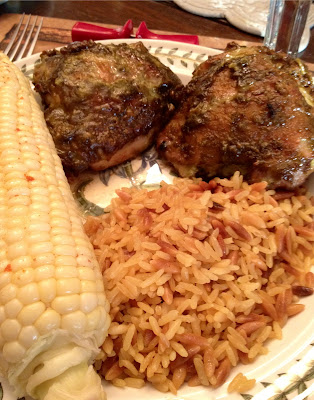 Barbecue sauces come in many colors: red, white, yellow, green and it doesn't end there. I love them all, and mix them up on my grill whenever possible. Recently my wife made a large batch of yummy green peanut dipping sauce for another meal and had quite a bit left over. Not willing to waste food and always willing to play around with things we came up with this Amercianized variation on chicken satay ready for the grill. 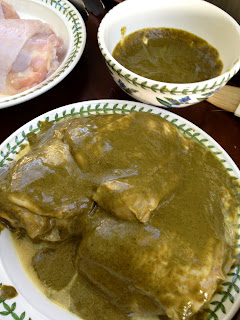 The peanut sauce recipe is a tweak of a version that my wife received from a friend. The original with her tweaks (1/4 cup more peanut butter and the added Sriracha kick) is below. It will produce enough sauce for a good sized group of humans. As always, let the recipe be your guide but tweak it however seems right for you. 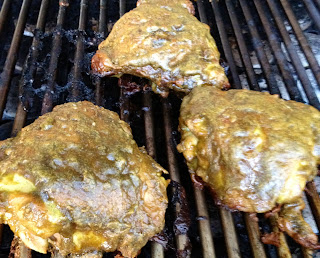 Green Peanut Sauce:
10 cloves garlic
2/3 bunch cilantro
1 bunch green onions
3/4 cup peanut butter
1/2 cup soy sauce
5 teaspoons sugar
1/2 teaspoon hot chili oil
1 tablespoon Sriracha
When I used the sauce on chicken it had been around for a day and was even better than the day before. You may want to consider making the sauce ahead of time, but it isn't necessary.
I started out by brining the chicken Ruhlman-style and then used the green sauce like any barbecue sauce. After slathering it on I threw the chicken parts over indirect heat and applied more sauce as I turned them on the grill.
The sauce is sticky, so be ready to scrape that grill down when you're done. The results, however, will be more than worth your effort.
Happy Labor Day! 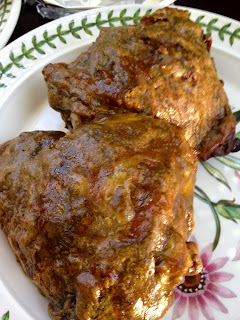