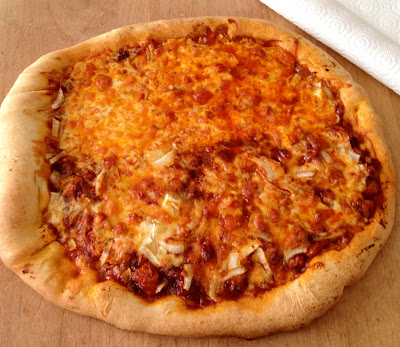 Disclaimer: The pizza pictured above is not the true Chowbacca BBQ Chicken Pizza. Half of it is ALMOST a Chowbacca Style BBQ Chicken Pizza with white onions subbed for the red onions of the actual pie for reasons I do't want to get into. I can't even follow my own recipes sometimes, I suppose. The other half is a cheese pizza with the Chowbacca cheddar and Havarti cheese mix because that is what my family wanted that night.

I had a pic of the real pizza somewhere and gremlins ate it. Gremlins ate the picture, that is. My family and I ate the pizza. It was delicious.

Anyway, I'll add a pic of the real deal next time I make this tasty pizza, I promise.

That said, at last the story of the Chowbacca Style BBQ Chicken Pizza can be told!

We start with dough Ruhlman style. I like a cornmeal crust. You can make whatever kind of dough you like, but it had better be able to hold up to some heavy toppings and sauce.

While the dough rests the rest gets going.

First, the sauce (Preheat your oven and pizza stone or baking sheet to 350 degrees while you put the sauce together):

Heat the oil in a saucepan. Add the garlic and sauté until brown. Add the remaining sauce ingredients and reduce heat. Simmer for about 15 minutes until thickened*.

This sauce is a variation of a great and simple Kansas City sauce I found on about.com. I use 4 cloves of garlic over their two. Hey, it's still a pizza, right?

My other tweak for the pizza sauce version was to leave out the vinegar and water. This gives the sauce more of a marinara thickness which is great for pizza. Be aware that for a smaller pie you're going to have extra sauce unless you want to adjust the recipe down, but the sauce is great on its own so having some extra in the fridge is a good thing. Just remember to dilute and simmer the remaining sauce with a little water and white vinegar if you're going to use it as BBQ sauce or just use it as is on sandwiches.


Yes, yellow or white onions will work too, but red is ideal. You can mince them or cut them long. I've done both. Minced is less of a messy eating experience but messy can be fun. Mostly, I mince.

*You'll want to toss your chicken breast(s) into the oven for 15 minutes and shred some cheese while the sauce is simmering. This is also when you'll want to finish prepping your dough.

While the sauce is simmering and the breasts baking roll out your dough and brush a little melted butter ... yes, butter ... onto your dough. Be careful not to drench it or you'll have a soggy pizza. Then preheat it on a pizza stone, baking sheet, whatever at 450. You can leave the butter off or sub olive oil if you must, but must you? Must you?

By now your sauce should be simmered and cooling and your chicken should be out of the oven and cool enough to cut into pieces. Now is the time to get cutting.

Pour some of the cooled sauce into a medium sized bowl, add the cut chicken and onions and mix it all up together until everything is coated in sauce. Remove the dough from the oven and cover it evenly with the meat, onions and sauce and then top evenly with a blend of the shredded cheddar and Havarti.

Back in the oven. Watch and wait. Usually baking takes about 25 minutes at 450 in my oven. Your oven will likely vary. When the cheese is lightly browned and the crust is cooked through, it's done.

Where's that picture of the real deal, you ask? Look! A dancing chicken!!!