Deth Veggie the comic book super villain* made me swear up and down I would never write this place up.

I am a treacherous blogger, Deth Veggie. You should know that. I cannot be trusted - I love liver! - when will you ever learn?! (By the by, this: "?!" is called an interrobang, supposedly. I learned this on the IRC, which is like a super-reliable version of the never-ever-ever wrong Wikipedias, which as we know, is constructed of pipes, it's not a dump truck. Science!) 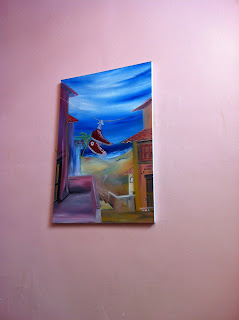 Mise en scene: after carrying my poor, broken bicycle around the corner of 22nd and Valencia to Valencia Cyclery (and returning with a new shiny helmet!) on sunny Saturday morning, I endeavored to fuel myself with late morning/early afternoon fare (preferably involving eggs).

The line outside Boogaloos had returned to its pre- Burning Man levels, and not wanting to wait 25-45 minutes for food I'm perfectly capable of getting stoned and making for myself ("it's a tofu scramble, maaaan, and it has like... cheese? and refried beans and like... basil and stuff"), we rounded the corner in search of less popular pastures.

"BEST CHILEQUILES IN THE MISSION," says Deth Veggie, who has never used hyperbole ever in his life. Ever. "Last week they had a special: steak and chilequiles." He continues, with a laugh, "I was expecting maybe some chopped skirt steak or something but no, it was just a steak, SLAPPED ON TOP OF THE CHILEQUILES!"

Deth Veggie is easily amused. I however was still a little bleary that morning for the barrage of word balloons being pelted at me in Comic Sans.

That said, I found the idea whimsical and also worth pondering. As Tony Bourdain pointed out, at least in the 1990s in New York city, the best cooks in the world all seem to hail from South- and Central America. And more over, the best of the best all seem to come from Oaxaca.

So to make something as... well, humbly plated as a steak plopped down on top of chilequiles makes a twisted sort of sense to me. If I'm a line cook and I live in the Mission, work downtown at some fancy-ass gringo restaurant all week and want to just settle in for unassuming comfort food, where do I go, what do I eat? Mission's Kitchen... steak and chilequiles.

Mission's Kitchen is Latin to its core. Modern takes on folk art adorn the otherwise plain walls. The tables are tiled with faux ceramics (the bario version of checkered tablecloth) and adorned with several different types of chile sauce. Nearby, a family eats as corridas y cantos ranchera drift from their boombox, occasionally competing with mariachis (who the staff members shoo away after playing one or two ballads then going table to table for tips).

The menu consists of, as we say, "all the things" I would want to try (particularly the omelet "de raza primero" which features cactus and chile sauce, and the mole which I am sure is muy auténtico). The roasted fish looked particularly appealing, many dishes eschewing heavy starchy accompaniment and rich sauces for simple enchilada sauces, salsas and sides of roasted vegetables.

The only thing - and perhaps I didn't look hard enough - that I found missing was the breakfast classic of beef done "en ropa vieja" style (essentially a carnitas for beef chuck or sirloin, stewed then dry fried until slightly crispy).

Breakfast for 4 including coffee and juice was under $45.

* He is a gentle giant, and the comic book villain thing is just a day job. Everyone has to pay rent, you know. San Francisco...