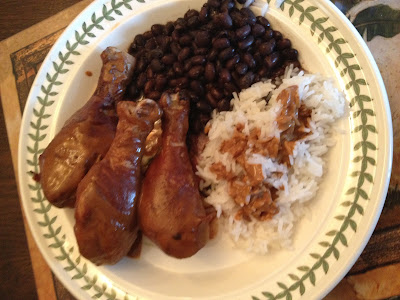 Like many recipes throughout the history of the world, mole was born by combining whatever ingredients were available in the region. And just like your mom's fried chicken isn't exactly my mom's fried chicken and your barbecue sauce isn't mine, there isn't one mole there are many.

Thanks to the Intertoobs and the Networks of Food, over recent years so much of the world has gotten so recipe-cenrist that a lot of that pioneering cooking ability and creativity is being lost for some folks and that's a shame. Loving your grandma's recipes is one thing, but if you blindly cook from some stranger's recipe you're missing out on a lot of what cooking is about. Where is the thrill and sense of accomplishment in cooking with a safety net? Where's the innovation and experimentation; the tasting and perfecting? Where, I ask you, is the love?

Cook more, I say, and follow less. In that spirit I created a mole from ingredients that were already in the house and garden. No trips to the store. No "chickening out" for delivery pizza. I had some challenges. I learned some things. I tested my ability to improvise a meal and I made something I never had made before. How fun is that? Plenty.

Most of my friends and family have been onboard with this philosophy for as long as I've known them. That's awesome sauce, but I'm not writing this post for them. I'm writing it for the recipe-burdened out there in Internet-land.

And now, my Mole Debut!

Step one, with only a few hours until dinner, was to set the chicken to brining. Whichever mole recipe I chose I knew that I would want to compliment a sweet, spicy sauce with some salty chicken parts. Mmmm, sweet and salty ... *drool*.

Hm. While I didn't have a whole chicken I did have some drumsticks in the refrigerator. I was going to have to either find a recipe for drumsticks (unlikely) or dial the recipe in for the meat available. 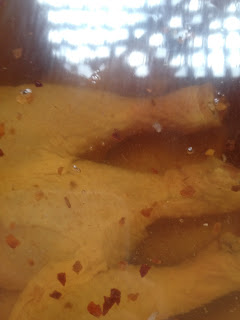 Next, I would need a recipe to work from since, as I said, I had never made mole in my life. When looking for recipes I added "quick" and "simple" as keywords because I had a feeling I was going to need time to improvise. That turned out to be a good move.

Having had no intention of strictly following the recipe anyway, I chose this quick and simple recipe from Paula Deen via The Food Network website. It also seemed appropriate since Food Network has contributed so much to the whole "use a recipe" craze. What's that? Ah. Not to worry, there isn't a single stick of butter in the whole recipe!

I hit my first challenge with the Paula Dean recipe right away. It wasn't such a big deal, I felt, to leave out the cumin that I was completely out of, but a lack of diced tomatoes might be a big problem. I had fresh tomatoes in the garden, but I had never diced and drained my own before. No time like the present, I thought, and set about consulting the Internet for a good how-to like this one. 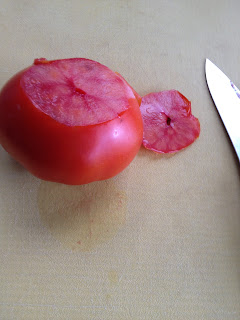 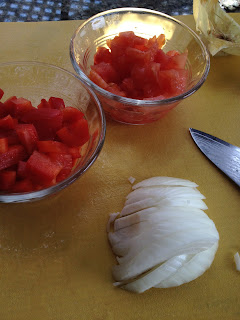 Having both successfully followed the tutorial and kept my fingers intact I made my way through prepping the rest of the ingredients.


I only had a 32 oz. size of chicken broth. I was going to have to find something to do with the rest of it another time.

I decided to swap pine nuts for the pumpkin seed garnish in the Deen recipe but I didn't actually do that this first time out. That doesn't mean I won't try them next time I make this dish. I also decided to add some black beans as a second side.

The chipotle peppers, however, were a a hurdle. I'd thought there were some jalapeños around somewhere. There weren't. It turns out my wife had tossed them after they had gone bad the day before. I would have gladly smoked them myself given the time I'd built in by choosing a quick recipe, but now that wasn't an option.

What to do? I made a beeline for my hot sauce collection in the pantry and grabbed some Chipotle Tabasco for a quick substitution. I didn't get the same flavor I'd have gotten if I'd had fresh or even canned chipotles, but maybe I could boost the sauce's flavor in other ways.

It was then that I'd caught a bit of inspiration out of the corner of my eye. The last of a pot of afternoon coffee might work well with the smokey chipotle and chocolate. I made a mental note to add some while the sauce simmered.

Preheat oven to 350 degrees F.
Heat oil in a saute pan over medium heat. Add onion and saute until translucent. Add garlic and spices and continue to saute to toast and develop flavor. 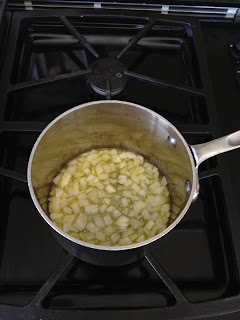 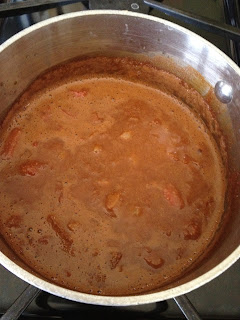 Strain and puree until smooth. 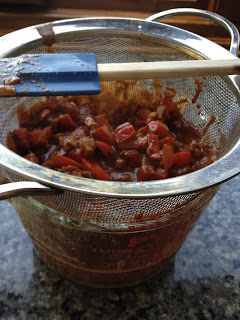 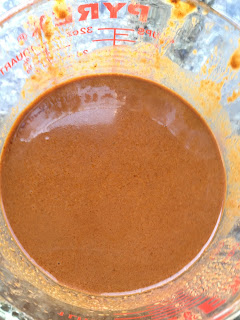 Sear the chicken in a heavy bottomed hot saute pan over medium-high heat until browned on both sides. Add to casserole dish, cover with sauce and braise the oven for 45 minutes to 1 hour. Garnish with pepitas and serve with white rice.
The left over coffee really added to the flavor of the sauce. It only came out to about a quarter cup but I like my coffee strong and the flavor came through. While I would have preferred fresh-made chipotle flavor to the convenience of the hot sauce it still worked quite well by adding a smokey heat to the mole. It wasn't Paula Deen's mole or your mole. It was my mole, made only from what I had on hand, and it was delicious.

Now, what to do with that left over chicken broth? That's another tale.

So, don't freak out if you don't have the exact ingredients to follow a recipe. Don't go running to the store for things that you won't use up making one dish or over a couple of nights. Be creative. Explore your garden, if available, and your cupboards, refrigerator, freezer and pantry as well. Use that green thumb and some of that conspicuous consumption to your culinary advantage. Use recipes as a jumping off point to do your own thing. The people who created the many moles and paprikas' and marinaras and gumbos usually didn't have a recipe to work from and you don't need one either. Practicing cooking on the fly is also a great help when time is tight and you need to produce a great meal with what's on hand.

Don't follow, cook! You'll be better for it and so will your life and your food.