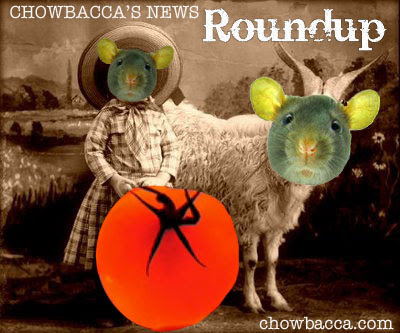 With the big agribusiness "subsidized" 2012 Farm Bill stalled in the House and GMO-loving corporations lining up millions of dollars in opposition to California's Proposition 37 the battle lines of our food's future, organic vs. GMO, are being drawn in piles of green.

Food labels already give us information about things we need to know like the ingredients in our food, its country of origin and whether or not it was grown organically. The ability to distinguish between GMO and non-GMO foods seems like a simple enough request. So why are the corporations creating and distributing genetically modified organisms rallying against Prop 37? If GMO products are truly as harmless as these corporations claim, what's their problem with a little more transparency?

At Chowbacca we feel that GMOs should be labeled so that we the consumers can continue to make informed decisions about the foods that we eat rather than simply handing over our health and our lives to profit-motivated corporations. In that spirit we present News Roundup: The GMO Edition.

Does GMO Corn Really Cause Cancer in Rats?

Who's Deceiving Whom? Prop 37 Has Corps Running Scared

Get Out the Vote: Proposition 37