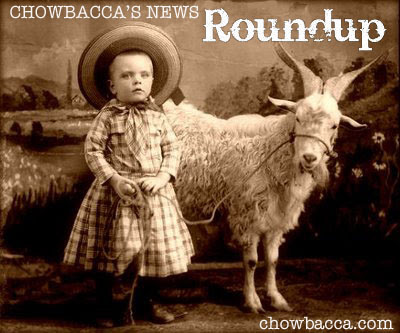 It seems that every day some new study is whipped out across the media tubes to wag a "nannynannybooboo" finger in the face of the studies that came before it. Bacon is good for you. Bacon is bad for you. Black is white. Up is down. And it's really all just a big nothing until the peer review, which it may not even survive. Most of these studies blow away on the dust of the next big hype, never to be heard from again.

Recently, a meta-analysis out of Stanford announced that there was "little evidence of health benefits from organic food". Really? Again? This chestnut has been tossed back and forth in the U.K. since 2007.

Was nutritional value ever really a question? Has anyone but the people doing these studies and a bunch of dumbo newsjocks even suggested it? Personally, I had never believed organic foods to be more nutritious. I just don't want to support companies like Monsanto or get ass cancer from eating the pesticides that "ordinary" (increasingly GMO) foods are bathed in. Organic foods also look and taste better to me than the uniform, plastic-like food products engineered by big agribusiness.

And exactly how would using alternative pest control and growing methods increase the nutritional quality of a fruit or vegetable? Who's funding these studies and analyses and how can I get in on some of that easy research money?

Unsatisfied with the non-issue of another "our food is just as good as your food, nannynannybooboo" report, yet another study was recently embraced by the low-self-esteemed as evidence that those of us who prefer to eat organic foods are "jerks". Nice.

Well, if it'll help change your minds about us, folks I ... oh, on second thought, fuck off, you insecure pesticide bags.

Now, here's the roundup. And I don't mean Roundup.

Organic Food Isn't More Nutritious But That Isn't the Point

Initial Reflections on The Annals of Internal Medicine Paper

Organic Food Might Not Be More Nutritious, but You Should Eat It Anyway

Challenging the 'Conventional' Wisdom: One Farmer's Take on the Stanford Organic Food Study

Does Organic Food Make You a Jerk?