The Sun Also Rises... Coffee in the Mission

It might not seem like it in most of the country - many places still experiencing drought and record high temperatures. In San Francisco alone, the weather has been surprisingly warm; I've been able to sleep with my window open without freezing to death in the chill of the cold San Francisco summer night, I've been able to get around in the city without the extra hoodie (the point I'm hammering home: San Francisco is cold during the summer).

But I realized when I was finishing my iced coffee with the sun beaming down 24th Street that there would come a time soon when at 8AM it would be barely light out, and I knew I'd have to get my morning caffeine routine nailed down; in the winter, I am, like many of my mammalian cousins, wont to hibernate.

Yet, I love the season of whiskey toddies, mulled wine, pumpkin pie, Halloween, Calvin and Hobbes-colored stretches of forest and burning leaves. I love all that, but not in the morning. 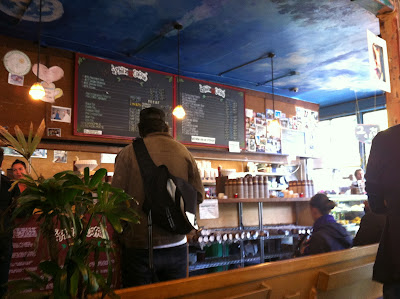 "I saw you at the bus stop this morning," said one of the young cooks that frequents The Unresolved Love Life of Evelyn Lee* (or "Sadie's" for short).

"Oh yeah?," I had been busted waiting for the corporate shuttle, the same one that Drewes Meats' Josh Epple feels is such a threat to mom & pop businesses in Noe Valley.

"Yeah I take the shuttle," (the jig is up), "every morning almost. Leave the house at 8:25, get my espresso at Bello's on 24th and Harrison then off to the salt mines."

"You should check out Philz," said another local working cook sitting on the other side of me.

Seriously, Sadie's is lousy with cooks - so much so that I'll have to write them up soon. "They were voted the best made-to-order coffee in San Francisco. Virgin America uses their coffee. 24th and Folsom."

(* Yes, Oliver, your day in the sunlight of the blog-o-dome is coming soon.) 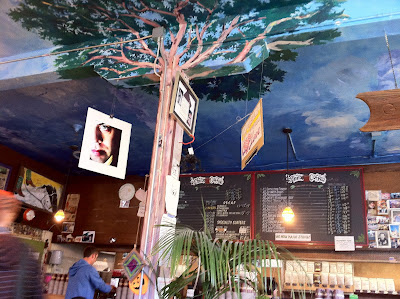 12 sleepless hours later, and time to get in gear. Rise and grind, as they say.

Bypassing Bello's, I approach the intersection of 24th and Folsom. There on the southeast corner, is Philz Coffee & Tea, a line of young urban professionals and local working stiffs poking out the front door. Bike racks, sign posts and parking meters are adorned with be-stickered bicycles... I consider myself lucky to find bike parking as easily as I do.

Inside, the theme is tropical: wide waxy-leafed potted plants give the feel of an indoor jungle, a theme which is repeated in the painted walls and ceilings (flashback: Coventry Arabica in Cleveland Heights in the 1990s).

20- and 30-something baristas wrangle the line with surprising efficiency as I stare, confused, at the dizzying menu selection of made-to-order coffee. The line moves quickly in spite of the fact that every drink, even the iced drinks, are made to order. 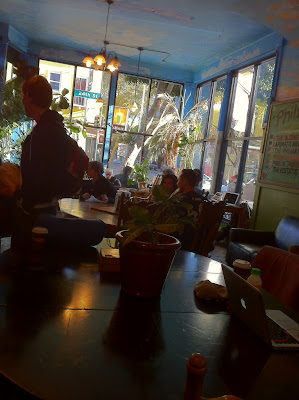 "How's the coffee?" A friend from the neighborhood spots me.

"You know, I wanted not to like it because this place is dripping with hipsterisms, but it's great," I confess. "You know, come to think of it, the coffee shop is the original habitat of the hipster."

"Yeah, I guess that makes sense... weird seeing you on this side of the clock. Usually you have a drink in your hand when I see you," says my friend.

"See you at the bar later!"

"You know, there's a good chance of that," with a parting wave. I sit soaking in the environment, suddenly feeling a caffeinated wave of nostalgia for my many years of being a coffee-shop rat (the hipster of the late 80s and early 90s) before I became a bar rat.

...Before I was an aging hipster.

Philz garnishes their coffee with fresh mint, which I also didn't want to love, but it works.

Philz Coffee is pretty damn good, I'll admit, but it's not going to keep me from the closer and low key Bello Coffee and Tea on Harrison.

I discovered Bello mainly on accident. Harrison narrows down a lane suddenly at 24th street, and this of course slowed my down riding down the street on my bike, long enough to notice the small coffee shop on that corner. 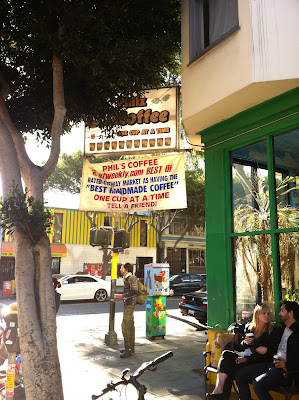 Mise en scene: a tough looking Mexican biker type with a cappuccino and two Pomeranians (one with a pink bow) sit at an outdoor table. Inside, a few professional types order multi-adjective espresso drinks from a sharply dressed barista (the owner, one could presume). A man sits in the middle of the seating area with two net-books plugged into an outlet set in a support column, a stack of DVDs from the library, reading the local socialist weekly and drinking coffee.

In other words: the Mission in a nutshell (what that one could sum the place up so neatly).

The shop is fitted with a roaster, and roasts daily. The menu boasts some items with a few quirky twists: black sesame seed mocha and a frappé that features lavender.

They sell breakfast sandwiches on bagels that look great in the pictures, but I'm often in too much of a hurry so I opt for a double espresso each morning, that I then cool down with a splash of half and half.