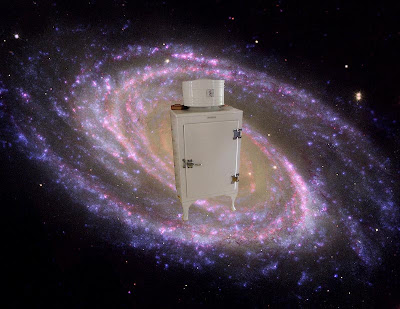 In part one a mysterious stranger in a time-travelling refrigerator treated me to a weekend of revisiting some of the most treasured food moments of my life. At the end we two were hurling in the phantasmagorical Thingamafridge through time and space toward a distant alternate future in which the whole picnic of the Earth had been left to the ants. We rejoin my adventure on our return trip, having just mopped up a colossal Mrs. Butterworth's spill and restoring peace once more to the Planet of the Ants.

"Okay," I said to my mysterious host, "that was weird."

"The ants," he asked, "or the huge bottle of Mrs. Butterworth's?"

"... big? High Fructose Genetically Modified Corn Syrup. Nasty stuff. Enough about that for the moment. I promised you another adventure and this time we're doing a day doing things you've never done. And remember, you can have some interesting dining companions along too if you'd like. Anyone at all from all of time and space. Now, shall we get on with it? Are you ready?"

I'd been considering my choices through the whole strange trip. With all of time and space at my disposal how could I choose? I decided to keep my choices narrowed to the Earth that I knew within a reasonable amount of history and that enabled me to finally start putting a list together. When I'd finished I informed my host of my selections and once more the Thingamafridge roared into action.

Here is the final list that I gave to my host.

Enjoying the sunrise with Sagan would be like tai chi for my waking brain. I'd have at least a billion questions for him.

Sometimes I just want to listen. Listening to these two great men talk about the stars over brunch in a beautiful setting? Paradise.

I loved these two together on their show. What a treat it would be to share such an inventive meal with them as they discussed the food and riffed on each other. The stories they would tell.

Sometimes I want to pick brains and the time to do it in. My two favorite modern directors should each get their own time, setting and mood. I'm sure that music, art and literature might even make it into the conversational mix.

I love baseball. I love sushi. Morimoto played baseball. Morimoto loves baseball and roots for the Japanese players. Morimoto also loves sushi and through an interview introduced me to the idea of eating at Kuyubey. Delillo is a lifelong Yankees fan. I hope Delillo likes sushi. Throw in Ichiro and I'd have a night of baseball talk and inventive sushi genius.

Do I need to add anything here? I don't believe that I do.

I once interviewed Douglas Adams and he was exactly as interesting as you'd think. He also wrote Last Chance to See. The perfect guest for a bit of dessert on a volcano.

Cigar and a Cocktail: 2004 Romeo y Julietta Hermoso No. 2 LE, The Lawn at The Upper House, Hong Kong With Guests "The Summit"

Frank, Dean, Sammy and the rest of the gang swing-a-ding-dingin' with cocktails and great Cuban cigars on a rooftop overlooking Hong Kong. Now that's a cool clam bake, Charley.

I'd have to duck out before the sun rose if I wanted to enjoy a late night snack that didn't come in a glass.


Ending my day relaxing and talking jazz and film scores with two brilliant minds in a beautifully designed space beneath the stars would be just right, I think.

When my day was through and my mind and body satisfied beyond imagining my host had to be on his way. I thanked him for his efforts and hoped that he had learned what he had sought about food and we humans. I also hoped to that our paths would cross again some day.

As he crawled back through the door of the Thingamafridge the ridiculous man in the ridiculous scarf muttered something about having to stop "The Dahlings" again, whatever that meant.