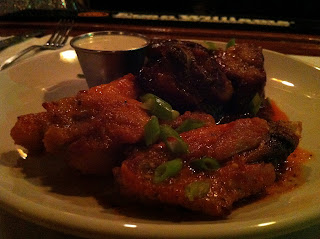 "All of our meat comes from a farm in Sandusky, Ohio. The animals are free range and the cows are grass fed," said Rib Cage general manager Drew Perna, for the 12th time. "The majority of our produce is locally grown, a lot of it comes from the Community Greenhouse Project. Our beers aren't local but they are all small-batch, small-business owner-brewers, except," with a verbal eye-roll, "crowd-pleaser-with-the-kids PBR."

A couple of 30-something neighborhood types ordered ribs: spare ribs and faux "turkey-ribs", smoked turkey breast left on the bone and sliced to mimic ribs.

"I recommend the Carolina sweet mustard BBQ sauce," said Drew. I smiled and gave it a thumbs up, the Carolina sauce is indeed good - and I'm less biased than Drew. It's his recipe.

The Rib Cage, now entering their second month of operation, inhabits the Cleveland Heights, Ohio space that was the original Chuck's Diner - a space with a lot of history for those of us who dwelled in the area. Chuck's Diner was a brightly lit all-night cafe that at night hosted scores of listless teens; often looking to either get into trouble or hide from it.

In the mornings the teens would disperse as the AA crowd would come in and out throughout the day. The food was a sort of prison/Army grade fare slopped on a plate and eaten with grimness or eagerness depending on the sobriety of the recipient. The "coffee" was chicory.

A coating of wood and leather-toned paint and the space feels cozier than its former brightly lit self despite the floor-plan remaining the same for decades.

A pair of steer horns and a replica rifle over the bar is a nod toward the "real Texas BBQ" Perna and assistant manager Steve Salem are striving to reproduce in Northeastern Ohio. Restauranteurs Mr and Mrs Robert Hill Jr and Robert Hill III have been doing business in the Lee/Taylor area of Cleveland Heights and University Heights for multiple generations.

"There are really only two other places, neither of them are in Cleveland, that do a true 15 hour smoke," explains Perna. I run through the list of famous Cleveland BBQ (chain and otherwise) in my head - not Hot Sauce Williams, not Tick-Tock Tavern, not the Winking Lizard, not Gepettos and forget Tony Roma's or Applebees.

"Blazin' Bills in Burton and Fat Casual in Macedonia," said Perna. I mentally added those to my to-eat list. 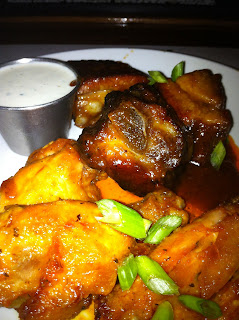 I was flanked by a couple of old friends when we saddled up to the bar for food recently. I ordered an off-menu sampler of appetizers: wings and rib tips. My friends got ribs, Carolina sauce, garlicky and smoky greens and sweet, hot and smoky baked Ohio beans. A plate of fried green tomatoes were shared.

The smoked meat was succulent and had the tell-tale pink smoke ring - the sign of true smoked BBQ. "In Cleveland BBQ is conflated with grilling," offered Perna, "which is fine, that's vernacular, but when I say BBQ I mean slow smoked Texas style."

The wings, a good size and juicy, were prepared with a spicy herb buffalo sauce with home-made blue cheese dressing (all the dressings and sauces are made from scratch... "everything is made from scratch," Perna).

We tucked in as Perna zipped off to serve a pair of couples who had wandered in.

For the 20th time, I recited his spiel along with him inside my head.

"So I gotta ask," chatting up Perna during a slow point in the evening, "if it's Texas BBQ, why the Carolina sauce?"

"Because this is Cleveland, where you can do anything with food! You can put chili on spaghetti!" replied Perna mockingly.

He means Cincinnati, obviously, but this is a town where the native "BBQ" is the radioactive Red No. 5 pink stuff available at Hot Sauce Williams; a garlicky, Karo-syrup concoction probably loved only by natives.

As far as rule-bending, do-it-yourself kind of cuisine goes, one only has to look to native Clevelander and former Geppetto's pizza tosser Michael Symon, the famed purveyor of chocolate and banana dessert perogies and the man who, for better or worse, put bacon ice cream on the map.

As a sub-genre of cuisine that seems to have so many rules in its canon (and many "best in the worlds"), BBQ is a varied and splendid American cuisine that traces its origins from the conflagration of the African slave trade (offal and cheap cuts slow cooked in spices), the First Nations (smoking and curing meats) the Caribbean (where we eventually get the name itself - barbacoa - and the use of fruits, sweet sauces for savory preparations).

Drew Perna, along with Steve Salem and the Hills, can get away with calling their BBQ Texas because they are among an élite few who actually slow smoke a variety of meats - the signature of Texas BBQ. Brisket, whole chickens, turkey, sausages are all part and parcel - but most especially beef brisket.

Carolina BBQ is almost exclusively pork - lean or not - in the North it's smoked and shredded with a tart, watery vinegar sauce with peppers; South Carolina boasts a sweet mustard sauce like Perna's - but only for pork. In both Carolinas, the hog is king.

St Louis has its own style of smoked pork rib, the famous cut that Perna prefers to eschew ("you lose all that wonderful connective tissue when you chop off the ends!"), but the Rib Cage serves a version just the same.

Bend the rules all you want if you are making food with care and love. You may not call it Texas, Carolina or St Louis BBQ, but I call it delicious.