Can't Taste, Can't Smell, What Can You Do?

"Here, you'll need this," said AGF with a giggle as she handed me a remarkably phallic rhizome.

I looked at it quizzically. "Turmeric?"

The turmeric has long been used as an expectorant (it is claimed to have antiseptic properties, which is not how I plan on using it, and contains a compound, "curcumin", that is being studied intently for possible use in some cancer and arthritis treatments).

It tastes like it smells - like dirt. Like bitter medicinal dirt. I make a tea out of it with fresh ginger and the (probably not so sensitively named) "Gypsy Cold Care" tea AGF brings me from Safeway.

"And I got the noodles!"

There, as I requested, a $1 bag of noodles. Some apples, oranges, eggs and English muffins.

I guess when I am sick I want pretty bland food. 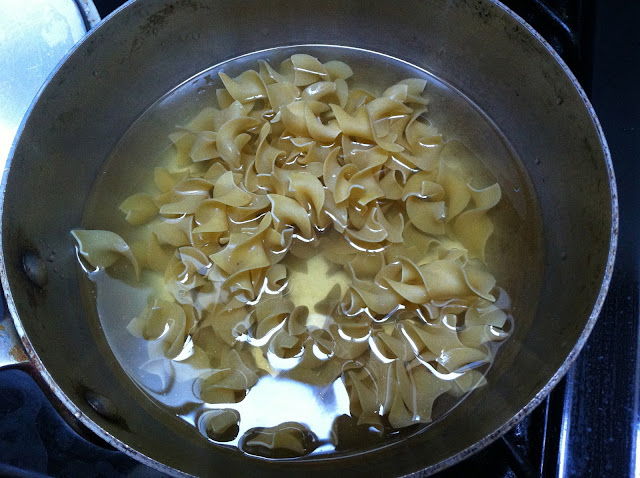 Spent most of the rest of Saturday in bed.

Most of Friday I spent having lucid dreams. Fever dreams. Dreams about being yelled at by celebrity chefs.

I knew I was really in trouble when Mario Batali scolded me in the galley of an impossibly large Boeing 747 en route to Narita for my sloppy knife work.

"And trim your beard!"

I was spinning dough to bake pies in an improbable wood fired oven - which seemed like a bad idea 39,000 feet aloft. In the belly of the plane Public Image Ltd was filming a new video in our charcuterie "cave".

Batali was not pleased at this: "fucking cost cutting goddamn United Airlines..."*

Even in dreams, Batali is a figure who looms large. And why am I always flying to Japan?

Friday night I called AGF - our planned movie night was off, I was too sick.

Forget hiding the bodies, a true friend will take you to Safeway when you are sick. 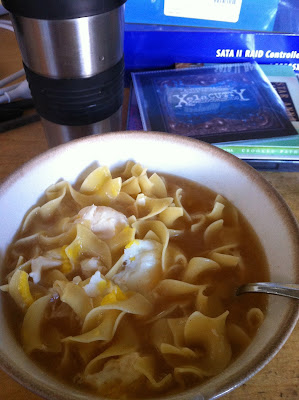 A little more ambulatory. I don't know if it was the broth, the turmeric, neither of them or both.

Fall Fever Broth and Noodles:
Boil broth, water and noodles for about 7-8 minutes until noodles are al dente, then lower heat and add egg to poach for 2-3 minutes, lid on.

Transfer to a serving bowl and add garnish of cheese, hot sauce and herbs.

Put your face over the bowl and breathe in deeply. Sip some tea.