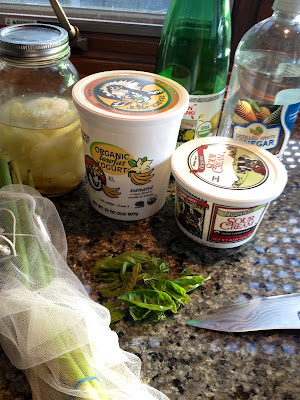 My wife had picked up some ground lamb. It was my night on the grill and the last minute so I had to get creative quickly. I suppose that I could have just grilled the bugers with a little seasoning and been done, but where's the fun? Instead I decided to try a "gyro on a bun" using only ingredients already available in the house. Unlike my mole chicken dinner, this meal offered only a handful of challenges but it did give me another opportunity to test my ability to improvise under fire.

The first challenge was the tzatziki sauce. I only knew that I wanted to make the sauce first so that it had time for the flavors to get together. I'd had a rough idea of what was involved in tzatziki but I was going to need to consult the Intert00bz for more info. Alton Brown offered this:

It was a fine recipe but it involved suspending the yogurt over a goat for two hours or some such business. I didn't have time. What I did have was my jumping off point and so off I went to scanning the pantry and refrigerator.

Fortunately, there were some home made Hungarian leavened pickles, or kovászos uborka, in the fridge. The pickles are brined and seasoned with garlic and dill without the use of vinegar. They are great in the summertime and I felt they would work well in my sauce. They also eliminated the need for   prepping cucumbers as well as the need for any additional salt and garlic. If someone hadn't been wonderful enough to make this treat I supposed that I would have used vinegar pickles and left any additional vinegar out of the recipe.

Next I needed to find some yogurt. My wife usually has some made but we were out at the time. There was yogurt, but it wasn't Greek-style. It was the low fat vanilla stuff that my daughter enjoys and it was going to have to do. I also found some sour cream and lemon juice to help tone down the vanilla flavor from the yogurt. The garden provided some fresh mint and also some fresh basil, which I'd thought might be a nice addition to Brown's basic recipe. I found some scallions in the fridge. Having run out of red wine vinegar the night before I opted for white vinegar.

A little chopping and mixing later and I was putting a half-cup of tzatziki in the fridge to meld and cool. I diced the pickles and scallions finely. My resulting sauce was thinner than traditionally prepared tzatziki and was closer to an Ottoman cacık if you want to get technical but whatever you might call this variety, it would work well as a burger sauce. I'll just stick with tzatziki.

I had started with a quarter cup of the yogurt and just added the rest of the ingredients until it tasted right. I  probably used a quarter cup of sauce on the burgers that night and I used the other quarter the next day at lunch on some cucumber sandwiches.

My sauce prepared, I'd needed to season the lamb burgers for the grill. 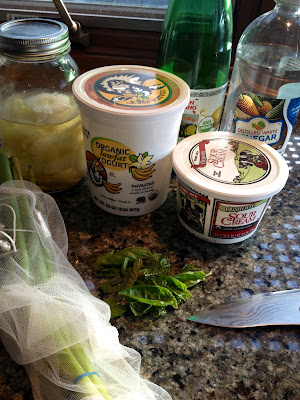 Since I was going to be saucing the burgers up I decided to keep the seasoning simple: Salt, black pepper, nutmeg, cardamom and tumeric. I mixed them together, (don't ask me for measurements, I usually cook by taste and smell), and then coated the outside of the burger patties like I coat my spice-crusted lamb chops. 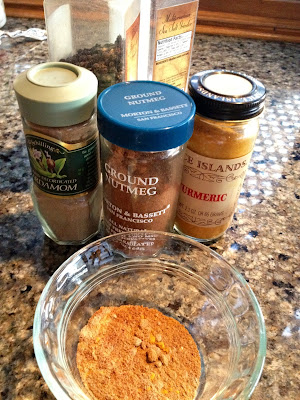 Remember to treat lamb as you would beef. You'll want to grill it high and hot to your desired doneness so that you get a nice crust on the outside without overcooking the inside, but in this case be careful to back off on the fire just a bit as the spices will blacken quickly or even burst into flames. In the end you should have juicy burgers with a dark, spicy crust ready for a brioche bun and some of that good sauce. 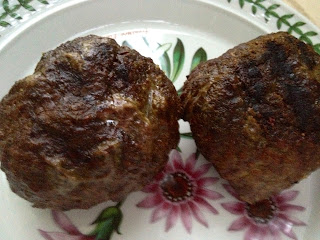 The results? You wouldn't be reading this if they weren't delicious. The tzatziki sauce was even better the next day.

Recipes are nice, but do your own thing. You'll save time and money as well as having more fun and learning a thing or two while making your meals. Don't follow, cook!