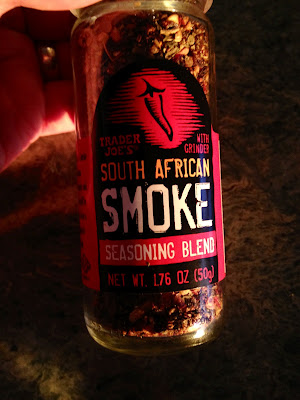 Ever wanted to "knock it up a notch" with a blast from your "spice weasel"?

Well, now you can if you were savvy enough to drop $2.99 on Trader Joe's South African Smoke Seasoning Grinder or if you can still find one available. Alternately, you can always duplicate the ingredients into your own spice grinder and *BAM* away.

The label promises umami and the contents deliver. Consisting of paprika flakes, (smoked would be my guess though it doesn't specify), sea salt, garlic and basil this stuff has been a hit around my house. The first testing was a tweak I came up with for the Mexican street food favorite, elote.

Here's a pretty standard recipe from Homesick Texan via Saveur:

Like every other recipe I've seen for elote the Homesick Texan suggests adding the butter and mayo* after the corn is baked, boiled, or grilled. I was set on grilling and my wife had the thought to blend the butter, mayo, and seasoning before grilling and to slather the corn inside the husk and to then foil it husk on and grill it. Brilliant.

We also considered subbing Parmesan as the Texan was suggestin', but instead we opted out on the cheese, lime, and Cayenne altogether. It was a winner with our spicy peanut sauce chicken dinner**. Just grill your corn 7-10-ish minutes until a few kernels blacken and serve. *BAM*

Tonight we took one of the few recipes we do follow, because it's such a simple recipe for roasted Brussels sprouts, and made it smokey with a blast from the Umami Weasel too. Recipe breaking victory noise was heard all around the table.