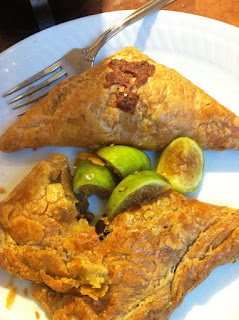 How would you like to see this (pictured, left) on your plate in the morning? Yes, please?

Okay, since you asked nicely and all I'll let you in the the not very secret San Francisco Mission treasure that is La Victoria Bakery.

La Victoria is located en la corazón de la misión at Alabama and 24th, a few blocks from where this pilgrim first hung his hat 17 years ago in a converted pantry with a concrete floor.

Vibrant and colorful are overused adjectives describing the neighborhood (as are "ethnic", "sketchy", "hipster", "douchey", "blighted", "charming" and the whole gamut of non-sense words used by hacks in disservice to the Mission).

24th street runs east-west. A block from Alabama is tree -lined and biker friendly Folsom. Faux-Victorian facades adorn the majority of residential buildings, which almost always attach to their neighbors. Mural art, sponsored and preserved by the neighborhood, adorns the sides of buildings all along 24th street, as well as along Clarion Alley between 17th and 18th Streets further north. 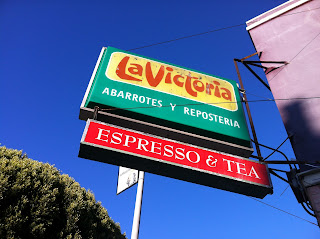 The neighborhood is defined roughly by SF General Hospital to the East, Mission-Dolores Park to the West, Division to the North and Bernal Hill to the South. It is one of the cities largest valleys, with a 2008 population of just under 50,000 people (one of which is yours truly, even though I purport to live in Potrero Hill, technically I am west of the US 101, the Mission's official eastern border).

The first thing I noticed when I settled near 24th and Folsom in the late 1990s was the bombardment of smells, mostly pleasing. I imagine this must be almost overwhelming for the district's tens of thousands of canine residents. 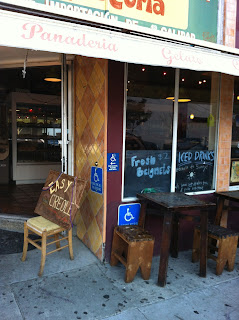 The cuisine is largely Latin so the odor palette is stewed pork and chicken, chile peppers, epazote, cumin, cilantro and lime and the constant charring of carne asado and pollo asado. However, the neighborhood is nothing is not multi-chromatic. Punctuating Latin flavors and smells are plentiful coffee shops, Indian and Chinese food and dozens of bakeries, of which La Victoria is one of the neighborhood's best known and long-standing.

I have long been a fan of La Victoria's empanadas. I am not expert enough to place the origin, but consulting some locals we agreed that they are likely either Chilean (in that they are baked and often feature raisins, minced meat and nuts) or Brazillian "pastel" (similar flaky crust and fillings).

I tried quizzing the woman behind the counter, who did not know either, but was proud to report that she herself was Mexican (I did not inquire from which region - which would be beside the point since Mexican empanadas are smaller and almost always deep fried).

According to a few sources online (my own knowledge of food history dovetails with this theory), the empanada is a mutation of the Middle-Eastern, Central Asian samosa. If so, the dish has traveled far and wide - an Indian restaurant serves a dish with the same origin as a Mexican bakery across the street.

So, eschewing "colorful" and "vibrant" and other well-worn cliches for the Mission, I think that the empanada, in its myriad forms, is as good a metaphor for the neighborhood: a lot Latin, maybe a little Middle-Eastern, a touch Indian, a smidge Chinese, a fair amount European, a bit African and so on.

Speaking of African, I first heard La Victoria was hosting "pop-ups" when my co-worker urged me to get there "the third Thursday of the month" for a pop-up Jewish deli. (I'm being obtuse, hang in there). 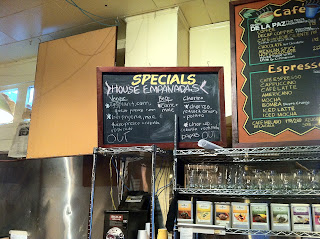 I'm not sure what came of that, and I missed it (which I truly regret, as it is nearly impossible to find a decent bagel in the Mission), but there is a recurring Creole* pop-up called Easy Creole that inhabits the space and a few other bakeries around the city.

I haven't tried it, but I'm a fan of the cuisine, so maybe we'll bump into one another sometime down the road, Mission neighbors!

* Creole being of Afro-Caribbean-French origin. 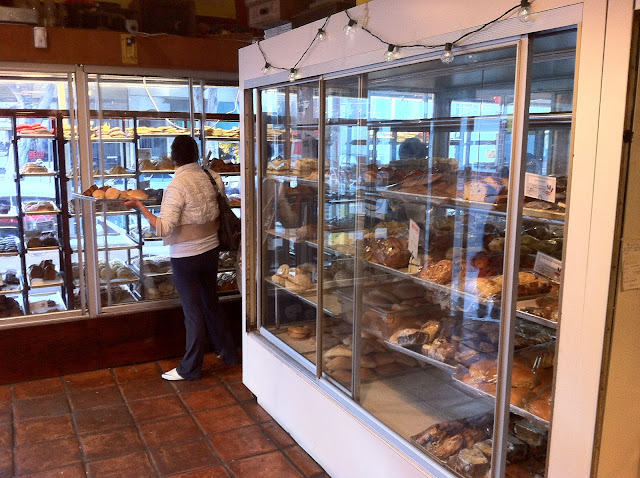