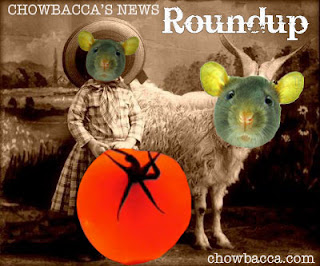 The battleground for our food future is here and now in California.  In November we Californians will have a chance to cast our vote on an informed future regarding our health and the safety of the foods that we eat. Are you ready? Are you informed? There is a lot of misinformation being presented as the vote grows near. Chowbacca would like to help shed a little light through the anti-labeling smoke screen.

You may have already read of the latest attempt at slight-of-hand by the group opposing GMO labeling in which Henry I. Miller of the conservative think tank The Hoover Institution presented himself as a concerned Stanford scientist against GMO labeling without ever having consulted the university for permission or endorsement. The ad has since been pulled at the university's request and is being edited for future re-airing.

What's the harm in a little cosplay? Plenty, when the subject is our food and the person playing pretend is a paid consultant of companies promoting cigarettes and DDT. In addition to making misleading ads, Miller co-wrote this pack of "low-tar" for Forbes with fellow cigarette shill Gregory Conko of another conservative think tank, the Competitive Enterprise Institute. Their point in the Forbes piece is that labeling GMO foods will produce a stigma against these foods that would be unfair.

These are the kinds of tactics and tacticians that the anti-GMO labeling forces are bringing to the table. They are using these tactics ... well, because cigarettes are still successfully killing people each day thanks in no small part to the efforts of men like Henry I. Miller.

Frankly, Monsanto, DuPont, Kellogg's, and Coke, when your best pals include pushers of cigarettes, DDT, and Agent Orange your ethics and concern for the public good may seem a bit questionable.

What, as I have asked before, is the harm in some transparency regarding GMO food and crops? Why are these companies spending millions fighting the mere identification of products that they claim to be safe? Why are these same companies instead funding studies that attempt to discredit organic foods?

The first genetically modified plant, interestingly, an antibiotic-resistant tobacco plant, was introduced in 1985. Why, in all of that time, have none of these companies put a penny toward any study that would back up their claims that GMO foods are safe? Why have they, in fact, blocked attempts by third party researchers to study their claims of GMO food safety?

Because they only care about their bottom line and lies are cheaper to manufacture than facts.

Henry Miller, Monsanto, and their pals will tell you that GMO crops are safe and yet there is no research showing this to be true. We only have the word of cigarette defenders and the faceless corporations that pay them. They will also tell you that GMO crops reduce pesticide use. GMO crops have been shown to increase, not reduce, pesticide use. Conveniently for Monsanto, they not only sell GMO crops, but pesticides too. It's funny how that happened, isn't it? It's almost as if Monsanto had engineered it that way.

With further study and some transparency, who knows what else we might learn about the things lurking beneath the bottom line of these engineered food crops?

It comes down to a rather simple question, California: Do you trust your own judgement based on a clear picture of what is going into your body or do you trust the baseless statements of faceless, profit-motivated corporations?

The time is coming to answer that question. The rest of the country will be watching our lead.