Congratulations, Arby's, on your re-imagined makeover from a throwback curly-fries-and-shoe-leather-on-a-bun slinging fast food chain to a sleek, modern national neighborhood sandwich shop chain. May I call your moves "slicing edge"?

I have, however, noticed some little problems with your campaign and I think that it would be rude of me to let you go on without mentioning them. 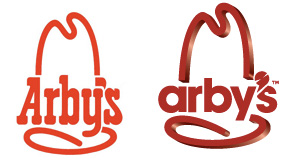 The next time you redesign your logo you may want to consider hiring a designer from outside of the family. I'm sure that your wife's brother Ritchie needed the work, and those pancake breakfast flyers he made for the Lion's Club a while back were eye-catching and all, but should he be "going national" without having had a single art or design class?

I'm certain that he meant well, but I'm not sure that Ritchie's vision to take your classic cowboy hat logo and rocket it forward to 2007 was a good one. Is there some sort of "hipster irony" I'm missing in his Microsoft Wordart approach? I know that a lot of designers are certainly missing whatever bold statement he might be making. Please, if there is something that you and Ritchie's sister saw when he proposed this 3D, sans-serif monstrosity can you share it with the rest of us?

On a positive note, Ritchie has made the old logo look good by comparison. Was he going for some kind of "New Coke" thing? If so, bravo. I'll eagerly await the re-re-launch-imagining.

I don't mean to be a picker of knits, but I have to question your choice here. While I'm sure that ... what's his name? Harry Bedsore? Ah, yes, I remember now. Well, I'm sure that Mr. Bo Dietl is a wonderful human being, but nothing says "appetite suppressant" like a sweaty, sand-gargling Ewok.

Either way, as delicious and fresh as your new turkey sandwiches may be, I, for one, may never eat again. At the very least I will forever associate Arby's sandwiches with excessive body hair and perspiration.  The only image that could possibly have been more traumatic would have been a shot of the bedsore Ewok eating. Thank you for not showing him eating. Sincerely, thank you.

I'm no advertising genius, but I have an idea. If your goal is to be a sandwich shop, maybe your commercials should feature fewer shots of airplanes, bedsore Ewoks, and Iowa factories? Maybe you could include more sandwich shop shots? How about some shots of a meat slicer in action? I understand your dislike of Subway may be clouding your vision but seriously, these commercials are a "long walk" to make a point.

And all you've accomplished, other than making me lose my appetite, is to piss off Iowa, a state that didn't have a pulse until Bo Dietl started sweating all over its deli meat industry.

"Slicing Up Freshness" ... hm. Why not "Stabbing Up Flavor" or "Shooting Taste in the Face"? Are you able to talk about how Subway's "Eat Fresh" slogan makes you feel? I think that you might have some real rage issues here.

Honestly, Arby's, I'm starting to have issues too. You're already known as a shop that makes "finger sandwiches" and frankly this whole campaign is starting to remind me of Satriale's on The Sopranos. And we all remember what happened at that "local sandwich shop".

Please get some help, Arby's, before you do something else you'll regret.

Oh, and if you're looking for a new crappy logo, we'll sell you the one at the top of this post, cheap! We're slicing up logos over here!