The Collectible Face of Evil


It's almost Halloween, so here's our favorite pumpkin to start the celebration. She gets you coming and going as she sells you the disease and the cure, but does collecting Paula Deen cake magazines qualify you to appear on Hoarders, or Hoarding: Buried Alive? Probably. That cake looks good, though, and I suppose that if the last thing I saw in this world was a glossy picture of a cake as a stack of magazines pushed the final burbling wheeze of air from my lungs through a puncture made by a broken rib fragment that it might at least be a better death than many other publications I could hoard might offer. Are you listening, New Yorker?

People often speculate on the worst way to die. Fire and drowning often make the top five worst deaths but I'd like to propose that a deep-fried stuffing-on-a-stick induced heart failure that left you flopping in rancid butter and cat dung as Paula Deen's leering Jerk-O-Lantern face peers down from a wavering stack of magazines while a scraggly pack of felines greedily await the juicy pop of your soon-to-be-available eyeballs might be the worst fate of all. Are you listening, reality television?

Now, where the hell are my cats? 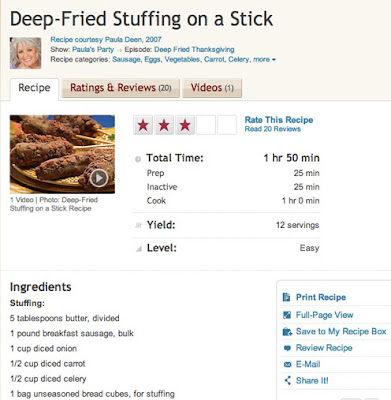