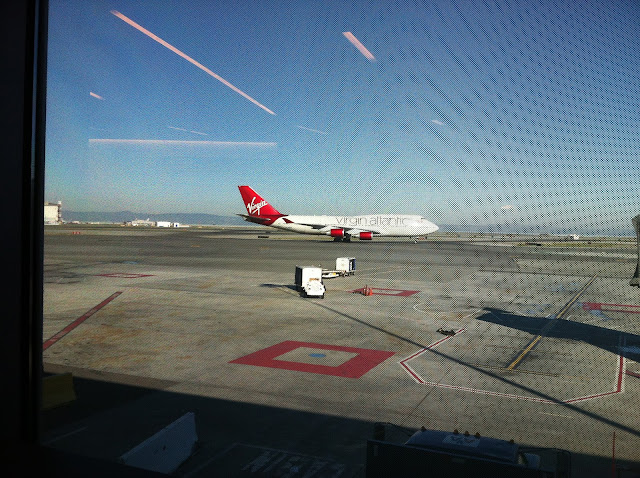 An airport for a major American city near the Pacific Ocean... a major, major transportation hub in and out of Japan, Southeast Asia, the Middle East and Europe, should have fresher shrimp at their signature bar and restaurant in their signature, modern, state of the art Terminal 2.

The Cobb Salad was a bargain at less than half the price ($11, plus $5 for shrimp - coming in at $1.25 per). Still a better deal than the wallet-busting $16 per half dozen oysters (which I begged off, at that price). 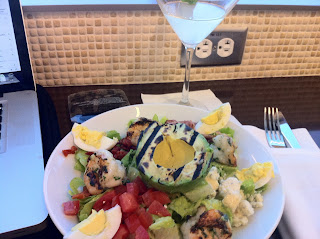 The Cobb salad comes with a half of an avocado, grilled. It needed adornment: sea salt, extra-virgin. Similarly, the quartered boiled egg felt naked.

And let's be clear: Cobb salads are dressed with blue cheese or ranch. I will accept grilled Serrano ham, avocados (really, California?) and shrimp (not to belabor the point, but the fact that an airport that is ON THE WATER can't serve me a good shrimp is really disappointing).

The upside was that the variation on a Moscow Mule, which has the perplexing nom-du-Cat of "The Big O", was stiff enough to make me almost forget it's $14 price tag. 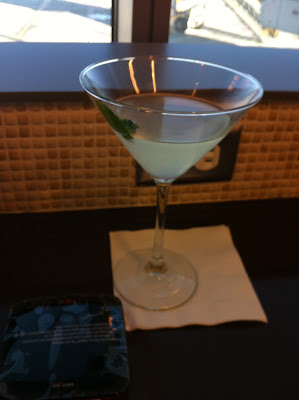 No water was ever dropped and my silverware arrived after my salad was dropped.

Still, the service was a bit glacial.

I wanted to like your restaurant more, Cat, really I truly did.

You have had a rough run on Iron Chef America, and while yours is a successful and popular "destination" within shining, gleaming Terminal 2, I feel I could have had a better bang for my buck had I decided to eat on the plane (Virgin America, the only game in town for in-flight service and snacks).

Then again, Cat Cora's helped me get over sticker shock in Manhattan.