All the Angels Want To Wear My Orange Clogs 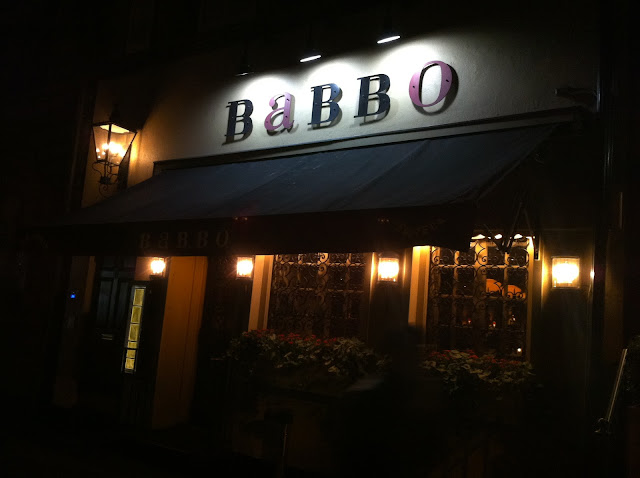 I'm not sure why I'm drawn to making so many Elvis Costello puns lately, but if you haven't seen "200 Cigarettes" you should rush out to, uh, your computer and rent it today!

That is the New York that I think a lot of young people fall in love with, a mix of metropolitan sophistication and punk rock, do-it-yourself grit. Where Lou Reed meets Liza Minelli, and you pass Elvis Costello on your 6th floor walk-up in the Lower East Side.

I wonder if that's the New York that owners Joe Bastianich and chef Mario Batali fell in love with when they decided to buy the building on 110 Waverly Place in Greenwich Village, a late 19th century hitching post and stable for commuters (the upstairs dining room was the hay store). That building became their restaurant, Babbo, which opened in 1998.

The waiter could barely get the words "would you like to start off with a drink tonight?" out before I interrupted: "I'll do a negroni, please!"

The drink was clearly constructed by a master bartender, and heaven is in the details. The drink is served over hand-cracked ice, as it should be, in a heavy lead crystal whiskey tumbler. You can tell by looking at the drink that the amaro used is not your standard day-glo red Campari but a richer, darker and assuredly more expensive variation.

This was poured in first, and it settled into a dark pool at the bottom of the glass, the liquor's specific gravity higher than the other two components, in order, sweet vermouth and gin.

The gin was a good quality, possibly Nolet's but at the very least Tanqueray Number Ten.

Before finishing, the head sommelier, Alec Steidl, had sent up a bottle matching our parameters given the items ordered and our budget (I am not, despite rumors to the contrary, made of money).

This part of the magic that makes restauranteurs like Batali and Bastianich successful: they elevate the profane to the profound, the pedestrian to art on a plate. To the uninitiated it's sorcery, for the hacks it is slight of hand, and for a master like Batali it is second-nature.

The beef cheek ravioli with squab liver and black truffle brown-butter sauce is an example. If it isn't the best ravioli in New York it's definitely the best I've had in some time. Nutty, beefy, with melting, unctuous liver and savory, woody truffles. The pasta was light but with enough backbone to let you know it was there and it wasn't going to give up without a fight. A dusting of pecorino rounded the pasta out.

We also started with a salad of radicchio and portabella in a chestnut flour crepe, the neci con funghi, which was excellent. In addition to that, a plate of spaghetti with a one-pound lobster tail and a slightly spicy, deep red and orange sauce of tomatoes whose retail value I don't even want to contemplate (certainly on par with our gold-plated, diamond crusted $5.99/lbs beauties in California).

Tripe, braised in tomato sauce served with garlicky crostini was greedily consumed mostly by yours truly, lover of all things offal. The menu features a number of items for the adventurous eater, and if I was, in fact, made of money, I would go back every night of the week until I had eaten them all. Then come back the next week for a whole new menu.

The only thing I wasn't embarrassingly in love with was the duck entrée, a smoked, grilled breast with a confit leg of duck had two flaws: the breast was a touch over-done and the dish could have used more cherries compote to balance the richness. Two exes in a sea of checks marks.

Italians have made enormous myriad contributions to the canon of Western culinary arts and their love of sweets should be highlighted: we had an apple tart with creamy vanilla gelatto and a semi-freddi of pistachio custard surrounded by a hardened shell of semi-sweet chocolate.

"I'm from San Francisco, so get me an Amaro of some sort that isn't Fernet Branca or Fernet Menthe," I asked our on-top-of-things waiter.

Returning shortly, he placed an aperatif glass in front of me: "Amaro Sibilla, made in the city of Pievebovigliana."

Lighter in color that Fernet Branca, it went down smoother, with a smokey finish and a hint of something sweet.

"How would you like to see the wine cellar?"

I had nothing clever to say. Yes. Yes I would like to see the wine cellar. 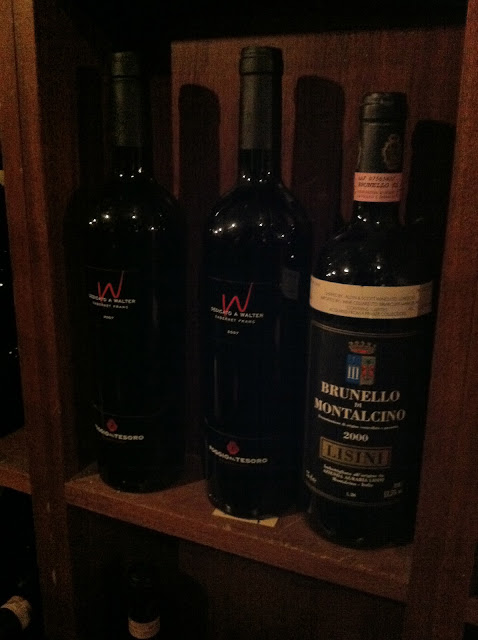 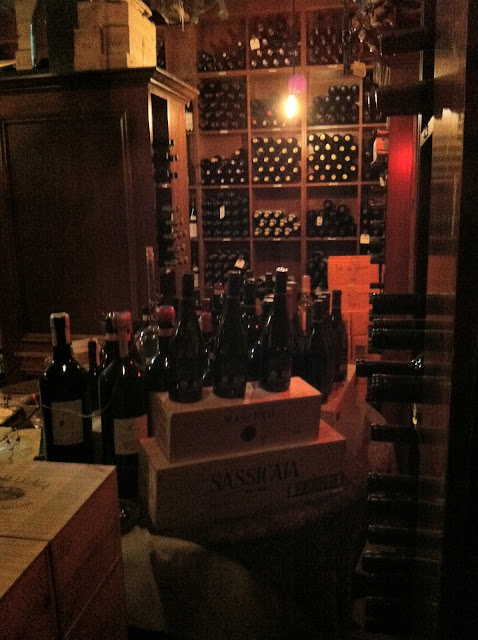 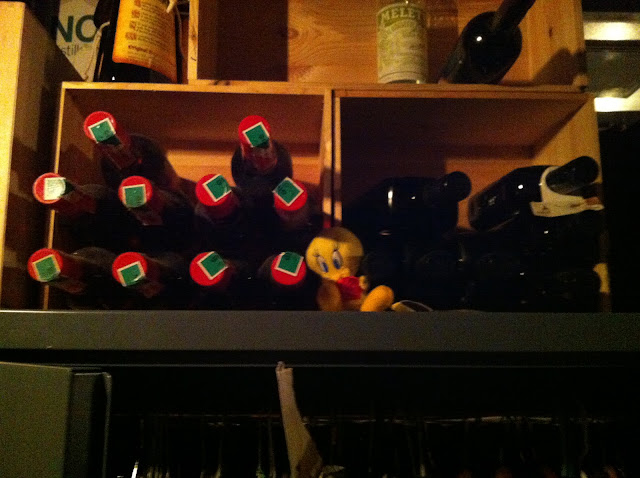 "So is the chef in often, what with being a big TV star and flying around everywhere these days?"

"Oh, he's in all the time. He was in tonight, in fact. I think he walked right past where you were sitting," said Alec.