New Amsterdam it's become much too much,
Till I have the possession of everything she touches,
Until I step on the breaks and get out of her clutches,
Do I speak double-Dutch to a real double-duchess.

Glittering greatest city in the world. Rat infested hell hole. The intersection of all the world's cultures. Playground of the profane, élite and unhindered wealthy. The Big Apple, the City that Never Sleeps. We hear they even make a picante sauce right over here in New York City.

She is a lot of things to a lot of people, and for the next week, she is my home (and office).

The day I became a proverbial man and no longer a boy, behind the wheel, was the day I found myself in Midtown traffic on Broadway surrounded by 2000 taxicabs shifting lanes at will. It was some time in the late summer of 1996.

It was my Neo moment: I closed my eyes (okay, not really) and saw the openings before they were created, or created my own fissures with the power of my mind and the insistence of my red Saab 900S.

From that moment on, I knew that I could take that town or any other town, any day.

Since then I have returned to the Big Apple a dozen times, sometimes staying for a few days, sometimes for a couple weeks.

I ride the Metro with the natives now. Driving in Manhattan is a young man's game.

I take the subway with the natives, I drink with the natives (some of my favorite bartenders in the world are all alumni of the long-lost, much loved Bellevue Bar on 40th and 9th Ave) and I'll be damned if I pay tourist prices for a place to rest me head.

So with some trepidation ("shared bathrooms", "bunk beds available") I took the plunge and booked 4 nights at the Bowery House, just blocks away from the famous Ballroom of the same name.

For a private "cabin" the average price is about $75 a night. Compare that to the next-lowest room rates easily topping $150 a night for motor-lodge style digs (upwards of $200 a night for the Hotel Pennsylvania, infamous home of Hackers on Planet Earth - HOPE - a run-down shit-hole of a hotel).

A "decent" room in New York at a well rated hotel would cost me upwards of $250 a night. That's money better spent on sushi and cocktails.

There has been a flat-rate from JFK to anywhere in Manhattan for a while now.

Currently that rate is $52. This discourages the cab drivers from taking tourists on expensive tours of indirect routes to their destination. Considering you can ask three cabbies for directions to the same destination and get five different answers - honest answers - it clears up any possible confusion and the arguments that confusion may spawn.

Landing at JFK at nearly midnight, half tipsy from the flight and exhausted, I made my way to Chinatown via taxi.

A young "bellhop" was at the door. He pointed me up three flights of stairs to where the receptionist, a young lady, waited.

Behind me was a large lounge with low wooden tables and antique, over-sized leather couches. A young man with a laptop watched NBA replays on ESPN on a large flat screen TV in the lounge.

"Here are the basic rules: no loud music or conversation, no smoking, no outside food or drink in the cabins, and all guests in the sleeping areas must be registered."

Go it, no smoking in bed with a hooker while drinking gin and eating pizza.

"You mean the smoking lounge?"

Another flight of stairs. 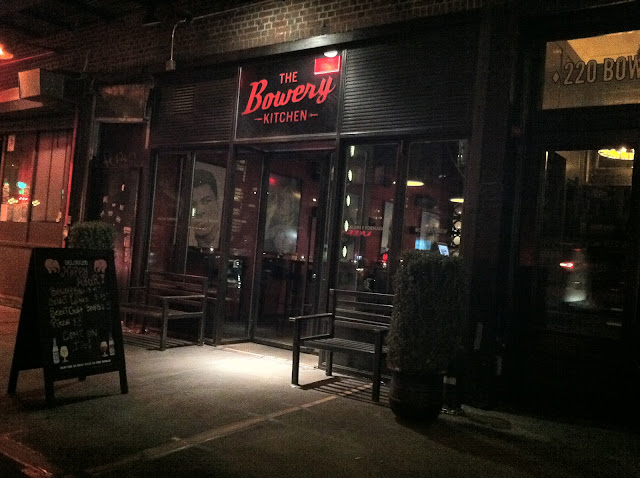 
220 Bowery first opened its doors as The Prince Hotel in 1927. By the 1940s, in an era when the Bowery was known as New York City's "Skid Row," the hotel had been transformed to accommodate soldiers returning home from World War II. All of the floors were rebuilt with single room cabins, bunk rooms, and communal bathrooms to maximize occupancy and the hotel became more akin to a flophouse. While these rooms were meant to be temporary lodging, guests of The Prince Hotel could indulge in all of the vices that the neighborhood provided and many of its occupants stayed on for extended periods of time. It is these very residents that would later add the lore of the Bowery.[2]

Since the 1990s the area has been reviving. The establishment of high-rise condominiums and the emergence of upscale businesses on the Bowery marks a new era for the ever-changing neighborhood. Part museum and part hotel, The Bowery House strives to preserve the rich history and integrity of the original structure while simultaneously providing chic accommodations for travelers from all over the world.[3]


The hostel re-opened about a year ago, under new ownership, after restoration.

The dimensions of the cabin are roughly thus: 6' by 8' by 7', with a wooden latticework "roof" over top of each cabin. The building itself has a relatively high ceiling on the main residents floor, extending over my head by at least ten feet. I can imagine the Bowery stacking bunks to the ceiling immediately after the war.

The bed is full size - or comically small.

A hand blown electric lamp is provided along with two NEMA-15 style power outlets, a small desk with two drawers and a small shelf above the bed.

After three days, I still haven't opened the drawers, but I suppose the Gideon family is likely to have contributed.

Several rooms of bunk beds also exist, for the truly adventurous, or those unhindered by total lack of privacy and unperturbed by proximity. Cabins are side by side,  and the open roofs mean that any sounds can be heard throughout the whole room.

Each room comes with a single towel, refreshed once a week, and a complementary pair of foam earplugs.

Generally, men and women are separated out; however some couples room/bunk together.

Either side has gender specific bathing facilities which are dormitory style: a single, private half bath (toilet and sink) plus a shared bathroom with three shower stalls partitioned on three sides by walls and one by a curtain, small wooden palettes replace the standard rubber bath mat you'd find at your local gym.

The sinks are large and marble, as are the floors. Piping must run under the marble tiling as they are not cold to bare feet.

The marble tiling, floors, ceilings, lounge furniture and "astro turf" roof-top garden are all hand-made by the new owners. 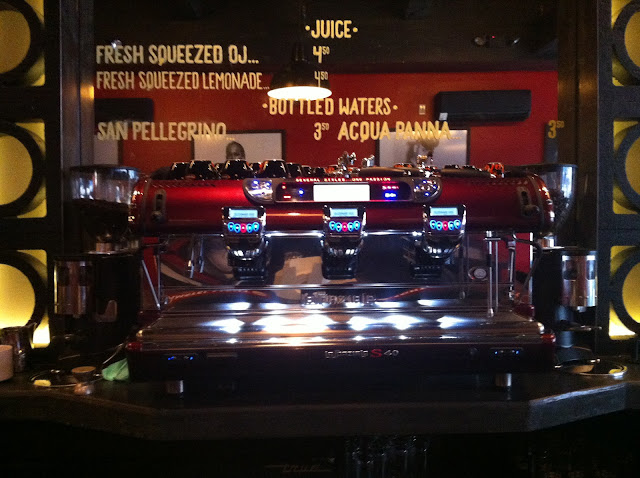 My first night was interrupted by constant loud snoring in the next cabin. That was Wednesday night, and I checked in late, around 12:30. 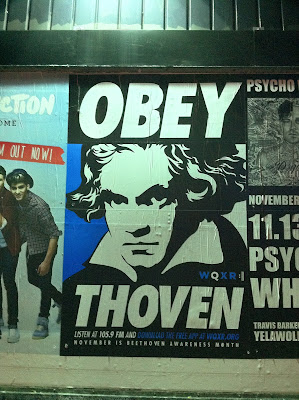 My second night, the natives were getting feisty:

A possibly mentally ill man carried on loudly describing the Bowery House to an unseen person, perhaps over the phone but likely non-existent, and had to be shushed several times by staff.

Then came the drunks. Oh, the drunks. Suffice it to say, headphones or earplugs came in handy but who would want to miss the sheer entertainment value of drunks fighting and making up and fighting again in multiple languages in New York City?

Night three was much the same, except I had armed myself against insomnia with a bottle of wine followed by many $1 PBRs and several shots of Jim Beam in Brooklyn. But we shall speak of the best bar in Brooklyn later.

Would I do it again? Sure. But after I come back to the city from upstate, I'll be treating myself to a real hotel room. 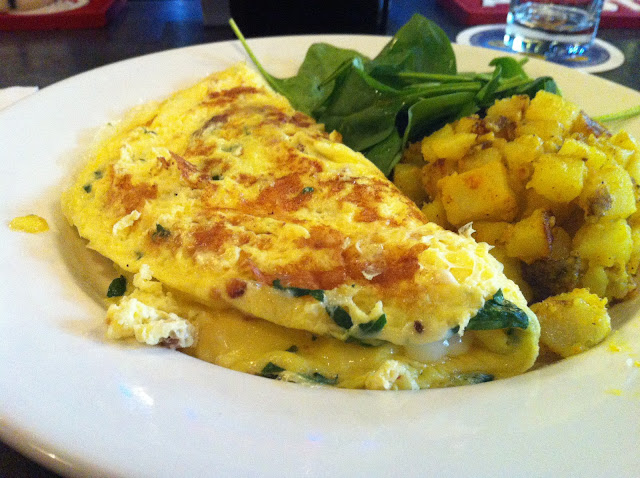 "The restaurant opens at 8am every morning if you want coffee or breakfast. They serve breakfast all day," said the lovely receptionist of undetermined ethnic origin, on the night of my check-in.

I was up and showered by 6:45 after attempting and failing to sleep. At 8:05, after lounging on polished leather sofas noodling around on the Internet, I went downstairs, hungry and in need of caffeine.

I was informed by the man sweeping up inside that they would be open "just as soon as the chef arrived". I bid my time. Ten minutes later, "well, can you at least make me coffee?"

A comely barrista made me an iced coffee, instinctively adding milk and sugar. The same young woman was spotted manning the reception area days later.

The chef finally arrived and was able to fire my omelette by 40-past the hour: bacon, spinach and cheese.

Some indeterminate time later it arrived, full of stringy melted mozzarella and salted the way only a professional party monster could. Omelettes come with a side of curried home fries, good, but also over seasoned, and lightly dressed spinach salad.

Despite the delays I still had time to kill, and time for a double-pull of espresso. This was remarkably good espresso.

Good espresso puts me in a generous mood: I quickly forget the late start and the heavy handed salting. 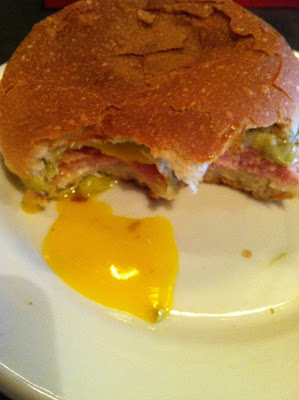 The breakfast sandwich is pretty good: it's a sunny side up egg atop a pile of thinly sliced boiled Italian ham (prosciutto di Praga), Fontina cheese and a light schmear of avocado on an over-sized potato roll. For the lightly hung over, this is a good balance of salt, fat and potassium from the avocado to replace what you lost in your sleep.

Also good was the home-made granola and yogurt, which was a nice, large serving for the money.

But where Bowery Kitchen, which opened three months ago (let's call it four, knowing my editorial schedule), truly shines is their Italian pastas. The hotel and restaurant are 2/3rd owned by Italians ("Ciao! Eh, wouldn't it be a-groovy to have a hotel in the Manhattan? Ma bella!"), and the chef is Italian.

The web site claims to have the best ravioli in Manhattan. I know this is not true because I've been to Mario Batali's Babbo, but for the money they make a respectable run at the title.

I had a dozen raviolis after a night of imbibing, six each of the porcini stuffed and mortadella stuffed. Both were excellent, served with a Parmesan cream sauce that struck the right balance of salt. Black sesame seeds garnished the works, adding a nutty bitterness to the dish that complemented the richness of the sauce.

The noodles were toothsome - allowed to air dry just enough during the course of the day - and had a good bite to them. I washed down them with a glass Nero D'Avola, one of half a dozen Italian reds offered by the glass or bottle.

The drinks menu is beer and wine only, featuring another half dozen Italian whites, Prosecco, a sparkling Sebastian-Provenza, and a rosé from Lusvardi.

The restaurant has a selection of local and imported draft beers including the Bowery Brew made in nearby Westchester County in the Kolsch style using imported German yeast. I'd drink it again.

A short walk will land you in NoLita (North of Little Italy), Little Italy and a slightly longer walk will get you to the Lower East Side.

The Bowery is essentially in Chinatown, but the gentrified quarter of it. As mentioned before, this was once skid row.

At my age maybe I don't have any business staying at hostels, but this was definitely a fun (if not all the time) experience. The staff at the Bowery House and Kitchen is young and enthusiastic, they seem to not have a ounce of the willful apathy that plagues many of their peers.

The place is clean and relatively drama free. The food is pretty good and the neighborhood is a great location for the casual New York tourist between 18 and 40 years old.

I'd recommend it as an option for the spend-thrift traveler to Manhattan, if creature comforts are not a priority.