Photo of the Day: Negroni at Le Bar at Marché 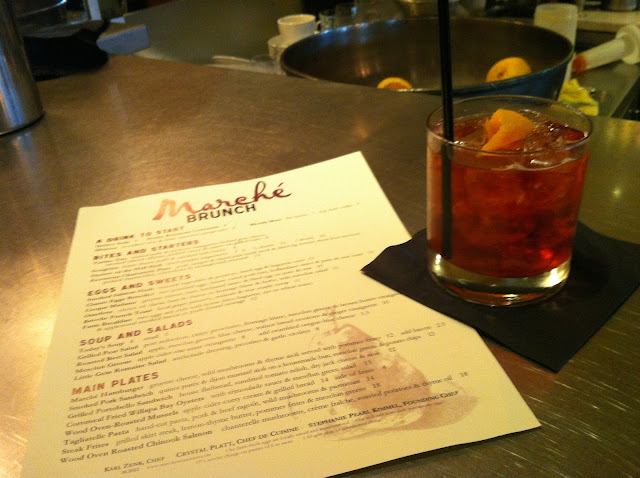 Le Bar at Marché is the bar (and restaurant) attached to Eugene, Oregon's brand new "boutique" hotel, Inn at 5th.

The hotel features a day spa, 24 hour fitness center, hair and nail salon and the 5th Avenue Market aimed at attracting Western Oregon and Eugene's monied visitors and seperating them from the contents of their pocketbooks.

Just as in Portland, we managed to get a better than peak-season room rate for a single suite that overlooked 5th Street on a small balcony.

I bellied up after checking out for a Negroni (that's equal parts gin, Campari and sweet vermouth, I take mine on the rocks, with an orange peel, $10).

For some reason or another the bartender, a man in his mid 20s, and I got to talking about bitters. They have the full line of Fee Brother's (Rochester, NY) bitters including the Whiskey Barrel variety, which adds charred French Oak to their standard herbacious (and, in my opinion, cinnamon of Ceylon hinted) "old fashioned" bitters.

As this happened, workers took apart a pumpkin that must have weighed in at over 1000 pounds. I didn't dare ask if it were organic, nor did I get pictures. Sorry!