Put a Chowbacca! On It: Hotel Vintage Plaza & Pazzo

I pulled into Union Station just after 3PM having been updated on the final and ongoing scores of that Sunday's NFL games (go Browns!) but the day's real game of interest would not be for a couple hours.

I'm tired, dirty and hung over thanks to a well-celebrated wedding (and more to the point, the aprés wedding party). I check into the hotel, experiencing déja vù (it turns out this is the same hotel I stayed at, on my father's dime, on a prior trip to the northwest - the hotel hosts a daily free wine happy hour from 4-6PM) and collapse in my room, drawing a monster sized bath in the suite's featured amenity: a jacuzzi (big enough for two adults, but I have yet to test that out).

Soon it dawns on me that I haven't eaten.

I pick up the advertisement material for the attached restaurant, Ristorante Pazzo.

I'm tired, and I'm not feeling terribly creative. I message my pal Lisa to come meet me downstairs for dinner.

"Bring a bathing suit if you want, but I'm probably crashing right after dinner." 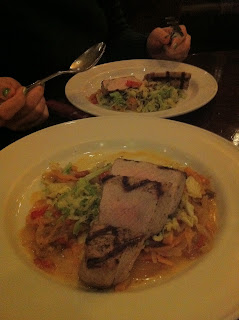 I opt to sit in the bar side (as opposed to the dining room) because there is one very important event going on that evening on TV.

Not storm coverage or election coverage.

Game 4 of the World Series.

The waitress explains to us the specials and whispers that the bartender is from Michigan. Ouch.

For appetizers, Lisa and I split an order of liver paté on crostini. The paté was fatty and sweet, and not overly tinny (probably aided by the addition of apples or hard boiled eggs).

We rolled the dice on a beet and cucumber salad dressed with a horseradish moscapone. This was an interesting touch, and I like how it tasted, but I felt that the app was missing some kind of tart or acidic element, maybe some greens or herbs, to balance it out.

For a pasta course, Lisa and I passed gnocchi with braised short ribs as well as linguini with clams back and forth (the portions were sizable enough that I took a good deal of both back up to my room).

The linguini with clams used a familiar commercially available dried pasta, which is fine, and the noodles had a nice tug to them. The whole shebang was run under the broiler with bread crumbs and herbs. There was a surprising amount of heat - something that one might experience in Actual Italy but rarely on this side of the Atlantic, so kudos. I would have liked the addition of capers.

Similarly, the gnocchi had the markings of a dish made with deference to old-world ways: a well cooked down tomato sauce accompanying slowly braised, tender and fatty short ribs and a generous shaving of Parmagiano-Reggiano.

The dumplings were very soft, indeed. Perhaps a little too. The debate rages, even between Lisa and I - even internally with my own mind - as to when a dumpling is too soft, too tough, undercooked, overcooked.

In this case, I would have preferred a bit more backbone.

We split the pork loin entrée for our main course. I am not going to complain about it being medium-well as I've accepted the fact that most of the world isn't ready for medium or medium-rare pork yet.

A flavored salt was used to season the pork, grilled over high heat with nice charred grill-markings.

Cabbage and peppers accompanied the loin. An additional crispy element was lacking - as was a sour element - Lisa and I agreed.

Much of dinner was boxed to-go (and consumed early morning by yours truly), so we had sufficient room for dessert: a locally made tart from the adjacent bakery, the Pazzoria.

By the time our check came, the Giants had swept the Detroit Tigers and it was time for sleep. 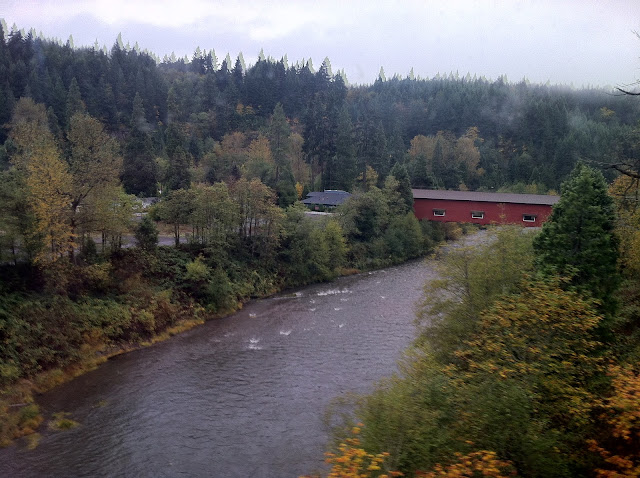 Pro-tip: always go back and talk to the bartender for hot tips and deep-background.

Professional travel tip: I hate tourists, even more than our fearless leader may hate food blogs.

Which means that I travel cheap(er than most). Think about it: if the tourists like warm weather and sunlight, then October through February is the "off-season" for places like Portland and Seattle, barring the holidays (a time no sensible person would set foot near a bus depot, train station or airport).

Hotel rooms are offered at discounted rates and even hot dining destinations are not off limits for those who don't have enough love in their hearts to stand in line to sit around a restaurant (perhaps more to be seen than to eat).

I upgraded to the largest room the hotel had to offer, complete with a "jet spa" (akin to the trademarked Jacuzzi™), stationary exercise bike and work-out gear (including yoga mat, naturally) and two stories (a lounge and office occupies the lower level) and I paid less than half the room's seasonal rate.

I could have probably bargained that down further.

These types of rooms are out there and you don't need "Hotels.com" or some similar service to find them ... Folks, you haven't lived until you've had a bed with a chandelier overhead like they do at some Four Seasons Hotels for 1/4 the price.

Of course, I am not alone in my travel misanthropy (or more to the point - my disdain for destination travelers who stay close to the proscribed path, herding their kids and shopping bags from places like San Francisco's Union Square to Fisherman's Wharf to Alcatraz and back).

I am much more in line with (if less adventurous than) a person like Anthony Bourdain, who purports to have the right mix of misanthropy and curiosity.

And, I am a leafer. Hence, Portland in late October.

Founded by Bill Kimpton 31 years ago, Kimpton Hotels and Restaurants are definitive of the genre of "boutique hotels" just like Landmark Theatres are definitive for "Indie and restored movie theatres."

Boutique hotels service a niche market and niche needs, certain tastes and proclivities. There are of course boutique hotels that predate the Kimpton chain (especially up and down the California coast), rescued relics of the 1950s era of the Eisenhower Interstate and the Sunday driver, road-tripper and the motor lodges that accompanied them.

Across the Willamette right here in Portland lays the Jupiter Hotel, a rescued motor lodge turned into a hip, florescent lit, tongue-in-whatever-cheek-you-prefer destination for young lovers and touring musicians.

But the Hotel Vintage Plaza, right in the middle of Portland's tony Pearl District, probably caters more toward people my father's age (retired or nearing it) than my own - which makes me feel old.

Each suite is adorned with the name of a vineyard, each room has a "gift" (the gift is you give the hotel extra money if you take any of it) basket offering a full bottle or split of Washington, Oregon or California wine, a branded wine key along with the normal offerings of bottled water and candy bars.

"Please," they urge, "take our stuff." In each room's closet: branded terrycloth robes, non-slip socks, towels, a reusable shopping bag and the like. All for the price listed on a laminated card tucked behind the larder of snacks and trinkets.

The locally themed ad material, the only thing truly free to take (not counting the pens and stationary, naturally), comes in the form of several glossy "magazines" highlighting chic local dining and drinking for monied guests.

While not the fanciest hotel in Portland, nor the hippest, the Vintage Plaza certainly deigns to cater to the wealthier traveler, hip or unhip (sorry, Dad).

A great stay, but next time I'll slum it with the rock stars and swingers at the Jupiter for a third of the price (a hotel that will definitely make up the difference having cocktails at their adjoined cocktail lounge, the Douglas Fir).