Welcome once again to Recipoos, where we separate the wheat of recipes available on the Internet from the chaff and then brutally mock the chaff!

What does a million dollars get you these days? If you believe the arguably named blog The Creative Kitchen it gets you a trough of lazy-assed lasagna. And if anyone ever walks into your party or wake with a pan of this slop give 'em a swift slap in the slop hole with the cookbook of your choice. 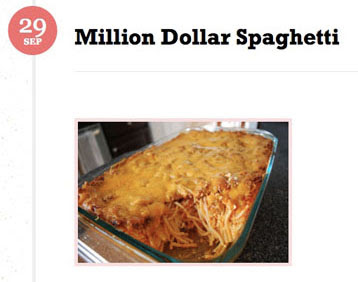 I've seen dog food selling for 99 cents that was more appetizing than Million Dollar Spaghetti, and the ingredients might even make Paula Deen nauseated.

A "small bag of Sharp Chedder (sic) Cheese"? I suppose that food in a trough makes sense for people too lazy to grate their own cheese or to use spell check. And let us be clear, that's a "Whole Stick of Butter". Be sure to scrape the wrapper.

Would "heat, mix in a trough, serve" have sufficed for directions? Of course, but the author was kind enough to provide detailed, and hilarious, directions for the truly thinking-impaired. 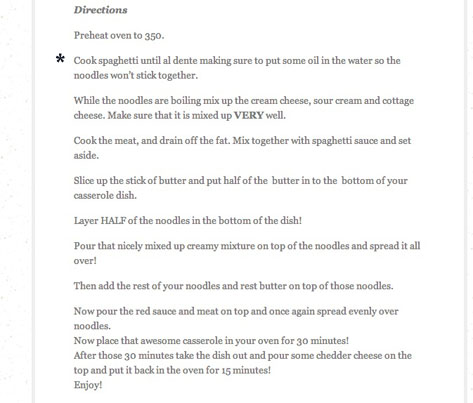 *If you believe this hokum Old Doc Gus would like to seal in your juices.

Apparently, being creative these days involves finding new and disgusting ways to mix processed foods together with a minimum of effort. Thanks for sharing, Creative Kitchen! Maybe if you spent less time blogging about your creations you could find the time to actually cook? On second thought, just stick to frozen pizzas.
Email Post
Labels: Humor Million Dollar Spaghetti Recipoos Spaghetti The Creative Kitchen